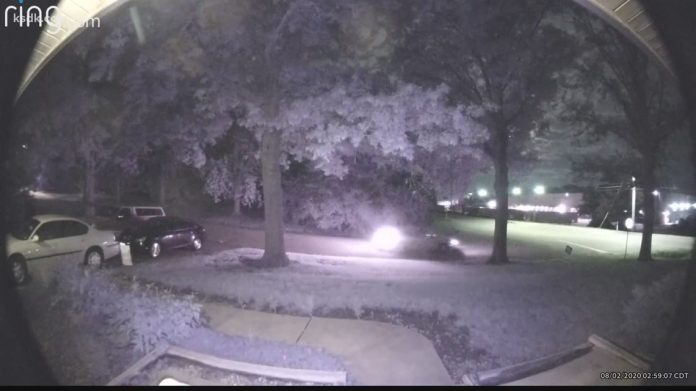 HAZELWOOD, Mo. — A family of five is on the lookout after their car was stolen in front of their home.

Surveillance video shows the car speeding down this dead end, but the owners say they were not the ones behind the wheel.

“We walk out and he’s like ‘Katie wheres my car,’ I’m looking across the street, I’m looking in the circle, and I’m like Eric I don’t know where your car is like it is gone,” said Katie Jenkins.

Jenkins and her fiancee came out to the rude awakening Sunday morning.
Their green truck was stolen around 4 a.m. in Hazelwood.

“It makes you feel unsafe, we’ve never had any crime happen on this stret its very quiet, it almost makes you want to just pack up your stuff and leave,” said Jenkins.

They believe the theft was part of an elaborate scheme. Ring doorbell footage shows a driver pull up at about 2:50 a.m. lets someone out, then an hour later their car is seen driving off.

“A truck up here in the circle was broken into a truck in the driveway next to ours was broken into, a couple cars up the street from us were broken into,” said Jenkins describing the other homes that were targeted.

Hazelwood police say its an issue throughout the entire region. They’ve been posting a daily reminder for people to lock up after 9 p.m.

“The car had sentimental value as well so we kind of just want it back it had our kids three car seats in the back, not that we can’t buy new car seats, we can. the car just had more meaning than just being a car.”

The vehicle they are looking for is 1999 green Chevrolet suburban. License plate JC5X5M. Anyone with information is asked to call Hazelwood police.