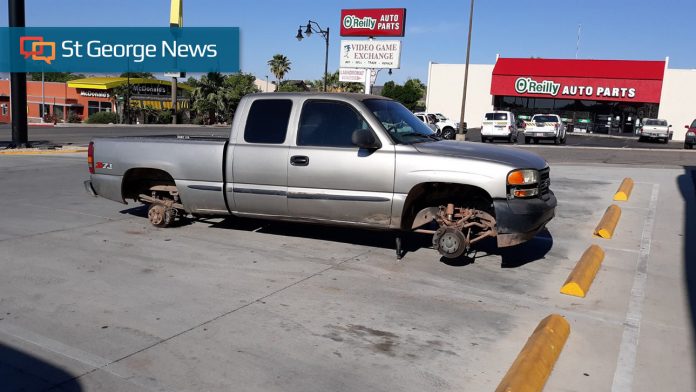 A car had its wheels and tires stolen after being serviced at a tire store on St. George Boulevard, St. George, Utah, June 24, 2020 | Photo courtesy of Greg Gentry, St. George News

ST. GEORGE — Greg Gentry, the owner of Utah Car and Trucks on Bluff Street, was surprised to wake up Wednesday to a call about the wheels and tires being stolen off a vehicle he had taken to a local tire shop for service.

Gentry told St. George News he took one of his trucks from the dealership to the tire store for service on Tuesday. When the truck was finished, it was parked outside of the store and was left overnight, something which had he had done several times before, but in this instance, the store called him at 7:45 a.m. Wednesday with bad news.

“They said, ‘You might want to come look at this,’” Gentry said. “It was my 2001 Chevrolet Silverado. I had it up there for service and an oil change, but it stayed overnight. I don’t ever have a problem with it staying overnight, but somebody jacked it up and stole the wheels and tires.”

The wheels and tires on the Silverado were good quality, Gentry said, adding that they were BF Goodrich tires and black aluminum wheels. The truck had been repossessed by a local bank, and Gentry was looking to get it detailed and serviced before they tried to sell it.

When he arrived to see the truck, he noticed that whoever took the wheels left the front end of on two shocks from the tire store. He said he has been getting his cars serviced at the location for about 30 years and has never had any problems.

Usually Gentry’s vehicles are left outside, just like this instance, and he would come by to move them whenever he was available. He said he either goes by late to pick them up or he will just pick them up the morning after.

“I could’ve sold the truck with them after the service and detail was done,” he said. “I guess I’ve got to deal with this now.”

Gentry filed a police report with the St. George Police Department. Public Information Officer Tiffany Atkin told St. George News this is not something they usually see, and she was also surprised it would happen in such a heavily trafficked area.

“It happens once in a while, but it’s usually in response to something,” Atkin said. “It’s a crime of opportunity a lot of the time. We’ll see Ring (doorbell) cameras where people will be walking along and testing doors or they’ll look over and see a garage door open. It doesn’t matter the time of day or the neighborhood because crime happens everywhere,”

Gentry said that he will be investing in a security system for his business as a result of the incident. He added that neither the tire store nor the auto parts store across the street has security cameras.

“I’ve lived here all my life, and I think St. George is finally there,” Gentry said of the need for a security system.

Ryne Williams was a Scholar-Athlete, earning CCAA Second Team All-Conference honors while playing Basketball at San Francisco State University. He is a graduate of the University’s College of Liberal and Creative Arts where he double majored in Broadcast and Electronic Communication Arts and History. A former host for the campus radio station, KSFS, Ryne previously worked for the Golden State Warriors and Oakland Raiders flagship radio station, 95.7 The Game.

What the Four Wheeler and Truck Trend Network Staff Drove in...

Every car has a story | Select | norfolkdailynews.com – Norfolk...