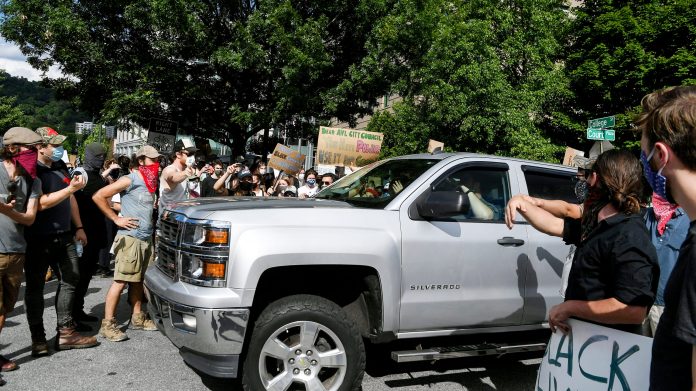 Brandon Meyer recounts what he saw when the driver of a pickup truck approached demonstrators in downtown Asheville.

ASHEVILLE – A tense, 35-second clash between protesters and a pickup driver June 9 was the most compelling action of the day in the continuing demonstrations related to the death of George Floyd and social injustice.

While demonstrators blocked the roadway as Asheville City Council met Tuesday to discuss the removal of Confederate monuments and police funding, the driver of a pickup truck approached the crowd from a parking lot with the tires of the vehicle turned right, in the direction of the crowd.

Protesters then surrounded the vehicle but gave way, with some motioning for the truck to turn left.

A pickup truck approached demonstrators from a parking lot June 9. The driver’s tires pointed to the right as protesters surrounded the vehicle. They gave way for the truck to turn left, which resulted in a standoff between the two. (Photo: Angela Wilhelm/awilhelm@citizentimes.com)

The driver of the truck seemed to take exception to that, and the result was a standoff between the two.

Seconds later, the driver began driving through the crowd, pushing out of the way a few protesters standing in front of the vehicle, while others began beating on the driver’s window and other parts of the truck.

While some of the protesters called for the driver’s arrest, APD spokeswoman Christina Hallingse said officers did not have enough evidence to make an arrest.

She said the driver of the vehicle was headed toward the Vance Monument on College Street and turned left into the parking lot directly in front of City Hall, even though the area was blocked off.

No one appeared to have been injured in the incident, and Hallingse said officers found no one in the crowd who wanted to come forward and press charges.

“If anyone was hit, or has video of anyone being hit, we would encourage them to contact APD,” Hallingse said.

She added that the crowd caused “significant” damage to the vehicle.

People chase after a pickup truck after the driver pushed through protesters June 9, 2020 in downtown Asheville. (Photo: Angela Wilhelm/awilhelm@citizentimes.com)