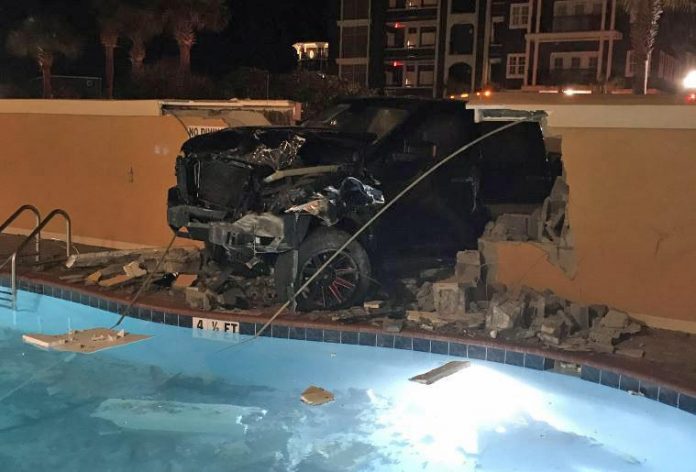 Witnesses said they saw Travis Brady behind the wheel of the truck when it smashed through the pool wall at a condominium on Scenic Highway 98 in Destin, where it almost plunged into the water.

DESTIN — A 24-year-old Fort Walton Beach man crashed his truck through a wall around a condominium’s swimming pool Thursday morning, causing thousands of dollars in damage to the structure, law enforcement officials say.

Travis Brady also refused to conduct a field sobriety test for impaired driving or provide a breath sample to Okaloosa County Sheriff’s Office deputies, according to an arrest report.

Who in the Santa Rosa, Okaloosa and Walton County area was arrested yesterday? Consult this arrest database compiled from data provided by all three counties..

Witnesses said they saw Brady behind the wheel of the truck when it smashed through the pool wall at the condo on Scenic Highway 98 in Destin. The pickup almost plunged into the water.

A surveillance camera captured the impact.

A deputy at the scene said Brady, who was not injured in the crash, made a comment that he was driving drunk.

He was charged with driving under the influence.