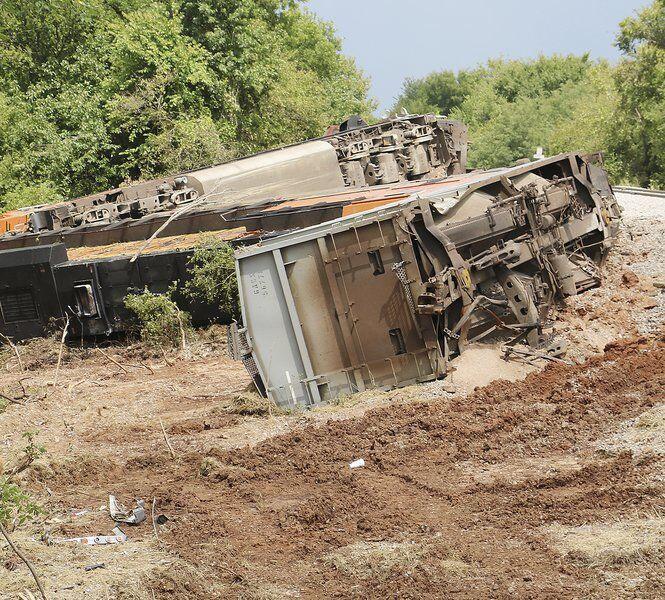 A motorist’s failure to check for a passing train is the listed cause of a collision that sent more than a dozen rail cars off the track near Pauls Valley this past weekend.

It was around noon Saturday when a semi truck driven by 70-year-old Gary Lile of Lindsay was struck by a train at a site just a couple of miles southeast of PV.

A total of three engines and 11 container cars were sent off the tracks as two from the train, including the conductor, and Lile were all taken to area hospitals to be checked out for injuries.

Officials described it as a “pretty big deal” that could have been far worse as the 11 cars normally carrying ethanol just happened to be the empty when the collision occurred.

The real danger came from two of the three engines as authorities responding to the wreck site found they were leaking diesel fuel.

“None of the impacted cars were leaking,” Garvin County Emergency Management Director Dave Johnson said about the containers holding only ethanol residue at the time.

“We were lucky we didn’t have a lot of stuff go into Rush Creek.”

Estimates are the train was traveling around 50 mph when it collided with the semi truck, which was attempting to cross the tracks while driving on a private road about one mile south and one mile east of Pauls Valley.

An Oklahoma Highway Patrol report released Sunday shows the conductor of the Burlington Northern Santa Fe trail pulling 95 cars was David McWilliams, 52, while a train passenger was Luis Riojas, 48, Both are from Midland, Texas.

According to the report, Lile was alone while driving the truck on County Road 1590. He then failed to yield to the train as the roadway crossed the tracks on a private road.

Lile was pinned in the truck for about 45 minutes before being freed by Pauls Valley firefighters using hydraulic tools.

Lile was airlifted to OU Medical Center in Oklahoma City and admitted in stable condition with trunk internal, leg and head injuries. It remains unknown if he was wearing seat belts at the time of the accident.

As for the wreck site, a barrier has been set up to prevent for now any crossings there as the engines and train cars derailing remained on their sides earlier this week.

“The clean up is still ongoing,” Johnson said.

“That other train derailment in Wynnewood a few weeks ago, they’re still cleaning up that one.”

He adds train officials are the ones overseeing the clean up efforts at both wreck sites.

Coronavirus: Drivers stop to pick up 1,000 face masks thrown from...