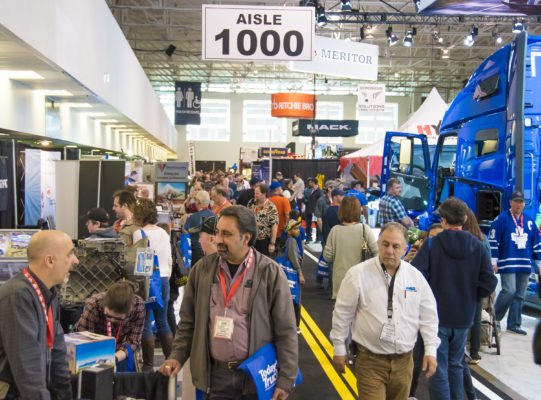 TORONTO, Ont. – Covid-19 has claimed another trucking industry event, with news that Truck World 2020 has been officially canceled.

Registered exhibitors were informed of the cancelation this morning through a letter from the joint owners of the biennial event – Newcom Media and Hannover Fairs. (Newcom Media also owns this website and related publications.)

“As recently as last week we were having positive conversations with the Ontario government, the International Centre, and key suppliers about hosting a safe and successful event this September,” wrote Newcom president Joe Glionna and Hannover Fairs CEO Larry Turner. “Unfortunately, those talks stalled and government is not able to commit to increasing event capacity at this time. With this information in hand we had to make the decision to cancel Truck World.”

The show’s original April dates had first been rescheduled to June and then to Sept. 24-26 as a measure of caution and responding to evolving public health recommendations.

“Every organization and individual have had to make choices over the past months based on a variety of factors, health and safety being first. Many of you had already decided to cancel your participation in the show. However, with most exhibitors still committed and roughly 5,000 registrants indicating they planned on attending, we remained dedicated to hosting Truck World for those that wanted to have it,” Glionna and Turner wrote.

“While we are disappointed that we cannot produce Truck World this year we are eager to start working on the show for 2022 where we will focus on rebuilding and reconnecting the trucking industry in Canada,” they said.

The next HighwayStar of the Year Award – which recognizes a top Canadian truck driver, and has a prize package that includes a trip to the show to receive the honor – will now be awarded at ExpoCam. That show is scheduled for May 13-15 in Saint-Hyacinthe, Que.