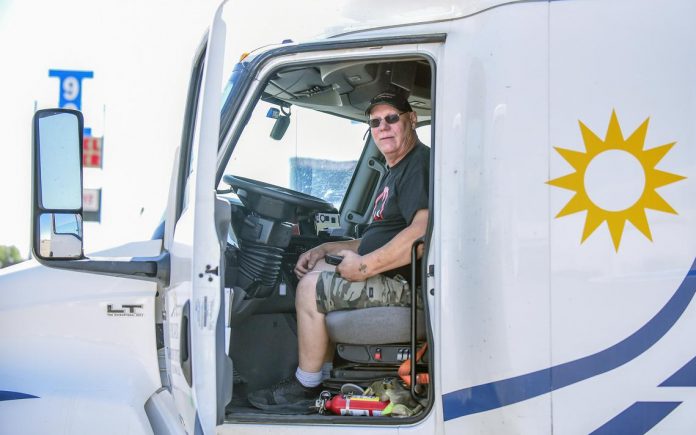 While satisfying his hunger made up a small fraction of the Canadian truck driver’s excitement to see a traditional restaurant open amid the COVID-19 pandemic, it was the thought of a server greeting him, taking his order and engaging in small talk that filled him with the most joy. Having gone the past two months without being able to enter a traditional restaurant filled with friendly faces awaiting to serve him a hot and fresh meal, walking through the doors of Marlin’s Family Restaurant was Holmes’ first taste of normalcy since the novel coronavirus virus prompted restaurants across the nation to shutdown.

“This is the first restaurant that I’ve been able to get a table inside and eat at since everything began closing down,” Holmes said from the driver seat of his semitrailer. “Being able to go in and sit down and relax with people around you is really one of the biggest things I miss. It’s always fun meeting new people on the road.”

Trucking across regions of the country for up to 10 hours at a time without making a stop, while maintaining focus on the road ahead, the experience of dining inside a traditional restaurant provides more than just a meal for many truckers. For Holmes, enjoying a meal in a restaurant fills the void of interacting with others after being alone in the driver’s seat for hours on end.

But as the severity of the virus outbreak intensified in early March, prompting many states to close diners, restaurants and fast-food chains, truckers were faced with growing challenges in their search for food options while on the road. Deemed an “essential worker,” per the federal government’s classification, Holmes is one of many truck drivers who has been tasked with continuing his vital job role amid the statewide shutdowns and lockdowns, regardless of whether he has a place to eat, rest or shower.

“This isn’t an easy job, and I see it as a lifestyle more than it is a job,” Holmes said. “You have to roll with the punches.”

As he crosses upward of 10 states during a given trek, each state has its own set of restrictions for COVID-19, ranging from strict lockdowns to widespread business closures, making Holmes’ and many fellow truckers’ jobs more difficult. South Dakota was one of the eight states in the country that steered clear from enforcing a lockdown that typically entails residents being told to “stay-in-place,” which ultimately leads to more business closures and red tape.

For Montana-based truck driver Myron Aeschbacher, pulling into the I-90 Truck Stop on Wednesday afternoon provided a breath of fresh air and much needed hygiene, as it housed one of the first full-service restaurants with no restrictions, along with a shower room awaiting him, something Aeschbacher had to go without nearly the past two months when he’s on the road.

“Some of the states I travel through in the South are starting to slowly open things back up, but there are so many restrictions for eating in a restaurant that it makes it hard to get a table,” Aeschbacher said. “I’ve seen some places allow only 25 to 30 people in the same restaurant at once with a waiting line.”

Considering some states have gone as far as closing truck stops that house the only shower rooms many truck drivers rely on for hygiene while they are completing a near 1,000 mile route, the challenges keep piling up for transportation workers.

“Sometimes, you have to rough it for as long as you can until you can make it back home,” Aeschbacher said, noting some hotels are also closed in some states. “I hope things start to turn the corner sooner than later. I haven’t seen anything like this in my lifetime.”

What happens when a semi breaks down in a state under extreme restrictions and lockdowns measures? That’s a question Aeschbacher hopes to never find the answer to, as he’s witnessed some semirepair shops have been closed due to the virus.

However, South Dakota is one state truck drivers won’t have to worry about there being a lack of semi mechanics available, as a local diesel mechanic shop, A&G, has been open throughout the virus outbreak. Just 15 miles south of Mitchell sits Wolf Auto and Truck Repair in Parkston, a shop equipped with semi mechanics.

Comparatively, Aeschbacher said he’s put on a little extra miles over the past two months than what he usually does in previous years, putting more strain on his truck. With the volatility of the livestock industry that’s intensified amid the pandemic, Aeschbacher’s commodity feed he transports primarily to dairy and cattle farmers is a vital product for the U.S. food supply chain.

Tony Wolf, owner of Wolf’s Auto and Truck Repair, has experienced an uptick in semi repair work over the past several months. As truckers continue transporting vital products, goods and materials around the area, Wolf’s repair shop continues to have plenty of work on its hands.

“Our truck business has been doing really good lately, because the freights always have to be hauled,” Wolf said. “Whether it’s hauling pigs or cows, people have to eat. A lot of miles are put on trucks, and that hasn’t changed with all this going on.”

What were once bustling interstates and highways, packed with cars and motorcycles, are now bare stretches of roads. Holmes can recall the busy traffic flow on American and Canadian interstates before the pandemic. But all that changed, seemingly overnight, when the virus swept across North America in early March. While the reduction in traffic makes for quicker trips for truckers, Holmes said it’s an eerie sight.

“The little traffic is technically good for us in terms of the less time our travels take, but you feel like you’re in a Stephen King movie after a while,” Holmes said of the bare roads. “Everything just suddenly changed at the flip of a switch. I never thought I’d say I miss some of the traffic.”

The final step in the long transportation process also has looked a lot different of late. The delivery exchange of products and goods Holmes transports to American and Canadian businesses used to entail greeting one another, followed by a substantial amount of paperwork for both parties.

The amount of paperwork that typically comes with a delivery is at times daunting. As a result of the virus, however, many companies receiving their goods have been easing the paperwork in an effort to reduce hand-to-hand contact as much as possible. It’s one change the novel coronavirus has caused that has provided some benefits for Holmes.

“I haven’t even been inside a location that I deliver to for two months. A lot of the paperwork is done digitally now, so that shaves quite a bit of time off,” Holmes said. “It all works out, but it is just more tedious than the traditional paperwork style of forms and orders that we exchange.”

But on the other hand, the elimination of paperwork and hand-to-hand contact is another loss of interaction with people along the journey on the roads.

To suffice for the dwindling interactions he and many fellow truckers now face, Holmes has turned to satellite radio, listening to world news outlets like BBC. But with the novel coronavirus dominating news cycles across the globe, Holmes said he’s had to limit his listening time as it stokes unwanted fear.

“We are already spending many hours of the day trucking by ourselves, so talk about social isolation, huh?“ a joking Holmes said from the front seat of his truck. “A lot of times we will get out and talk to share some stories, but that isn’t happening now either.”

When the city of Mitchell’s shutdown ordinance went into effect April 3, specific types of businesses such as restaurants and bars were forced to either close or implement alternative operations like takeout and delivery service. Although the Mitchell City Council approved the shutdown ordinance in an effort to reduce the spread of the novel coronavirus, it made life much more difficult for truckers looking to eat a hot meal in a short period of time.

Throughout the 25-day shutdown, the 1521 S. Burr St. McDonald’s was one fast food restaurant that recognized the unique circumstance facing truckers amid the closure.

According to Jeff Prickett, manager of McDonald’s in southeast Mitchell, the lobby area where customers place their orders before finding a seat in the dining area was open to truckers and transportation workers, allowing them to enjoy a meal before they hit the road again.

“We had it arranged inside so they could come in and get their food, while keeping enough distance,” Prickett said.

Between the struggles of maneuvering an 8-by-13 foot semi truck in a tightly spaced drive-thru and restaurant chains having to follow safety protocols, drive-thru service isn’t an option for truckers.

That’s why McDonald’s decision to offer the carryout option has been so vital for truckers, but it took some disgruntled transportation workers sharing their stories of being denied food in the drive-thru for McDonald’s to implement the new service. After reports and videos that showed truckers parking their semis to walk up to the drive-thru and place their orders on foot only to be denied, McDonald’s responded by offering a takeout option and curbside pickup service known as McDelivery in late March.

“We can’t allow people to walk and order through the drive-thru because of the safety issues it would cause, so it’s nice to be able to open part of the lobby up for the truckers to get carry out,” Prickett said, noting the local McDonald’s location he oversees also opened up its restrooms for truckers.

As more light was being shed on the unique challenges that truckers were coming up against in the midst of the virus, acts of kindness were being offered in many parts of the country. For example, people in vehicles that were able to utilize the drive-thru

“Those stories of people doing those nice things are great, but I’ve only run into one person in Kansas who helped me get something to eat when I didn’t have any options,” Aeschbacher said.

While the virus outbreak has caused some unusual affairs for truckers the past two months, the cost of diesel fuel drastically dropping to around $2.17 is a first for Aeschbacher. In his 30 years of trucking, Aeschbacher has never witnessed diesel fuel dip that low.

Although lower fuel costs are typically celebrated as a gift for drivers filling up at the pumps, Aeschbacher said it’s led some companies receiving the goods that he delivers to negotiate reducing transportation costs.

“We’ve had some places try to drop the rates on us,” Aeschbacher said. “Just because fuel is going down so much, they think we can start hauling things for less. But that’s not how this works.”

This 1974 Chevy Blazer Is Just Rubbing It In