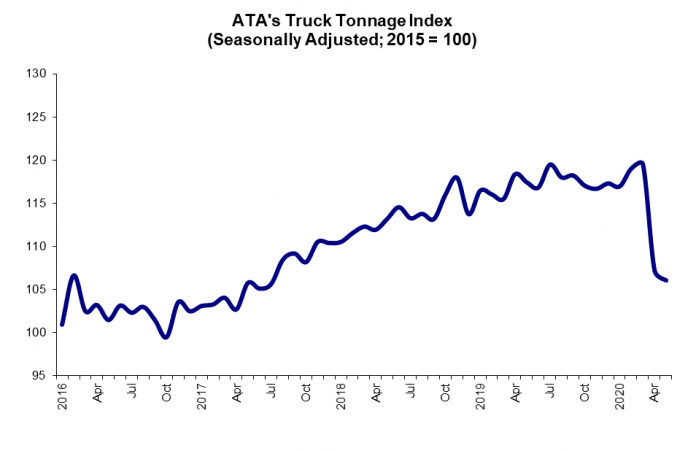 ARLINGTON,
Va. – For-hire truck tonnage continued to contract south of the border in May, but
the American Trucking Associations’ chief economist believes trucking will still
recover from Covid-19 more quickly than other industries.

“While tonnage fell in May, even though other economic
indicators like retail sales and housing starts rose, I’m not overly
concerned,” said Bob Costello, noting the ATA’s seasonally adjusted For-Hire
Truck Tonnage Index was down 1% after contracting 10.3% in April. The April figure
was revised upward after the initial report of a 12.2% decline.

“First, while down over 10% sequentially in April, truck tonnage
did not fall as much as other economic indicators that month. This means that
any rebound is tougher since tonnage didn’t fall substantially to begin with.
Second, there are indications that freight continues to improve as more and
more states and localities lift lockdown restrictions,” he said.

The May figure still represents the largest year-over-year
decline since 2009, during the Great Recession, but the index is not falling as
much as during that economic downturn.

“While the overall economy will likely take more than a year to recover, assuming the pandemic doesn’t spike again, the trucking industry could recover back to pre-Covid levels before many other industries because it hasn’t fallen as much,” Costello said. “As retail sales improve and housing starts recover, that will help trucking. The risk for trucking is that the virus surges again and places start to shut back down again.”

Removing the seasonal adjustments, and looking at the tonnage
alone, May’s index was 2.8% above the April level.

The For-Hire Truck Tonnage Index is dominated by contract
freight rather than spot market freight.