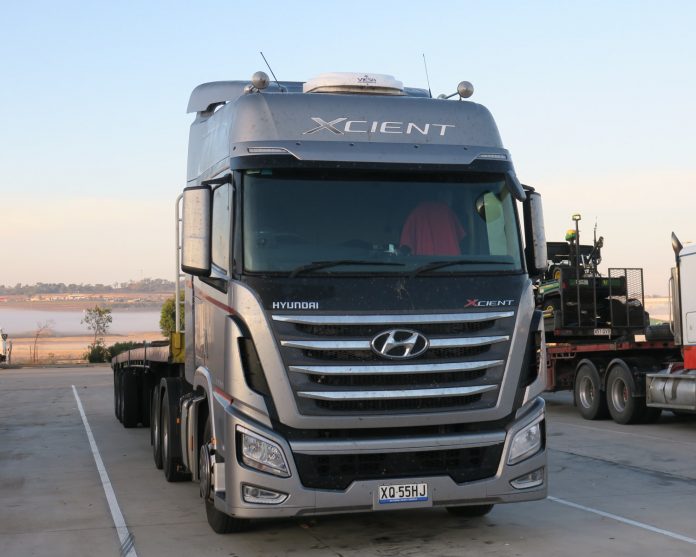 Steve Young is one of the few Australian trucking operators using a Hyundai Xcient prime mover. Steve Young and his Hyundai Xcient prime mover in Toowoomba just after he had delivered a load of timber to the local Bunnings. Steve’s business is all about hauling fencing materials for a large timber wholesaler Future Wholesale Timber based in Meadowbrook in Brisbane’s South. The major customer requiring timber for delivery are the Bunnings Warehouses dotted around SE Queensland.

“The hardest thing I have had with the new truck is coming from 560hp down to 520hp in a prime mover,” says Steve. “It is different, but I am very happy with it. I took the truck out the other day with a load on and had my mate with me. As I came up to some traffic lights and was showing him how well the retarder pulls you up, I just about put him through the windscreen. It’s unreal, and he was really surprised.”

The ZF retarder’s effect can be gauged by Steve when he goes into the vehicle info on the dash. He goes into the LCD screen menus and gets a reading on how well the brake wear is going. The system tells us the brakes have only worn down to 85 per cent, after the many kilometres Steve has done in the last twelve months. Steve reckons this is an excellent performance. In the same system Steve can access the axle weights of the load to help him gauge if the load is correctly placed on the trailer.

“That’s a real advantage to me as sometimes they will load you towards the front a bit,” says Steve. “You can get them to come back a little bit and make the load right. It’s pretty accurate.”

The area Steve covers with the truck ranges from Bundaberg, and occasionally up to Rockhampton, in the North, going South and covering the Northern Rivers area of New South Wales and Chinchilla is the furthest West the deliveries are needed. However, most of the deliveries are in the most densely populated area around Brisbane and the two Coasts, Gold and Sunshine.

“We can do anything up to five loads in a day,” says Steve. “Sometimes it’s just go, go, go. We still get good fuel economy running around suburban Brisbane, most of the time.

“When we run up to Bundaberg, I have been surprised by the way it handles the hill at Cooroy. It’s a hill which will often catch you out but in this truck I only have to drop two gears when I am fully loaded. It will just keep pulling in tenth gear and doesn’t lose speed.

“I reckon you could do a Sydney run with this truck and have no dramas whatsoever, if there is one thing, it’s probably that the fuel tanks could be a little bit bigger.”

In terms of fuel economy, Steve is quite pleased to be averaging between 2.4 and 2.7 km/l. An empty trailer gets the fuel use all the way up to 3.7 km/l.

According to Steve, the onset of Covid-19 saw the amount of work he was doing going crazy. The workload has meant that the timber wholesaler ended up running out of stock because demand in Bunnings went ballistic. Since then the overwhelming demand has returned to normal levels and the supply chain has been able to catch back up with more regular demand.

Running on standard hours at the moment Steve is looking at going to the Basic Fatigue Management level. The idea is to give him a bit more flexibility to ensure he can complete tasks well within the rules.

All of the servicing work Steve requires is handled by a local mechanic who he has learnt to know and trust over the years. The only other hands which will touch the truck are those at Transport Field Service in Warwick, where Steve originally bought the Hyundai last year.

Steve runs the operation in typical owner driver fashion with his wife handling the books and engaging a good accountant. Over the years Steve has found reliable services like his mechanic, someone to help out with truck finance and insurance, etc.

“I like to keep the truck and trailer well serviced,” says Steve. “My mechanic, John, reckons I go a bit silly with it, but to me if something goes wrong, fix it there and then, no problem.”

Overall Steve has now had a year with the Xcient, one of only a few which have made it to Australia so far. As a new truck to the market it will always have its detractors, but Steve has found that it delivers exactly what he needs overall.

There are a couple of things he wouldlike to change, the rear mudguards are very European and it would probably be better if the tighter Australian style mudguards were fitted. Also the bunk mattress could be thicker than the standard one supplied and Steve has already replaced it

If this is the only criticism Steve can come up with for a largely unknown quantity like the Xcient, then Hyundai have done well. For Steve the truck doesn’t cause any dramas, it is a comfortable truck with enough power to do the job and it saves the owner money while it’s doing it.

Elon Musk on Bill Gates having no clue about electric trucks