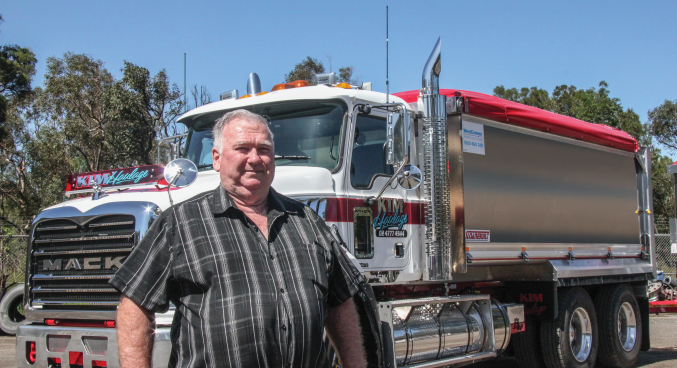 The initials in KIM Haulage represent Ken and Inga McClelland. Their specialty is bulk transport in which they use some innovative PBS combinations and state of the art technologies.

Based near the foot of the Blue Mountains at Londonderry in Western Sydney, KIM Haulage specialises in the transport of bulk materials using a modern fleet of Macks and Volvos coupled to some innovative trailing combinations under the Performance-Based Standards scheme.

A number of the KIM fleet are in Holchim livery as they are dedicated to transporting quarry products to that company’s batching plants in various locations throughout the Sydney basin. The KIM/Holchim trucks usually travel as far as Salt Ash near Williamtown, Marulan in the Southern Highlands and Albion Park in the Illawarra region.

Other KIM Haulage trucks are employed in moving material to and from Sydney’s many tunnel and infrastructure projects. Ken also has experience in bulk grain movements during harvest seasons.

Nine new Mack Granites with engines rated at 500hp were delivered at the beginning of 2020 bringing the fleet size to 35 trucks plus numerous trailers.
The advent of the Performance-Based Standards (PBS) scheme has changed not just how Ken operates his business, but has changed his purchasing methods as well, particularly when it comes to his A-double combinations.

Previously the procedure was to buy a truck, put a body on it and add a new dog trailer and later replace the truck and keep the trailer.
“But that doesn’t look right with the nice shiny body on the truck and a tired looking trailer, whereas with an A-double we can just replace the prime mover,” says Ken.

It’s not just about aesthetics, although Ken and his team take serious pride in the appearance of the fleet.

Ken has been a perennial early adopter of technology and examines opportunities to improve operations within the industry with some inspired lateral thinking.

Back in the days of cap tarps on tippers, Ken fitted his with stretch rubber rings to make the tarping easier for the drivers. He was one of the first to fit wind back tarps, initially using manual activation and progressing to electric operation.

Ken was also an early pioneer of disc brakes on trailers. Working closely with BPW Transpec, he even had EBS on a four-axle trailer with load sensing on the truck as far back as 2003. The ultimate solution after a couple of years of experimentation was to move to bigger 470mm diameter rotors rather than the original 370mm units.
Fitting cameras to trucks to increase drivers’ all round vision is not new, and Ken now installs the latest in multi-camera technology including hard drives with 2TB capacity to provide the capability to record up to four months of vision data.

When the left turn indicator is activated the display screen in the cab switches from a multi-screen view to display the largest possible image of the ‘blind spot’ on the truck’s kerb side. The current system costs around $5,500 per truck but Ken and his drivers regard them as good investments.

Images from the cameras are transmitted to the office and can be viewed live if necessary.

“From the various cameras we can see very clearly where the truck is situated within its lane, and with the saved data no one can come back in a few months’ time and claim a driver failed to change lanes safely,” says Ken. “The drivers have a screen in the truck so they can see what I can see, other than from the forward-facing camera because they already have the same view out of the windscreen.”

Typical of Ken’s approach to safety is the fitment of front mounted mirrors.

“They were mandatory on a couple of jobs and while they might be ugly they provide a fantastic view. I’ve since put them on every single truck,” he explains.

Ken closely examined the PBS scheme for two years when it was first advocated and his decision to take it up was based predominantly on number crunching.
“Before I do anything I always sit down and work the numbers and make sure I can afford it before I even approach finance providers,” he says.

“I do that because I don’t believe in wasting other people’s time and I have to be confident that it is going to work from my side.”

Since the advent of PBS, KIM Haulage has used Sloanebuilt Trailers and bodies. In all probability Ken had the first five-axle dog trailer in Sydney and also the first A-double combination.

“At the time there was big news about a tri-drive truck and five-axle dog at just over 47 tonnes, yet two weeks later I had the first A-double on the road at 51.5 tonnes,” Ken recalls.

“Sloanebuilt have always worked well with me and are definitely well-advanced in the area of PBS. The industry take-up of PBS early in the piece wasn’t very good and since then there has has been a lot of adaptation. For us, everything purchased since 2011 has been aimed at PBS applications.”

All trucks and trailers in the KIM fleet are equipped with alarms for the PTO and the hoists.

“I saw an over-height truck hit a tunnel and thought ‘this can’t happen to me because my trucks are only 3.5 metres high’. Then I saw a raised tipper hit one and thought: ‘how do I make sure that that doesn’t happen?’ I spoke to Sloanebuilt about putting the alarms on. I also went to Mack and got them to speed limit the trucks to 20 km/h when the PTO engaged. After all of that if they do hit something it will only be at 20 km/h.”

“How do I know tailgate is securely locked?” Ken asked himself. “It was OK in the old days with manual tailgates because we could see the handles. But modern tippers have air operated tailgate locks. Electric warnings are not the answer because if it doesn’t work for some reason the driver isn’t aware of the problem.”

The unsophisticated yet effective solution has been to have Sloanebuilt fit a small indicator arm which the drivers can easily see in their mirrors.

Trailer safety chains of the highest specification are utilised and Ken has developed a clever access panel to protect the electrical, air and hydraulic fittings in the area of the trailer connections.

Horizontal surfaces on truck and trailer bodies are kept to a minimum to avoid any build-up of material such as dirt and rocks that can eventually fall off and create a hazard for other drivers.

Ken currently runs two A-doubles. These have been set up to achieve maximum flexibility within the fleet.

“I use the two 685hp Mack SuperLiner prime movers with short bogie trailers and some dog trailers as I run on everything else so I can put any one of my fleet dogs back there,” he says. “If a prime mover is off the road, for any reason, it’s a simple as hiring another prime mover equipped with hydraulics.”

Not that Kim Haulage has many breakdowns. Engine oil services on the Macks are performed at 33,000 km intervals with a C-service every third service.

Ken acknowledges that this could probably be extended but draws confidence in making it very straight forward to remember when a service is due and ensure that everything is completed correctly. Oil sampling and testing is carried out as part of every service.

KIM Haulage has two truck mechanics who mostly work nights when the trucks are off the road and are supported by a service vehicle equipped with an electro-hydraulic crane and a full complement of tools and spares.

Wheel nut indicators are employed and in addition there is a system whereby, if a mechanic has a wheel off for any reason, he places a notice in the cab indicating to the driver the affected wheels, so the driver knows to recheck the tension the next day.

A drawbar crack test is carried out every month on every trailer. Anderson plugs are installed on every truck to make jump starting safe and easy should a flat battery situation be encountered.

Ken is a strong advocate of central tyre inflation systems and has been specifying the Vigia system for all new trailers as it keeps all tyres at the same pressure.

Although the puncture rate remains relatively unchanged, by keeping tyres inflated at even pressures the incidence of blow outs, should there be a leak, has been significantly reduced.

Ken is dedicated to the Mack mDrive and Volvo I-Shift automated manual transmissions.

“The only vehicles I have with clutch pedals other than my own cars is a couple of HiLux work utes,” he admits.

Each Mack has been configured so when stopped and the ‘M’ button on the transmission control panel is pushed it selects first gear.

The reason for this typical procedure is to tip the trailer first, then the truck body. Between those two actions the transmission may think the entire combination is empty so automatically engages second or third gear when all the driver wants to do is creep forward between drops.

“If it was a manual the driver would select first, so the mDrive does the same, making it easier on the driver and the driveline,” Ken says.

Pacific County urges owners of second homes to stay away