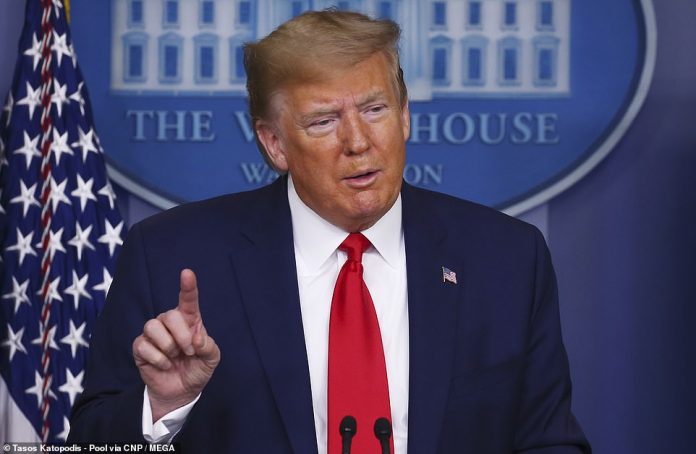 President Donald Trump has bashed governors who he says have taken shutdown orders too far in the coronavirus pandemic, saying ‘some of them are being unreasonable’ as protests against the lockdowns spread across the nation.

‘There are a lot of protests out there, and I just think that some of the governors have gotten carried away,’ Trump said at a White House briefing on Saturday, as protests grew in cities across the country.

On Saturday, thousands of protesters gathered in the state capitals of Texas, Indiana, New Hampshire, Maryland and elsewhere, demanding relaxation of the stay-at-home orders which have left millions jobless. Other protests in dozens of states are already being planned in the coming weeks.

Several hundred people rallied in Texas’ capital of Austin on Saturday, chanting ‘Let us work!’ Many clamored for an immediate lifting of restrictions in a state where more than 1 million have filed for unemployment since the crisis began.

The rally was organized by a host of Infowars, owned by conspiracy theorist Alex Jones, who joined protesters on the Capitol steps after rolling up in a tank-like truck.

Texas Governor Greg Abbott, a Republican, has said that non-essential business that can operate curb-side service will be allowed to re-open on Friday — but the protesters are demanding faster and broader action.

President Donald Trump has bashed governors who he says have taken shutdown orders too far in the coronavirus pandemic, saying ‘some of them are being unreasonable’ 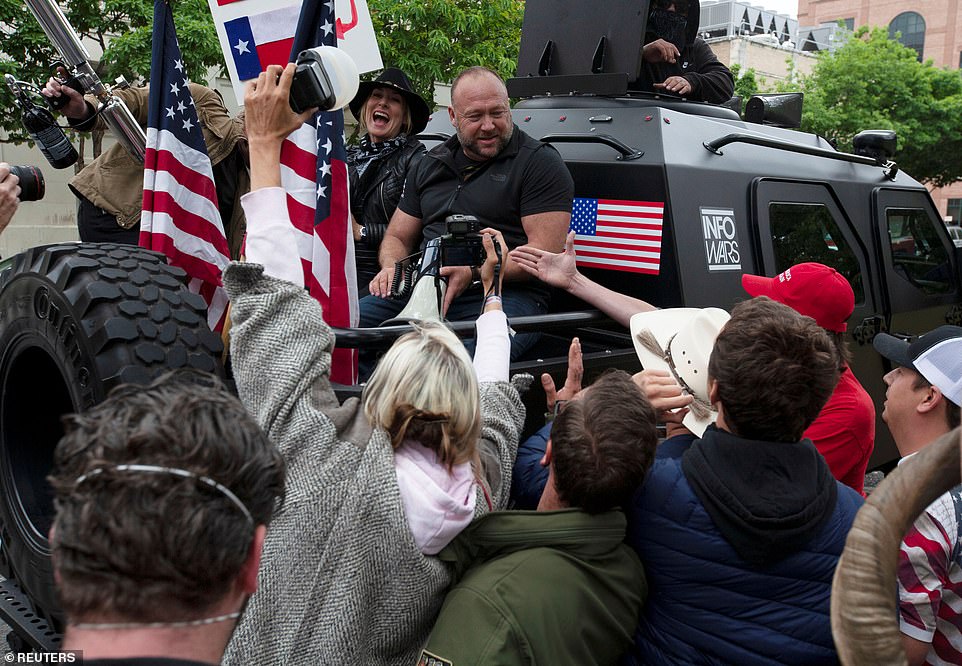 Fringe radio host Alex Jones, founder of the Infowars site, rolled up at the Austin protest in a tank-like truck on Saturday 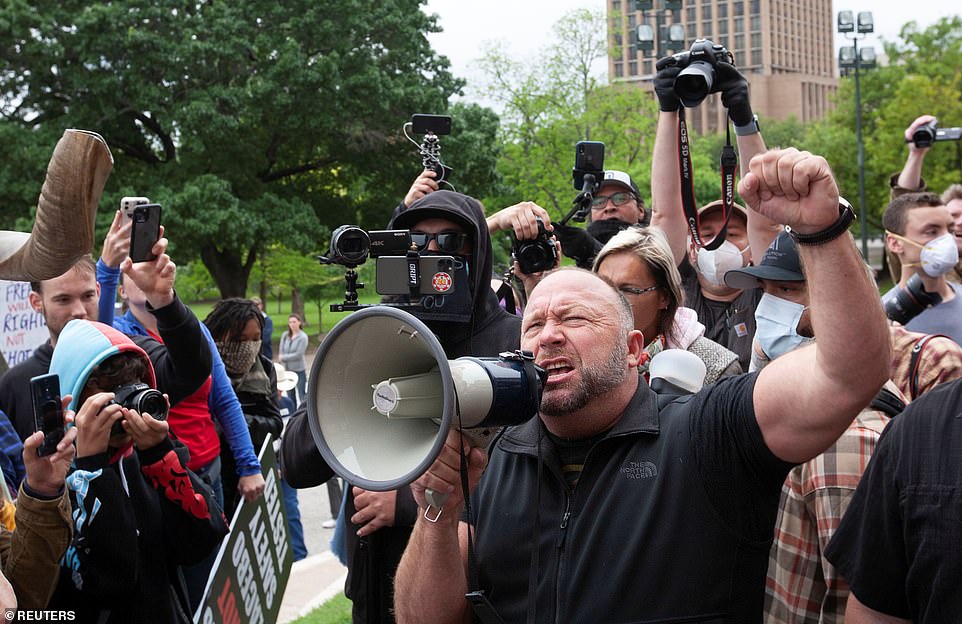 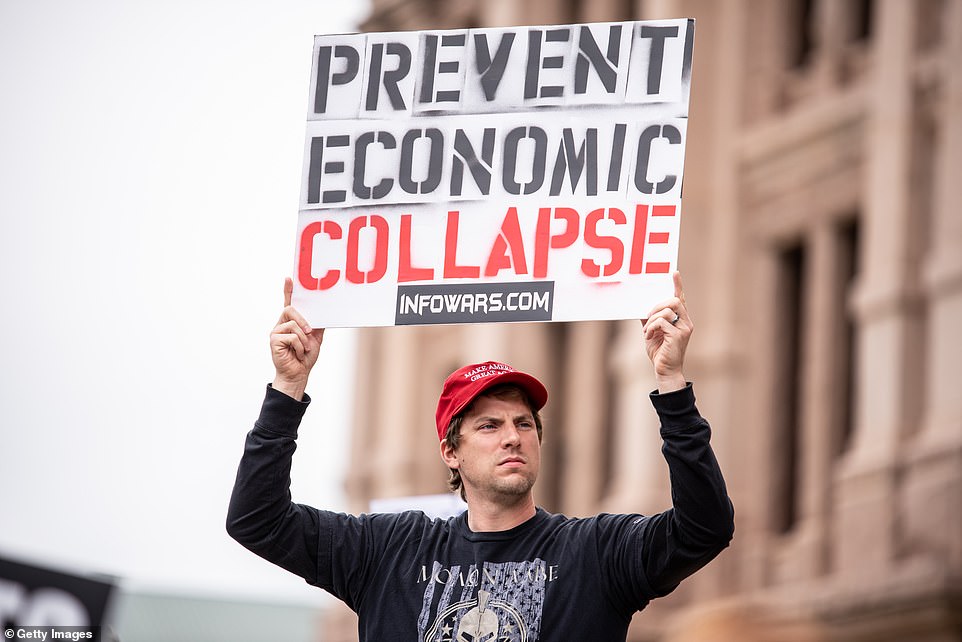 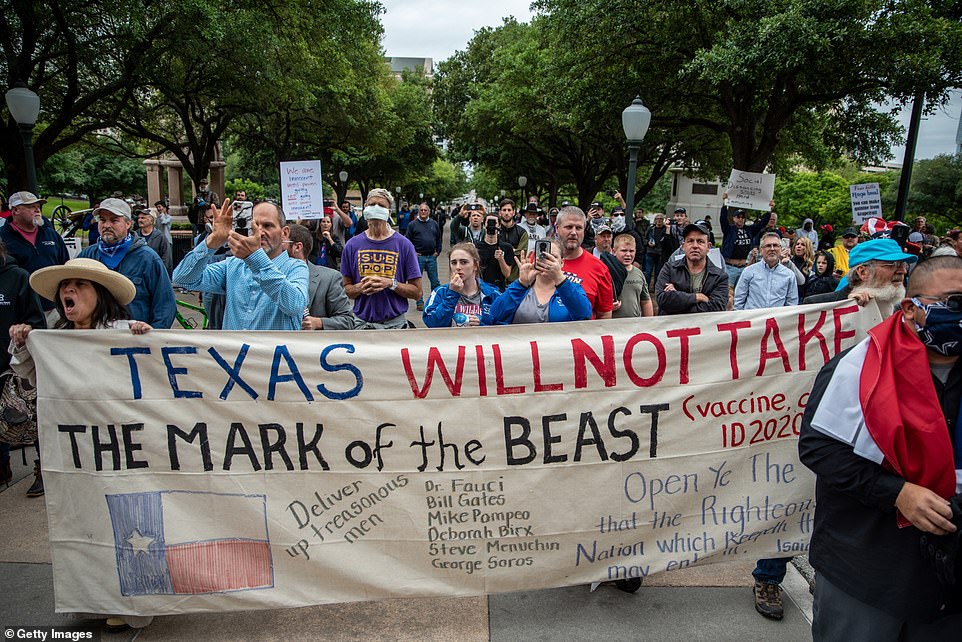 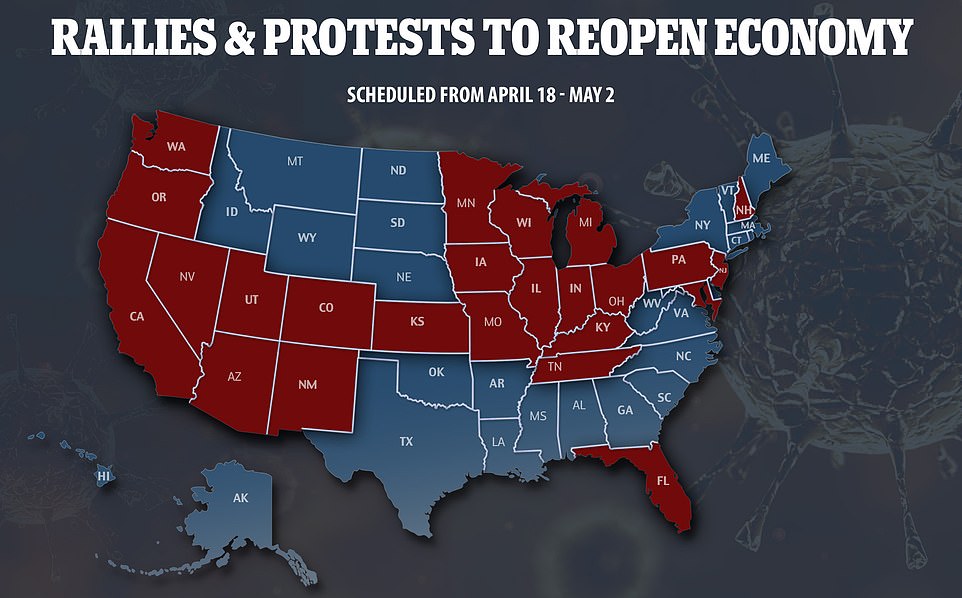 ‘It’s time to reopen Texas, it’s time to let people work, it’s time for them to let voluntary interaction and good sense rule the day, not government force,’ said Justin Greiss, an activist with Young Americans for Liberty, at the Austin protest.

Added stay-at-home mother Amira Abuzeid: ‘I’m not a doctor but I’m an intelligent person who can do math and it looks like at the end of the day, these numbers are not that worrisome.’

In a string of tweets on Saturday, Trump ripped Democrats, accusing them of trying to score political points rather than try to solve the crisis.

‘No matter what you do for the Do Nothing Democrats, no matter how GREAT a job you are doing, they will only respond to their Fake partners in the Lamestream Media in the negative, even in a time of crisis,’ Trump fumed, recalling what he said was an unpleasant phone conference between Senate Democrats and Vice President Mike Pence on Friday.

‘They were RUDE and NASTY,’ Trump said. ‘This is their political playbook, and they will use it right up to the election on November 3rd. They will not change because they feel that this is the only way they can win.’

Other protests took place across the country on Saturday. In Indianapolis, more than 200 people stood close together outside the governor’s mansion, carrying American flags and signs demanding that Governor Eric Holcomb, a Republican, lift restrictions.

‘Our goal is to lift up our voices so that the governor will lift his unconstitutional restrictions because his cure is worse than the disease,’ organizers of the Indiana protest said in a statement. ‘The government cure has done more harm than the disease!’

Indiana’s state health department reported 529 new coronavirus cases between April 7 and midday Friday, raising the total to more than 10,600. The number of deaths rose by 26, to 545. 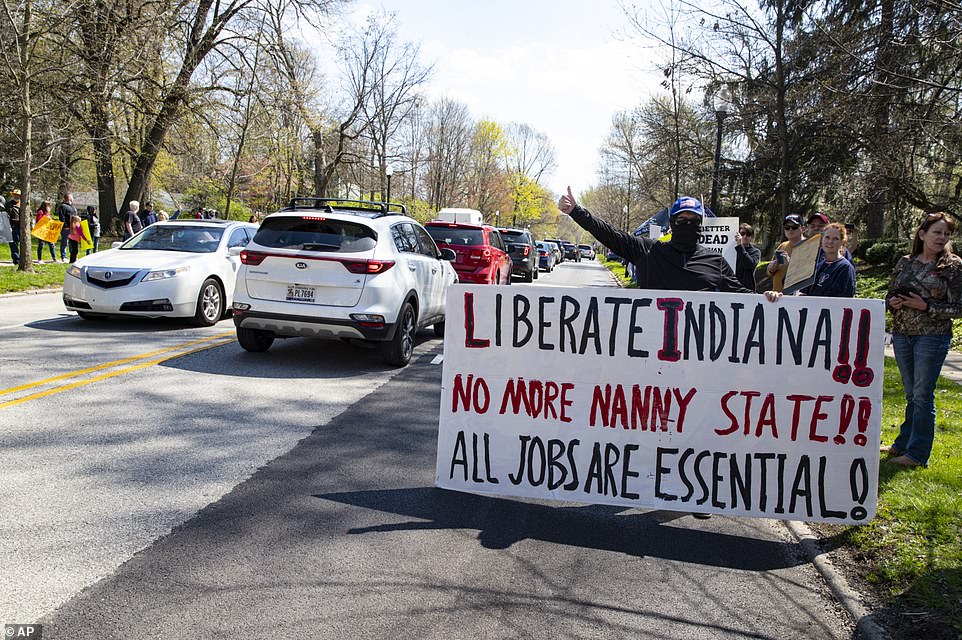 Protesters gather outside the Indiana Governor’s mansion in Indianapolis, Saturday, urging Gov. Eric Holcomb to back off restrictions on Indiana residents because of the coronavirus, and restart the economy 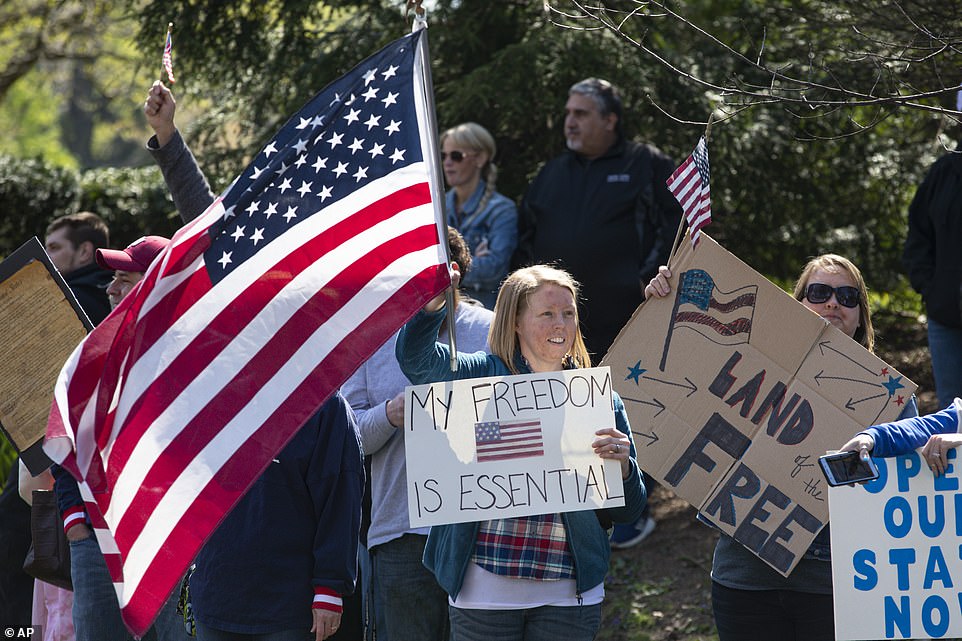 ‘Our goal is to lift up our voices so that the governor will lift his unconstitutional restrictions because his cure is worse than the disease,’ organizers of the Indiana protest said in a statement 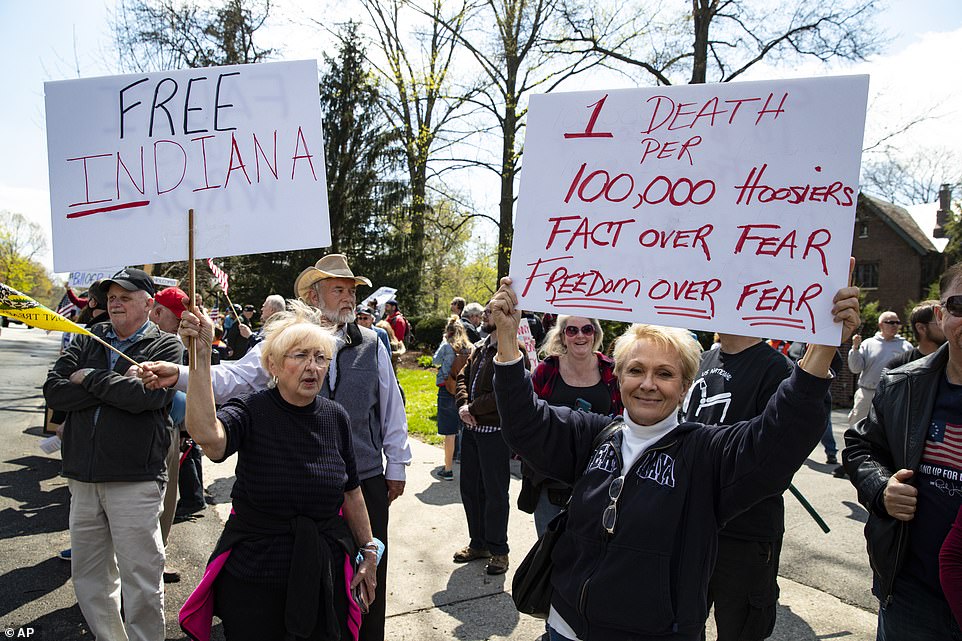 In Indianapolis, more than 200 people stood close together outside the governor’s mansion, carrying American flags and signs demanding that Governor Eric Holcomb, a Republican, lift restrictions 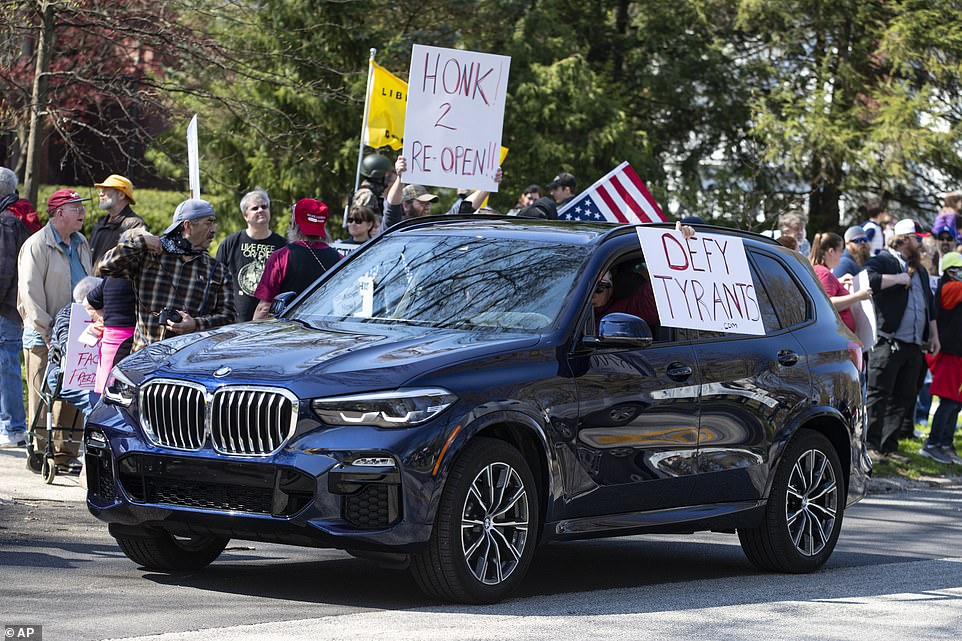 Indiana’s state health department reported 529 new coronavirus cases between April 7 and midday Friday, raising the total to more than 10,600. The number of deaths rose by 26, to 545

Demonstrators outside Maryland’s colonial-era statehouse in Annapolis stayed in their cars but waved signs with messages like ‘Poverty kills too.’

Dolores, a hairdresser in Maryland, said she is not eligible for unemployment because she is a business owner, not an employee.

‘I need to save my business. I need to work to live. Otherwise I will die,’ she said. 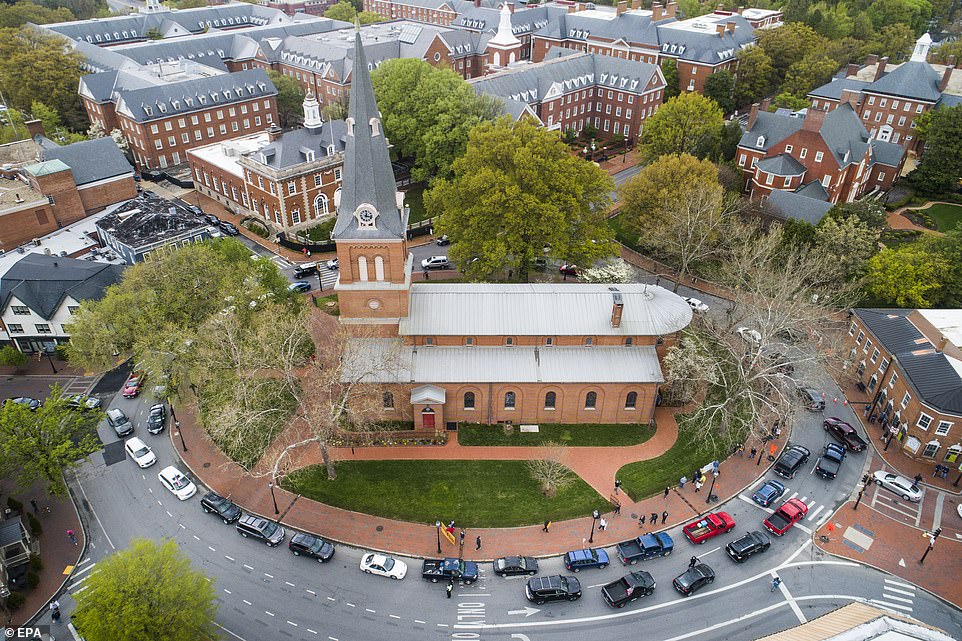 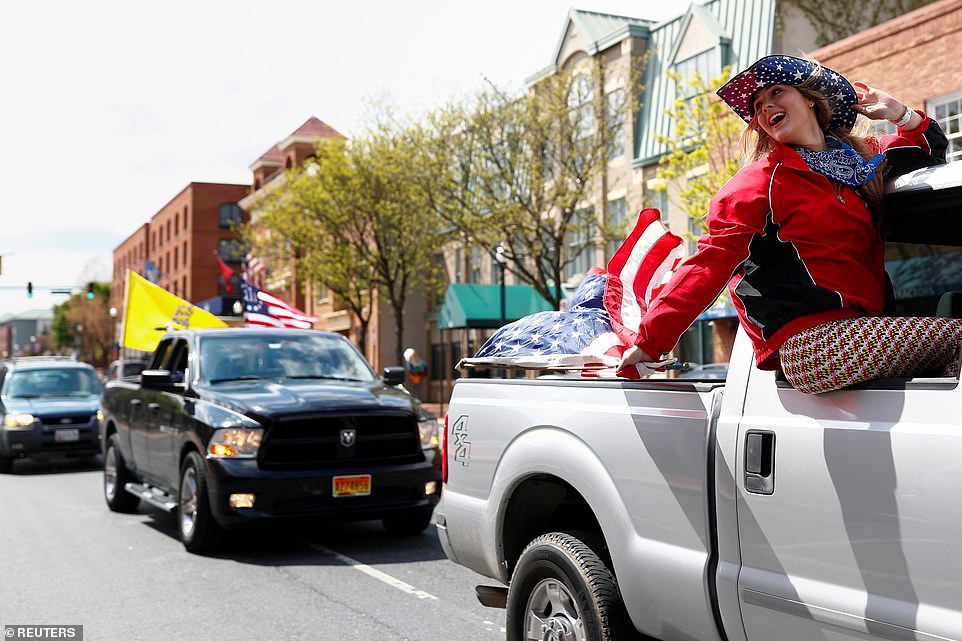 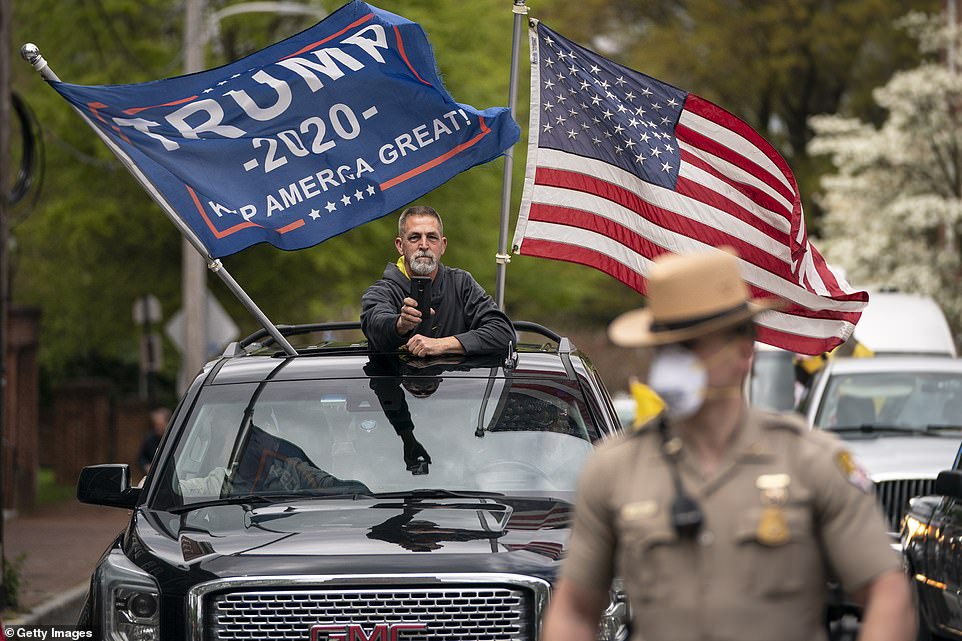 Protesters with the group Reopen Maryland rally near the State House to call on the state to lift the stay-at-home order and reopen the economy on Saturday in Annapolis, Maryland 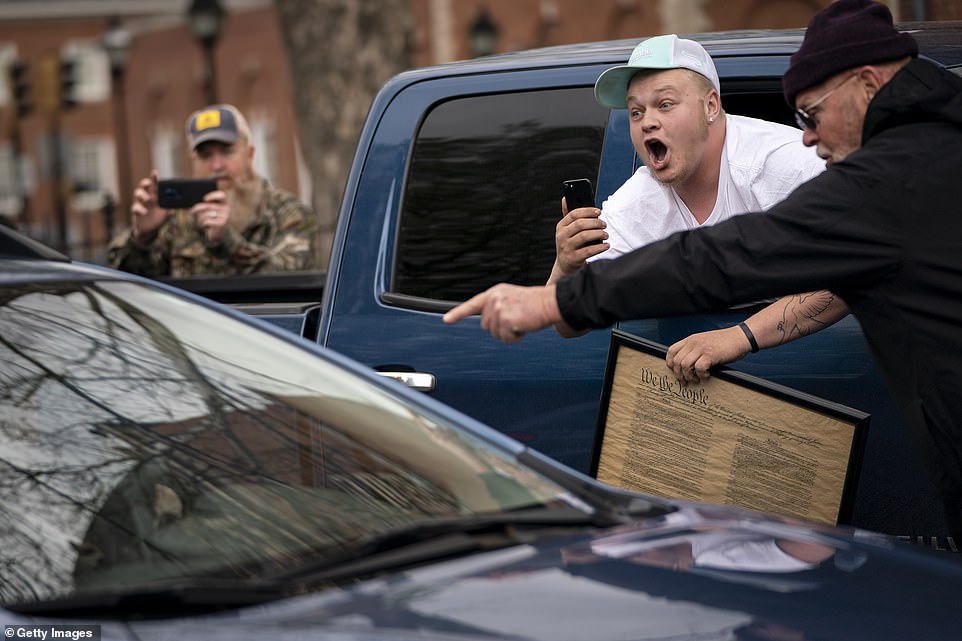 Protesters, one holding a framed copy of the Constitution, argue with another motorist while demonstrating near the State House to call on the state to life the stay-at-home order and reopen the economy on Saturday in Annapolis, Maryland

And in Concord, New Hampshire, roughly 400 people gathered in the cold rain to send a message that extended quarantines were not necessary.

‘Even if the virus were 10 times as dangerous as it is, I still wouldn´t stay inside my home. I´d rather take the risk and be a free person,’ said one of the New Hampshire protesters, talk show host Ian Freeman. 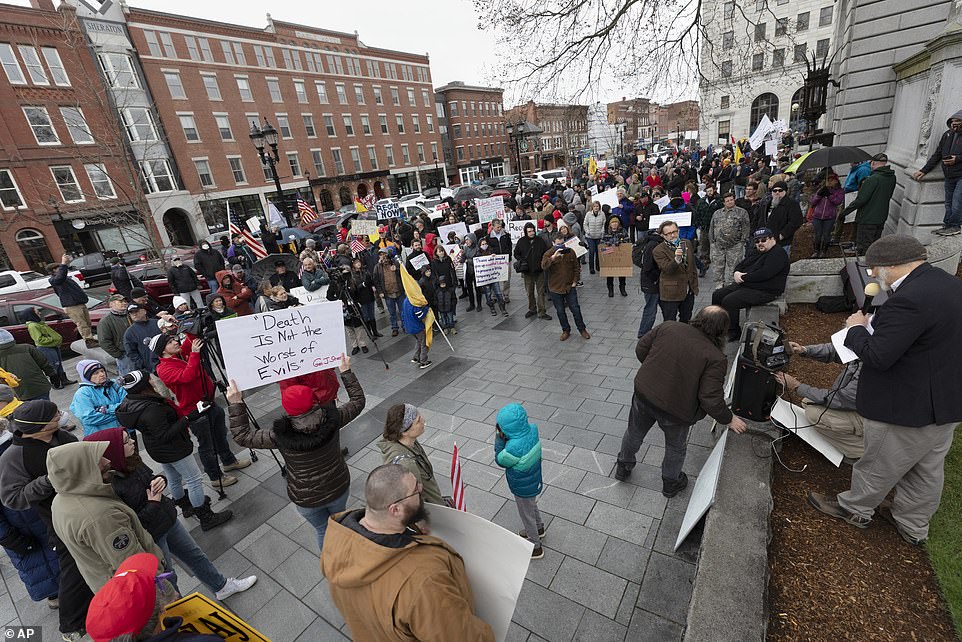 In Concord, New Hampshire, people attend a demonstration against the government mandated lockdown on Saturday 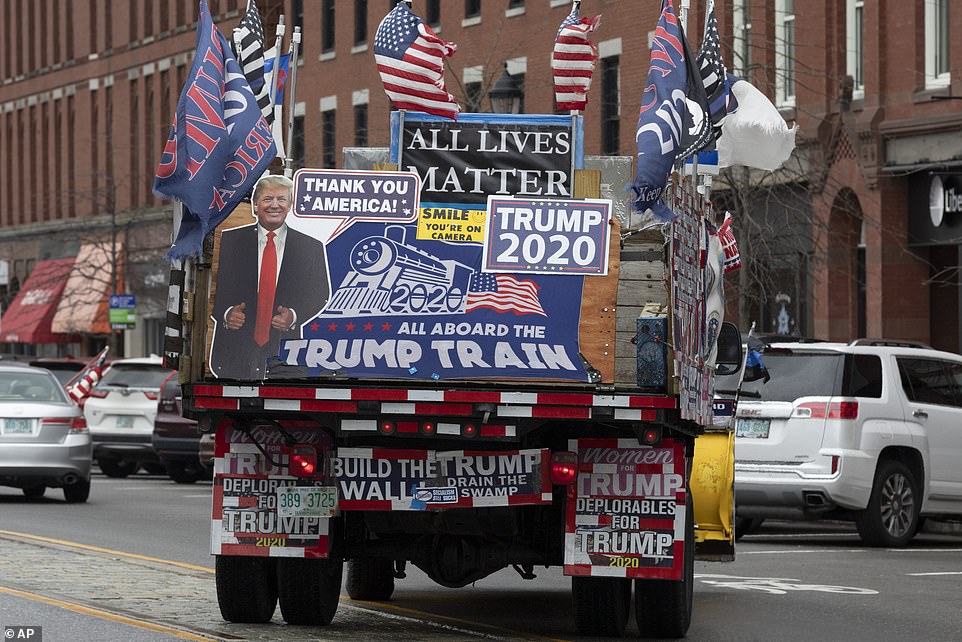 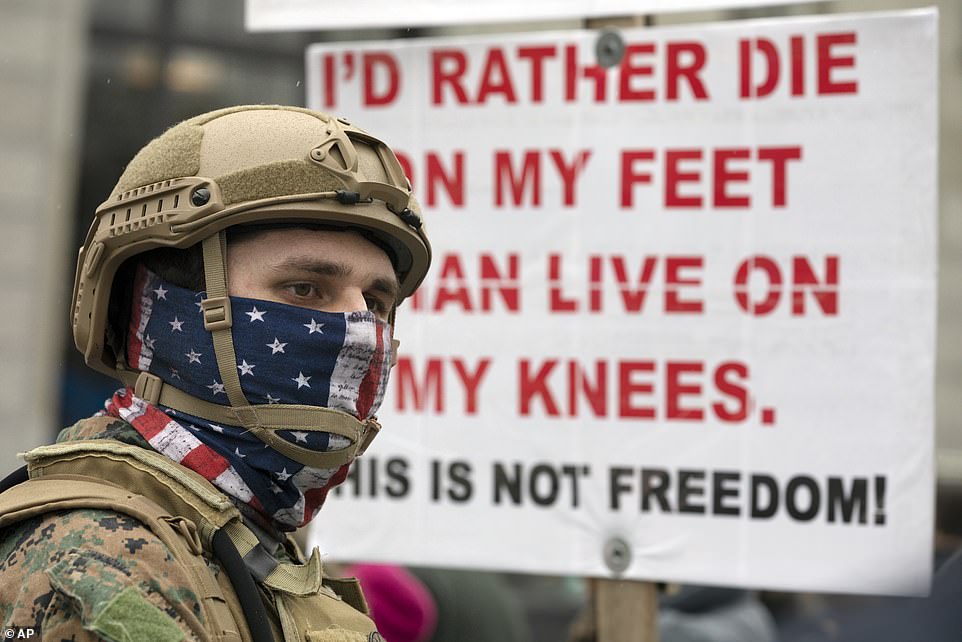 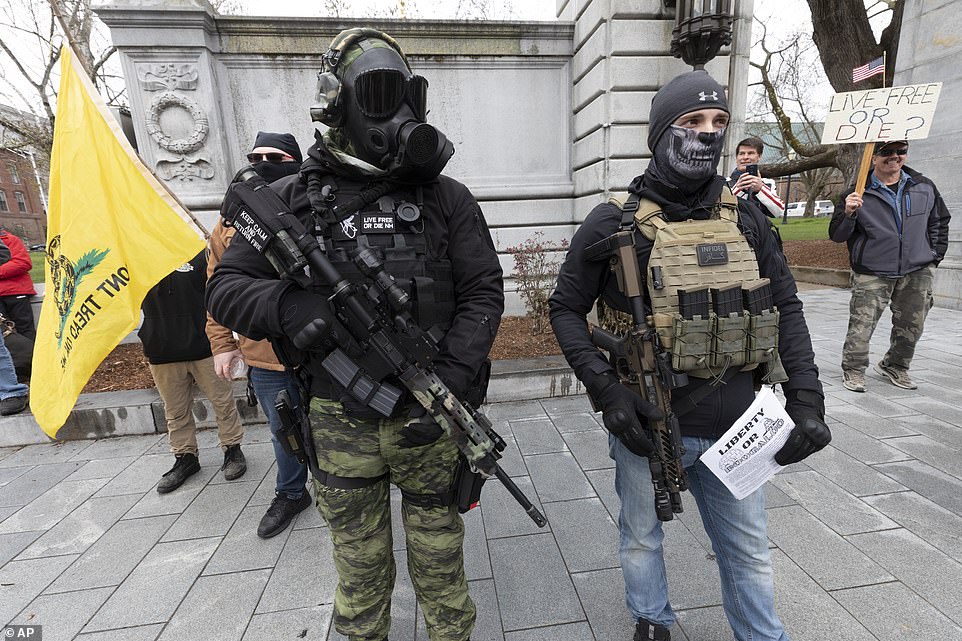 Members of the Boogaloo Movement, attend a demonstration against the lockdown Saturday in New Hampshire

At his Saturday briefing, Trump singled out Michigan Governor Gretchen Whitmer, a Democrat, saying ‘she has things, ‘don’t buy paint, don’t buy roses’ — I mean she’s got all of these crazy things.’

‘Somebody sitting in their boat on a lake should be ok. They shouldn’t arrest people,’ Trump added, referring to Michigan’s stay-at-home order which prohibits jet skis, motorboats or other comparable watercraft but allows for canoes, sailboats and kayaks.

In a tweet, Whitmer fired back, saying: ‘Right now, despite having the 10th largest population, we have the 3rd highest COVID-19 deaths in the nation. I’m using every tool at my disposal to save lives, and it’s working. The curve is flattening.’

‘Remember: COVID-19 is the enemy, not each other,’ she added. 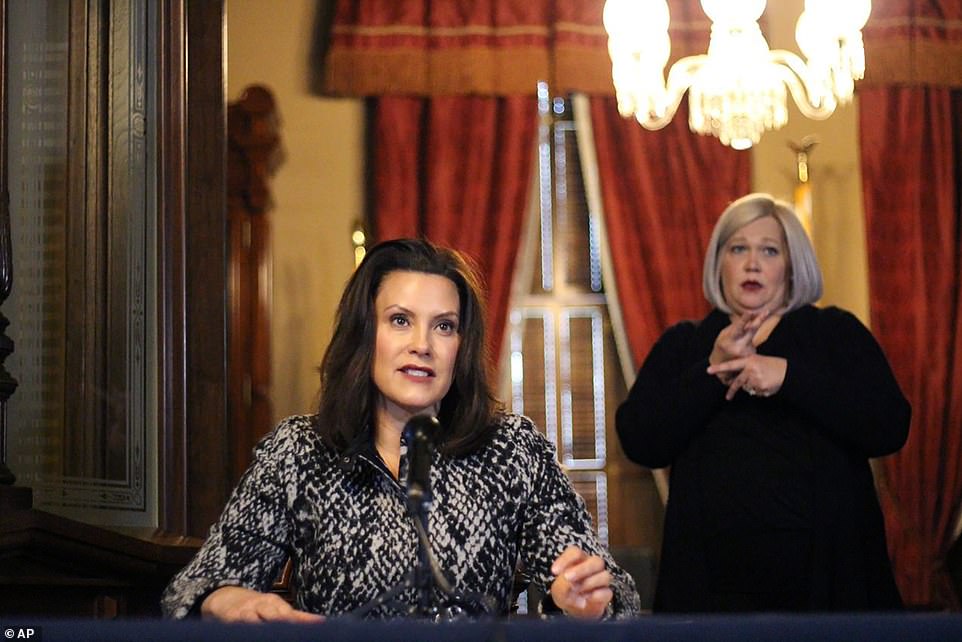 Michigan Governor Gretchen Whitmer fired back, saying: ‘Right now, despite having the 10th largest population, we have the 3rd highest COVID-19 deaths in the nation. I’m using every tool at my disposal to save lives, and it’s working.’

Trump also talked at length about testing capacity, saying that the U.S. has ‘tremendous testing capacity’ after governors argued that relaxing social restrictions would be disastrous until testing is much more widely available.

Trump said that more than four million tests had been conducted nationwide, which is the equivalent of about 1.2 percent of the U.S. population.

The president claimed that the country has ‘tremendous unused capability’ and that many states are not using testing kits properly, utilizing only a fraction of the capacity of high-throughput tests.

‘Unfortunately some partisan voices are attempting to politicize the issue of testing which they shouldn’t be doing,’ he said.

‘This was a military and private enterprises march. We marched and unfortunately they’re viewing it as an election,’ Trump added. ‘This should not be a partisan witch-hunt like the Russia witch-hunt.’ 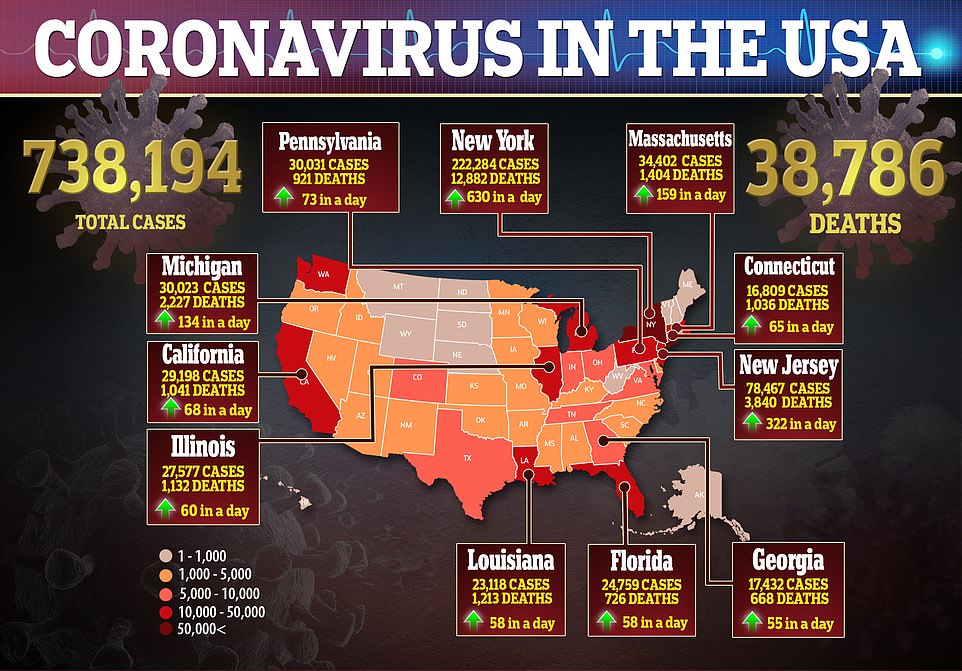 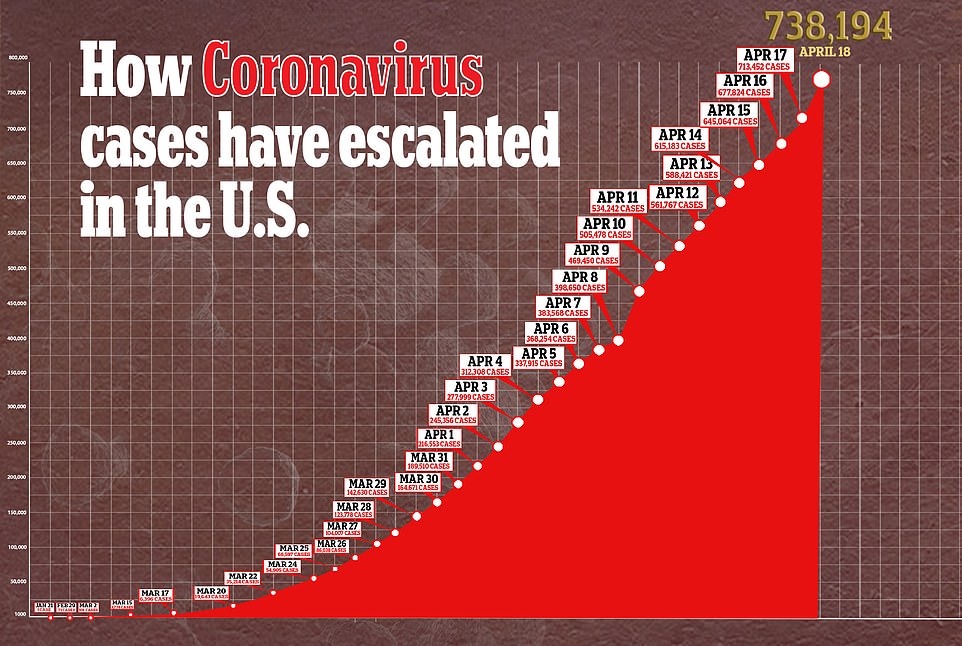 Trump said that some states had requested massive numbers of ventilators that they had never ended up needing. He also pointed out that the military had built thousands of field hospital beds in New York City that are now going mostly unused.

Across the country, protests have been mounting calling on governors to relax shutdown orders and allow people to go back to work.

Trump said that Texas and Vermont will allow certain businesses to reopen on Monday while still observing coronavirus-related precautions and Montana will begin lifting restrictions on Friday.

‘We continue to see a number of positive signs that the virus has passed its peak,’ Trump told reporters at the briefing.

Some state governors have warned that they will not act prematurely to reopen their economies until there is more testing for the virus, however.

Business leaders have also told Trump the country needs to have widespread testing in place before their companies can return to normal operations. 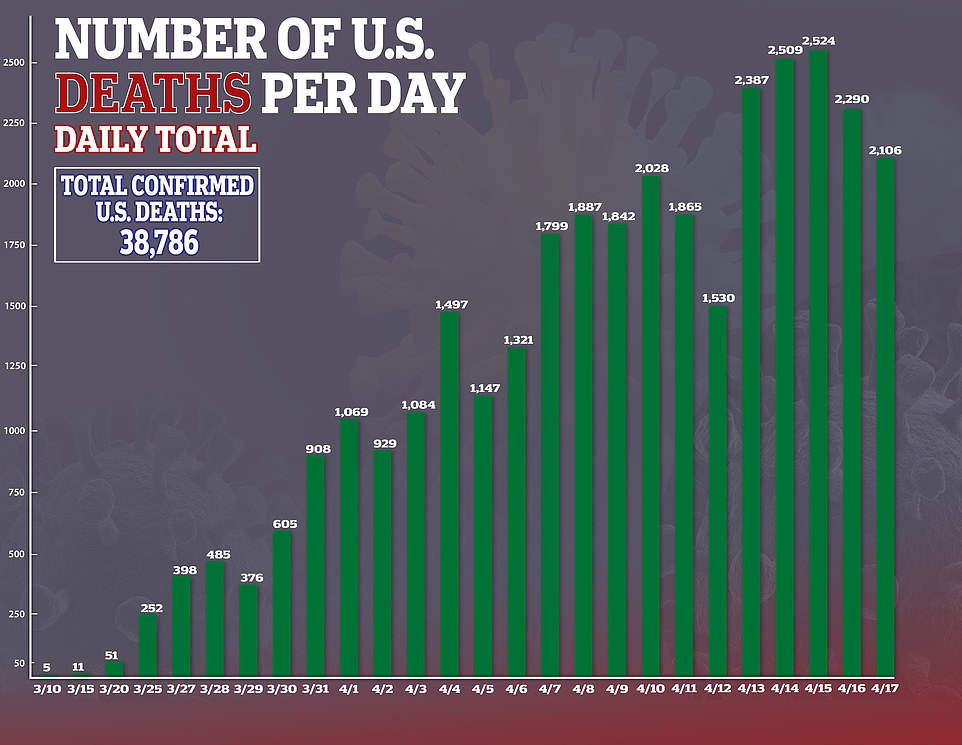 On Saturday, Trump said ‘our testing is getting better and better,’ but offered no concrete evidence.

He said both Republican and Democratic governors ‘have announced concrete steps to begin a safe and gradual phased opening.’

Texas and Vermont ‘will allow certain business to open on Monday while still requiring appropriate social distancing precautions,’ he said.

On Saturday morning, Governor Andrew Cuomo of New York, epicenter of the U.S. epidemic, said his coronavirus-battered state may finally be past the worst of the health crisis there.

Trump is pushing to relax the U.S. lockdown by May 1, a plan that hinges partly on more testing.

Public health officials said the ability to test enough people and trace contacts of the infected is crucial before easing restrictions, and that infections could surge anew unless people continue to take precautions.

Vice President Mike Pence delivered a commencement address at the U.S. Air Force Academy in Colorado, a trip aimed at showing the country is on course to gradually reopen.

Amazoox, TuSimple seeks $250M and the next e-scooter battleground – TechCrunch

L.A. County officials plead for street vendors to shut down during...