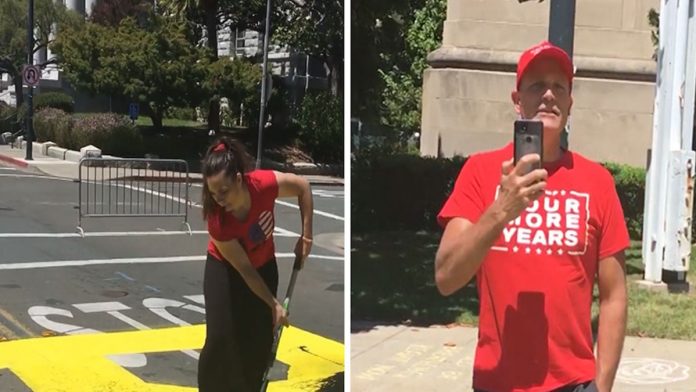 A pair of Trump supporters quickly ruined the work of residents in a Bay Area town that got the OK to paint a Black Lives Matter mural — and now, cops would like a word.

This went down Saturday in the city of Martinez, CA — where a large mural reading “BLM” was stenciled and filled in with paint by the people there in front of their local courthouse — something city officials approved and even advertised as a community-led holiday event.

The painting of the mural was scheduled from 9 AM to 3 PM, but not too long after folks there finished up the job … these two boneheads rolled up and did a paint job of their own.

Karen and Chad were so offended by the BLM street mural outside of the courthouse in Martinez, California, that they spent their 4th of July painting over it!! The mural was just completed a few hours before this. 😳😱🤯 pic.twitter.com/Lc1lQLnkGp

The woman here — who appeared to be rocking a MAGA-themed shirt — started applying black paint over the letters with a roller … she began with the B and then moved on to the L in a sloppy rush — as people around them started to film and get in their face about it.

She had a man with her who was definitely wearing Trump 2020 gear — and he was standing by and filming the encounter himself, getting into shouting matches with bystanders and telling them they were brainwashed, and that racism was a liberal hoax. Seriously …

The witnesses got footage of their truck as well as their license plate. Eventually, the couple scrammed before they could finish their defacement … things were getting heated.

Now, Martinez Police says they’re looking for these two and plan to arrest them for defacing the mural … which, again, was a city-sanctioned thing. Sounds like they might be facing a simple vandalism charge — the cops were hesitant to call this a hate crime quite yet.

And, of course, Twitter was quick to label them the newest “Karen” and “Kevin” — but we’ll just resort to calling them Tweedle Dee and Tweedle Dumbass. Probably more accurate.