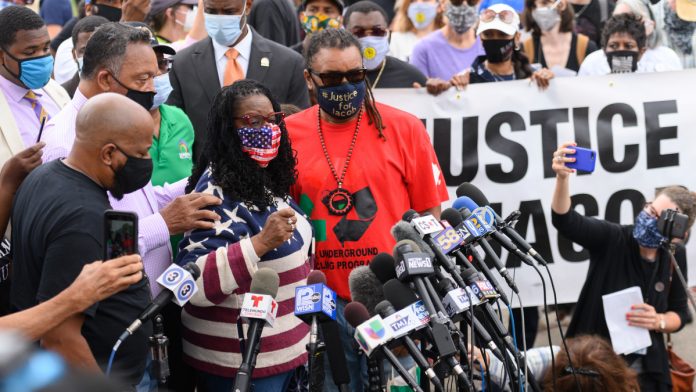 Note: Press conferences and live video will be available in the player above as they occur.

President Donald Trump visited Kenosha, Wisconsin, on Tuesday after more than a week of unrest following the police shooting of 29-year-old Jacob Blake.

During his visit, Blake’s family held a block party at the site where he was shot late last month, calling for peace, justice, healing for the community an end to systemic racism.

Trump’s arrival was met with protests and demonstrations in the city center, with members of the crowd – both supporters and opponents of Trump – engaging each other in shouting matches at times.

Here are the latest updates on the situation unfolding in Kenosha:

Protesters Gather, March in Kenosha During and After Trump’s Visit

Demonstrators in Kenosha were marching through city streets, after President Donald Trump wrapped up a visit to the area.

More than 100 people were seen following a man with a megaphone, shouting, “arrest the police” and other chants.

The city saw protest and some violence after the Aug. 23 police shooting of Jacob Blake. The 29-year-old Black man was shot seven times in the back. His family says he is paralyzed.

At one point, a group of protesters surrounded a man who they said was a member of a white nationalist group. Police officers moved in quickly and pulled the man away from the group. One officer pepper sprayed a woman.

Earlier in the day, a few hundred supporters and detractors of Trump gathered at a city center intersection in Kenosha, mixing and engaging each other in shouting matches at times, but there were no reports of violence.

Tensions temporarily rose as Trump’s motorcade rolled by, with his supporters clapping and others booing and cursing. But crowd sizes were modest and passions were mostly tempered.

At least two people were carrying pistols in holsters, telling those around them they were Trump supporters and had open-carry permits.

By mid-afternoon much of the crowd dispersed. A few motorcyclists remained, with flags supporting Trump, and a booth nearby sold T-shirts supporting the Black Lives Matter movement.

President Donald Trump on Tuesday met with Kenosha law enforcement, business owners and area leaders to discuss the response to unrest in the area following the police shooting of Jacob Blake.

On the same street where he was shot by police nine days earlier, the family of Jacob Blake held a block party on Tuesday to counter the president’s visit to Kenosha.

During the event, Blake’s family members encouraged supporters to stand in solidarity with them in their fight for justice.

“Peace and love to him because he has his agenda and we have ours,” said Justin Blake, Jacob’s uncle.

“Whatever his motivation is, we’re not engaging with that. We’re asking everybody here to focus on getting justice for little Jake.”

Family and local leaders speak out at a community event in Kenosha demanding justice for Jacob Blake in the same spot he was shot at by police last month.

Justin Blake says his nephew’s condition is improving, but he is still paralyzed from the waist down. Meanwhile, he says, Jacob’s children are receiving therapy after witnessing the August 23rd shooting of their father from the backseat of his car.

State leaders and other prominent figures joined in the day of action, including Reverend Jesse Jackson and Wisconsin Representative Gwen Moore.

“If the president of the United States loves chaos, we are not going to create the backdrop for the violent chaos he wants to see,” said Rep. Moore.

Trump did not meet with the Blake family during his visit. Justin Blake says they did not speak with him at all.

“Whatever they are talking about is a ruse. That’s why we’re doing what we are doing today, so they can’t take over the narrative,” said Blake.

Blake encouraged continued peace in Kenosha but also issued a call to action.

“We’re asking people not to be violent, not to destroy our community, but in the same breath we’re asking them to stand with the Blake family,” he said.

At Tuesday’s community event, there were free haircuts, coronavirus tests, food and music. People were also encouraged to register to vote.

“We’re here today not only healing our family, the Blake family, but this is our family. Kenosha is our family now. We want to help them heal as well,” said Justin Blake.

When asked if the Blake family would meet with presidential candidate Joe Biden, Justin Blake said his nephew has already spoken with him and his running mate Kamala Harris by phone.

Blake says the family will remain in the Kenosha area until there is an indictment of the officer involved.

President Donald Trump on Monday declined to condemn an Illinois teen who police say shot and killed two protesters in Kenosha, Wisconsin, last week, just minutes after he derided “left-wing political violence” as “terrible” and “out of control.”

In a news conference at the White House Monday afternoon, a reporter asked Trump if he would “condemn the actions of vigilantes like Kyle Rittenhouse.”

Rittenhouse is the 17-year-old from Antioch, Illinois, who was arrested Wednesday and charged with multiple felonies, including first-degree intentional homicide, after police say he shot three people, two fatally, as chaos unfolded in Kenosha the night before.

“We’re looking at all of it,” Trump said Monday. “And that was an interesting situation. You saw the same tape as I saw. And he was trying to get away from them, I guess; it looks like. And he fell, and then they very violently attacked him. And it was something that we’re looking at right now and it’s under investigation. But I guess he was in very big trouble. He would have been — I — he probably would have been killed.”

Damage to city-owned property from violence that erupted over the police shooting of Jacob Blake in Kenosha is estimated at nearly $2 million so far, a city official said.

The city’s public works director, Shelly Billingsley, provided the estimate to local leaders Monday night on what it would cost to replace garbage trucks, street lights and traffic signals, among other things that were destroyed or damaged in the unrest over the last week.

The estimate was made as some Kenosha residents fear Tuesday’s planned visit by President Donald Trump may stir more emotions and cause more violence and destruction in the southeastern Wisconsin city after several days of peace. Others, however, welcomed the president’s trip.

The president, who has been an outspoken critic of the handling of similar unrest in Portland, conceded that he was aware that Evers “did not want us there,” but said that he hoped his presence would help to inspire residents.

“It could also increase enthusiasm,” Trump said. “It could increase love and respect for our country. That’s why I am going.”

President Donald Trump says he will still visit Kenosha, Wisc., despite a request from Wisconsin Gov. Tony Evers to postpone.

At a White House press briefing Monday evening, Trump gave the governor credit for accepting assistance from the National Guard, which he claimed help quell tensions in the city.

“Ultimately he said yes. As soon as he said yes, the problem ended,” Trump said. “But I have to see the people that did such a good job for me…We have tremendous support in the state of Wisconsin.”

Despite visiting Kenosha on Tuesday, President Trump didn’t meet with the family of Jacob Blake, a Black man who was shot seven times in the back by a police officer.

Protesters have marched in Kenosha every night since Blake’s shooting on Aug. 23, with some protests devolving into unrest that damaged buildings and vehicles. Blake, 29, was paralyzed as a result of the shooting, according to family members.

When asked why he won’t meet with the Blake family, Trump told reporters he decided not to take part, because the family wanted lawyers present.

Officials in Kenosha announced that the city’s curfew will remain in effect through at least Labor Day amid continuing unrest after the police shooting of Jacob Blake earlier this month.

The news comes as protests and unrest continue in the city after Blake’s shooting. While things have remained largely peaceful in recent days, last week saw a fatal shooting in the city, along with property damage and fires, according to officials.

Timeline: The Jacob Blake Shooting and the Unrest That Followed

At 5:11 p.m. on Aug. 23, Kenosha police officers were called to a scene that would ultimately end with officers shooting a Black man, Jacob Blake, in the back at least seven times.

In the hours and days following, protests erupted and the small Wisconsin city became the center of nationwide outrage, the latest focal point in what has been summer of unrest amid cries for racial justice.

Here’s a look back at what happened and when: