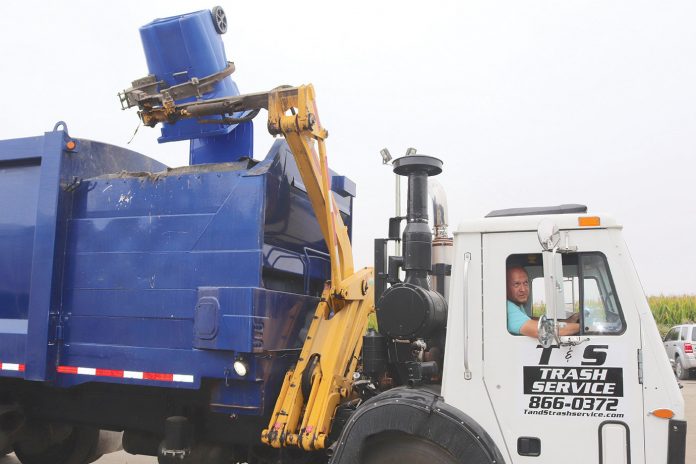 WAYNETOWN — The use of the newest and most advanced technology is becoming invaluable in a labor-intensive industry like waste removal.

Safer and more efficient methods through cutting-edge tech, especially during the socially distanced era, will soon be routine for waste removal workers at T&S Trash Service through an automated trash pickup program.

“Then we are gonna try to have it completed for everyone by Jan. 1 — all residential and commercial customers,” Newlin said. “We constantly try to learn and evolve as a company to make it better, not just for us and our employees, but for all of our customers, because we want to be around for the next 100 years.”

Newlin and his crew will be featuring the new trucks in the Waynetown area before expanding to Darlington, Ladoga and New Market as the first service of its kind in Montgomery County.

“As technology evolves — and it takes a long time for it to get to our industry — it really does make it friendlier for our workforce and our customers,” Newlin said. “And these trucks are a lot quieter: As you put the trash in, they automatically cycle all the time, instead of it sitting in front of your house, revving up the engine, hearing them out there running the levers. But this is a lot more efficient and you don’t have the annoyance of the noise.”

The new trucks also load directly into the top, or middle, of the container, instead of the back. This loading method, along with toters with secure lids designed to be picked up by an extendable arm, make spills on the roadway much less likely.

The company’s transfer station, located on the Montgomery-Fountain county line, processes more than 150 tons of waste each day from areas in Montgomery, Fountain, Warren, Parke and Boone counties.

On the other end of that spectrum, Newlin said the time it takes to empty a residential trash can will be cut to a fraction of what it once was.

“Instead of having to back in to each container and line them up, they just drive in, grab it, set it right back down and off they go,” Newlin said. “We see a real advantage with it.”

Additionally, each truck will only require one operator versus three, allowing workers to spend more time on other tasks and less time in the elements.

A recycle program is also in the works, Newlin said.

The Carlex Design Ford Ranger is not happy

Whataburger Will Roll Out a Roaming Food Truck In 2021

Why get a pickup truck amid the pandemic