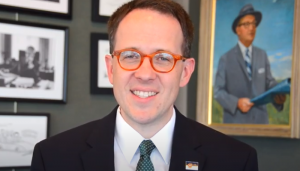 In response to a Navistar announcement earlier this week, the City of Tulsa says it has no intent of issuing an eviction notice as it is currently under agreement with Navistar to negotiate and sign a new lease with IC Bus of Oklahoma and has been moving forward with good faith efforts to negotiate a new lease.

According to the city, IC Bus of Oklahoma and its parent company Navistar launched a campaign and subsequently issued a press release from Navistar’s corporate headquarters, falsely claiming the city threatened to evict IC Bus from its facility.

“The City of Tulsa is currently negotiating the renewal of a lease on 1 million sq.-ft. of industrial workspace owned by the citizens of Tulsa. The tenant has leased that space for two decades at a total lease price of $1. The only thing required of the tenant under their contract is that they properly maintain this taxpayer-owned facility so it is safe,” says Mayor G.T. Bynum.

The public relations campaign “grossly mischaracterizes these negotiations in an obvious attempt to politicize them. My response: the citizens of Tulsa will not be played for suckers,” Bynum says. “I remain confident we can identify common ground to secure jobs and properly maintain this facility. We’ve done so with great success during my time as mayor with other tenants and I see no reason why this case would be any different.”

The city says it has taken actions over the course of nearly two years of negotiations and attempts to partner with IC Bus and Navistar to invest in substantial maintenance issues at the plant. The City of Tulsa says it remains committed to partnering with its largest employers in Tulsa and to leverage public assets and resources in a fiscally responsible manner. For a brief summary and timeline of negotiations provided by the city, CLICK HERE.

Tacofino announces reopening of another location and food trucks