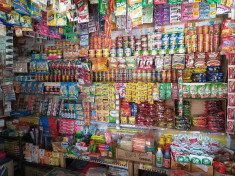 In the crowded capital city of Manila, the Philippines, one quarter of the population of 15 million people has less than one dollar to spend per day. Residents depend upon the tiny and ubiquitous convenience stores, known as sari-sari stores, for daily essentials like food and hygiene products, much of which are sold in convenient single-use sachets (small plastic pouches) for just a few cents each. These sari-sari stores are the major source of the 150 million sachets used daily in the Philippines.

Nearly three million tonnes of plastic waste works its way through the Philippine economy each year with sachets accounting for a stunning 52 percent. In a country made up of seven thousand islands, and lacking proper plastic waste collection and recycling infrastructure, this has dire consequences. The Ocean Conservancy estimates that up to twenty percent of used plastics end up on the country’s beaches and in its surrounding ocean.

Neighboring Indonesia’s 150 million citizens use six million tonnes of plastic yearly, and consumption is set to double within 15 years. In East Java landfills around Gresik City, waste pickers dig through the 100 garbage trucks of daily trash to find the valuable plastics. And muddled in the mix are tiny unrecyclable wrappers and sachets that account for almost 20 of those truck loads.

Southeast Asia currently accounts for roughly half of the global sachet market and this number is set to grow. While rural areas in the region do not have access to municipal waste collection, plastic usage is much higher among urban dwellers. GAIA estimates that in the Philippines, per capita consumption rates for single-use plastic sachets are more than three times higher for urban residents than rural dwellers.

The plastics industry is becoming increasingly reliant upon sachets to maintain revenue as oil usage declines globally. According to a 2018 International Energy Agency report, petrochemicals, including olefins which are used to make plastics, are now the “fastest growing source of oil consumption.” Within this market, sachet packets and wrappers are among the fastest growing segments, with a 19 percent expansion in 2017 alone.

In 2018 some 855 billion sachets were used worldwide, over 100 per year for each human alive. Only 10 percent of all plastics are ever collected and recycled, and the number for sachets is close to zero. 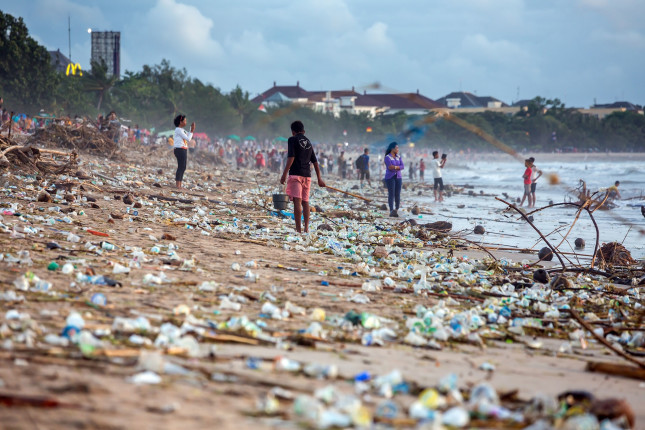 For the Philippines, one solution to the sachet waste crisis may be found in a cultural practice called “tingi”—a mindset of careful consumption and conscientious usage reduction. In 2019 during “National Zero Waste Month” entrepreneurs in Bacolod City, in the spirit of tingi, launched the first “Wala Usik” (nothing wasted) store. Items are sold “naked” without packaging and customers can either buy in bulk or small increments using reusable containers. Since then, sari-sari stores have been converted to Wala Usik stores in eight nearby cities.

In Indonesia, local entrepreneurs look to the ocean itself for a solution to the ocean plastic crisis. Seaweed is a large part of the Indonesian economy. A local startup, Evoware, invented an edible bioplastic made of seaweed. The technology is new but promising and could play a large part in the reduction of ocean plastic waste as nearly forty percent of sachets are used to package foods or products like dried soaps and could be replaced with bioplastics.

Multinational plastic producers have begun to address the flood of sachet plastic in Southeast Asia. Parañaque City, in the Philippines, is working with plastics manufacturers, including Nestlé, to build a sachet recycling facility. Unilever’s 2012 Sachet Recovery Program encouraged consumers to return used sachets by rewarding them with free sachets. Before the program ended, it captured four to ten million sachets per year, a tiny fraction of the 60 billion produced. Admitting the scale of the problem, CEO Alan Jope recently announced Unilever will reduce virgin plastic production by half, increase post-consumer product collection and develop reusable containers, however he did not mention sachets.

Ultimately, ending the plastic waste crisis may require a global treaty—moving beyond “downstream” plastic waste to prioritize “upstream” producer responsibility. China’s 2018 National Sword policy banning all plastic waste imports, did not end the plastic flood but rather diverted the trade, proving that plastic waste is an international problem. After the sword fell there was an incredible spike in shipping containers arriving on the shores of Southeast Asia. Indonesia alone saw a 141 percent increase of imported plastic waste that the government has since struggled to cope with.

When polled, half of the Filipinos surveyed agreed that more plastic waste regulation is required and 84 percent said that financial responsibility for managing sachet waste products should be extended back to the plastic producers. Although they can exist in many forms, these Extended Producer Responsibility (EPR) laws are not a new concept.

Since the 1990s, countries, states, and cities around the world have passed numerous EPR laws ranging from product take-back requirements to outright bans, as are increasingly implemented with plastic bags. A popular example of an EPR requirement is the bottle deposit whereby consumers pay a fee when they purchase the single-use item and the fee is refunded when the waste is returned. Some schemes even require a minimum amount of recycled content in products to help create a market for collection and recycling.

EPR laws have proven to be economically beneficial. During a recent interview, Miko Aliño from GAIA explained that during monsoon season, flooding in major Filipino cities is made much worse when sachets and other plastic waste clog the waterways and drainage systems. And the city of San Fernando’s zero waste initiative is saving millions of dollars each year in waste management and disposal.

Recent reports from the United Nations, PEW, and Duke University all point to a combined approach of less plastic, new materials, and more recycling as necessary to bend the curve on plastic pollution. This systems change approach will lead the world closer to a zero waste or circular economy. 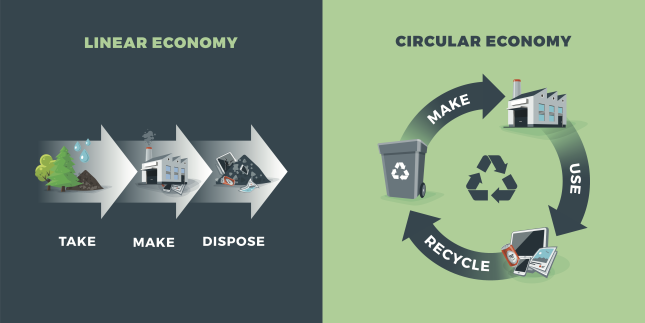 While there are currently national, regional, and international regulations on waste, none cover sachets. A bill under consideration in the parliament of the United Kingdom would ban many types of single-use plastics and institute a plastic packaging tax, and a broad coalition is fighting to include sachets. The European Union has a law banning single-use plastic set to come into force in 2021, but it does not include sachets.

Under Philippine law RA9003, producers are responsible for their waste, however it suffers from poor implementation and has not been amended to include sachets since its passage in 2000. Citing the millions of dollars it costs the government to deal with the waste each year, environmental activist Von Hernandez and Filipino Senator Cynthia Villar are calling for new EPR laws in the Philippines.

The 1989 Basel Convention—the signature international law on international waste trade—took place before the sachet waste explosion.  The 2019 Basel amendment requires countries to give prior informed consent before waste shipments are imported, however, some government ministers in Europe, along with the Basel Action Network, are still calling to further strengthen the Basel Convention, particularly with regard to single-use plastics. Most Southeast Asian nations have ratified the treaty, but the United States has not.

Speaking at the launch event for the PEW Breaking the Plastic Wave report in July, Winnie Lau, Senior Manager for the Preventing Ocean Plastics program, said a delay of just five years on global action to stem the tide of plastic waste equates to another 80 million tonnes of plastic entering the ocean. Even though we have seen bottom-up action to clean up and prevent waste, many national and international actions fail to adequately address the scale of the pollution. The global movement in favor of EPR regulation continues unabated, just like the flow of plastic waste they seek to stop.

Eli Patton is a current research intern for Wilson Center’s China Environment Forum. His research focuses on the environmental and security aspects of China’s outbound investment policy. He is on track to complete his MA in Asian Studies from the George Washington University Elliott School of International Affairs next summer. He is an accomplished translator and has lived and worked in China and Taiwan for numerous years.

Lead Photo Credit: Looking at a sari-sari storefront in the Philippines, Shutterstock.com, All Rights Reserved.