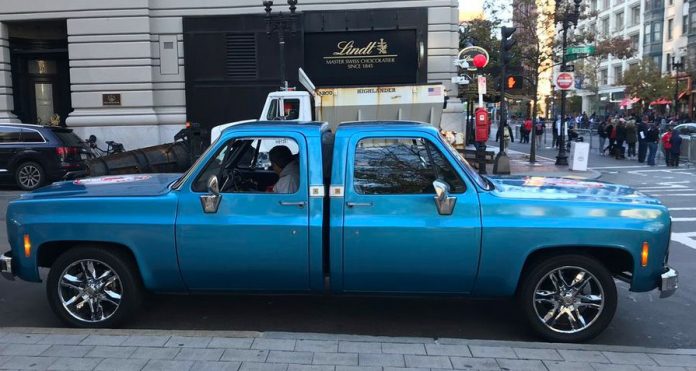 Eric Wright can’t drive far before people point, shout, make jokes and take pictures. Wright hasn’t done anything wrong. It’s just that most observers can’t figure out what’s going on when they view him in his truck on city streets, on the highway and in parking lots.

Wright, who was seeking a truck to promote his business couldn’t find exactly what he wanted on eBay. But what he discovered was a truck made from nearly identical opposite-facing cabs. It was used as a marketing attraction but never driven. But now it is, and it’s perfectly legal.

The truck was originally from Arizona. It had been built by a Chevy dealership and a GMC dealership and they used to park it in front of one or the other location to attract attention to the respective businesses.

While the truck has the same steering wheels, seats and liner and looks symmetrical, it can only be driven from one side. The engine is under the driver’s side of the truck; the trunk is located under the hood of the passenger’s side (back).

The truck has LED turn signals in front and large brake lights from a school bus in back.

The two-face truck has a vanity plate that reads “What The.” It’s a shortened version of the well-known phrase” “What The F***?” It’s what a DMV representative said when Wright first registered the vehicle.

“All I can say, is I just have more fun driving this than anything I’ve ever driven,” said Wright, who lives in Tyngsborough, Mass. “I drive this and I get my picture taken every two minutes. It’s pretty cool.”

Support independent journalism. Many of us are undergoing pay cuts and decreased hours. Shop on Amazon using this banner, and The Weekly Driver receives a small commission at no cost to you.

Advertising Disclosure: TheWeeklyDriver.com is a participant in the Amazon Services LLC Associates Program, an affiliate advertising program designed to provide a means for sites to earn advertising fees by advertising and linking to Amazon.com.