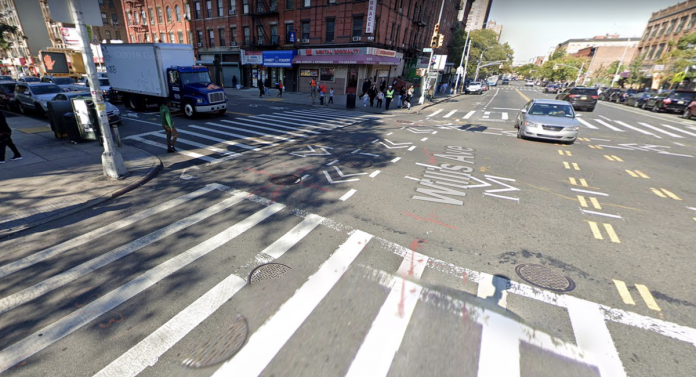 Two bicyclists were killed by drivers in the span of a week in separate collisions that happened in the Mott Haven section of the Bronx.

Around 7:45 p.m. June 5th, Ivan Morales, 23, was heading southbound on a bike lane on Willis Avenue when police said he slammed into a 2013 Lexus sedan driven by a 62-year-old man driving east on East 138th Street.

Morales was taken to NYC Health and Hospitals/Lincoln, where he died of his head and body injuries Monday. The Lexus driver remained on the scene and the investigation was ongoing.

Morales was a food delivery worker, according to a statement from Danny Harris, executive director of Transportation Alternatives, the street safety advocacy group.

Streetsblog reported that Morales moved to New York in 2016 from Mexico, according to family members, delivering pizzas and hamburgers for Wimpy’s in East Harlem and sending money to his mother. He was biking on his day off when he was killed, Streetsblog said.

Around 4:52 p.m. on Thursday, Jose Luis Estudillo Garcia, 38, was biking northbound on Park Avenue near East 138th Street in Mott Haven when a 53-year-old man driving a 1999 box truck struck him. The Daily News said the box truck driver was apparently pulling out of a commercial garage onto northbound Park Avenue when he tried to navigate around a double-parked vehicle as Garcia was passing between the two vehicles. Garcia lost control and fell off his bike to the street, where the box truck driver ran over him, according to NYPD. He was pronounced dead at the scene.

The Daily News reported that Garcia, a father of two children, was headed to his Bronx home on Thursday from his shift at Le Gourmet Manhattan on the Upper East Side when he was struck and killed.

“Family members recalled him as cheerful and hard-working, sometimes putting in a full week of eight-hour shifts with no time off,” the Daily News reported. His wife Amparo Guzman told the paper when “asked about her favorite memory of Garcia, his widow replied, ‘Every year I spent with him.’”

Transportation Alternatives said the box truck was a Freightliner — described as a 20-footer by the Daily News — and the illegally double-parked vehicle was another truck. “Of the six fatal crashes involving cyclists to date in 2020, all have involved male drivers, and five of the six involved a large vehicle, like a truck, bus or SUV,” Harris said in the statement.

“Compared to Manhattan and Brooklyn, the Bronx has seen comparatively little investment in safe cycling infrastructure, and the Bronx saw a 62 percent increase in cyclist injuries during the first quarter of 2020 compared to the same time last year, just as injuries were on the decline in the other four boroughs,” Harris said. “New York cannot continue to be a city where cycling infrastructure is installed slowly over years in a piecemeal fashion, and mostly in predominantly wealthy, white neighborhoods. As our city begins to recover from a pandemic, Mayor de Blasio and the Department of Transportation need to prioritize the rapid construction of a protected and connected bike network that serves the five boroughs.”

Morales and Garcia are the fifth and sixth cyclists to be killed by drivers in 2020.

Back the Blue campaign running strong in NEPA | Times Leader