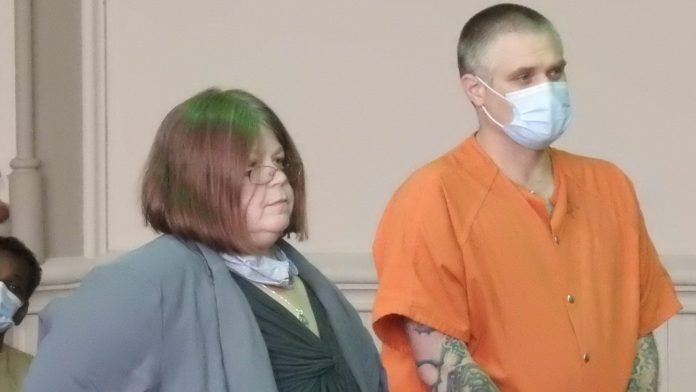 After changing pleas to guilty, William Nottingham and Justin Moore wait to learn their fate

William “Doug” Nottingham, 43, changed his pleas from not guilty to guilty earlier this week in Muskingum County Common Pleas Court. He is charged with unlawful possession of a dangerous ordinance, a fifth-degree felony, breaking and entering, a fifth-degree felony, and theft of items less than $1,000, a first-degree misdemeanor. The joint recommended sentence from counsel is an aggregate term of 14 months.

As stated in open court, a black Chevy S10 pickup truck was spotted Feb. 6 and 10 at a farm on Adamsville-Otseo Road. The owner had died about four years ago. A person who knew the family saw the truck on Feb. 6, took a picture and sent it to them. They posted the picture on Facebook and was told the truck belonged to Nottingham. The truck was spotted again on Feb. 10.

Authorities contacted Nottingham, searched the truck and found items from the farm. They also found a box of old dynamite from the property, leading to the dangerous ordinance charge.

Nottingham was sentenced in February 2014 to four years in prison on charges of aggravated robbery, theft, tampering with evidence possession of drugs and permitting drug abuse. While counsel was fine with moving straight to sentencing, Cottrill ordered a pre-sentence investigation related to post release control from that earlier case.

In the first case, on May 12, Moore was driving a black Doge pickup truck that was stopped by authorities on Linden Avenue because its license plates did not match the vehicle. In Moore’s pockets officers found a cut plastic straw and a folded bill with a rock like substance that tested positive as meth.

In the second case, on June 2, Moore attempted to leave the Walmart on Maple Avenue with a shopping cart filled with unbagged items totaling nearly $1,700. Employees attempted to stop Moore and a short foot chase ensued with Moore pushing the cart. A member of the Zanesville Police Department was in the parking lot and assisted with the incident. Moore had stolen from the retail store before and was on the store’s no trespassing list. This led to the charge of burglary.

While counsel agreed to go straight to sentencing, Cottrill ordered a pre-sentencing investigation to sort out post release control Moore is under from a previous case. In August 2019, Moore received nine months in prison for domestic violence.