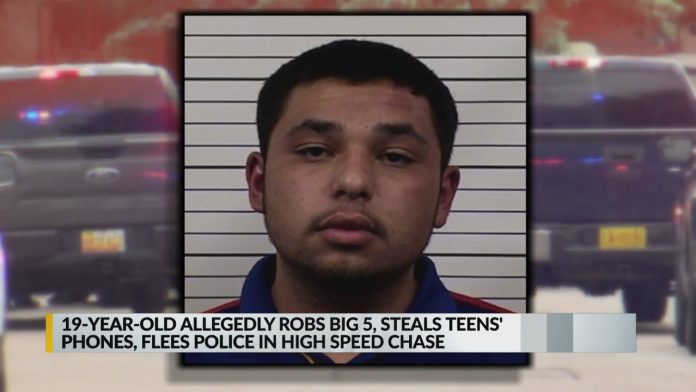 ALBUQUERQUE, N.M. (KRQE) – A string of armed robberies prompted a high-speed chase through Albuquerque’s northeast heights. Without the help of two teenagers, police may have not found this accused thief as fast as they did.

The suspect made a critical error that ended up leading police right to him after he was accused of committing armed robbery three times. Albuquerque police say it started at the Big 5 Sporting Goods store near San Mateo and Menaul.

Police say 19-year-old Lawrence Lopez Jr. walked into the store around 6 p.m. Saturday evening, and walked up to the cash register. An employee told police that Lopez pulled out a black handgun and pointed it at her and told her to, “hand me all the money in the register,” and she complied.

Police say Lopez then left the store and ran into two teenagers whom he allegedly pulled a gun on also, demanding they hand over their cell phones before running off. It’s likely Lopez was not aware that the teens had the Find My iPhone set up on their phones. Officers say they could see the phones were at the Walmart on Carlisle and Menaul.

Undercover officers spotted Lopez and the distinct cobalt blue truck he was driving. When officers tried to pull him over, Lopez took off, speeding down I-40 before surrendering in a heights neighborhood near Candelaria and Louisiana. “We saw a two door, cobalt blue truck speed by about 50 mph. We saw two cop cars screeching, coming to a half. Then, we saw 16 cop cars, the assailant go tout of this truck with his hands up and surrendered,” Sabrina Jackson, who witnessed the chase, said.

Police say Lopez only got away with $272 from Big 5 but they did find $400 on him at the time of his arrest. Lopez had no violent criminal history prior to his arrest Saturday. Lopez is facing several felony charges including three counts of armed robbery and aggravated fleeing.

2020 Nissan Frontier Real-World MPG: Not What We Hoped