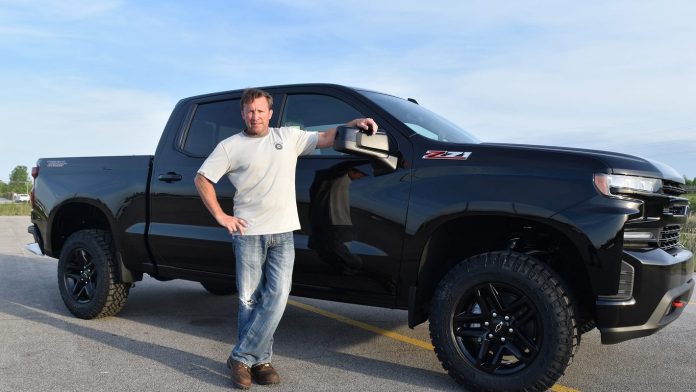 UAW Local 2209 Shop Chairman Rich LeTourneau is known as a convivial fireball, often referred to as Richie by the Fort Wayne, Indiana, car dealers who know him best.

They consider him a friend, a partner in the community, and their secret weapon in the ongoing truck wars.

“General Motors is a big company and they lose vehicles,” said Tom Kelley, chairman of dealership Kelley Automotive Group in Fort Wayne. “If I don’t know where the truck I order is at, we can’t go in the plant and look for it. So we call Richie and I say, ‘Here’s the VIN number.’ He finds it.”

“Twice he’s found a vehicle that was built in Fort Wayne and for some reason it ended up in Flint, Michigan,” said Kasey Shirey, partner in dealerships City Chevrolet and City Ford in Columbia City, Indiana. “He gets it to us the next day. It’s quite impressive what he’s able to do for us.”

LeTourneau has helped dozens of Indiana and Ohio car dealers track down the whereabouts of the pickup they ordered from GM’s Fort Wayne Assembly plant, which builds light-duty pickups.

He doesn’t do it to be a hero, he does it because it’s job security. He wants GM to sell as many of the pickups built at the plant as possible and that means getting them to dealers.

“We’re the ones who do what we can to protect our job security, I’m not saying the plant management doesn’t, but we live here,” LeToureau said. “Fort Wayne is not a stepping stone for us, this is our community.”

Few pickups in the pipeline

Some dealers have contacted LeTourneau after seeing him mentioned on social media postings. Others, such as Tom Kelley, have a deep friendship that started as young men having a beer together some 30 years ago. It’s evolved into a quid-pro-quo brotherhood extending beyond business to community service.

“When they were on strike, Richie called and he said, ‘We have single moms who aren’t making it right now.’ So we took food out there,” Kelley said, referring to the UAW’s 40-day strike against GM last fall. “It’s ongoing things like that between us and them.”

LeTourneau’s help is in high demand these days.

But the pickups are in tight supply. GM idled all of its U.S. plants in late March, restarting most on May 18, including Fort Wayne and its other pickup plant, Flint Assembly, where GM builds its heavy-duty pickups.

Car dealers say they have back orders on many GM vehicles, but especially pickups. Shirey said he’s down to three Silverados; he typically would stock at least 40.

So when the assembly line at Fort Wayne started running again, LeTourneau’s phone started buzzing. Hungry dealer pals were hoping he could help them get a pickup to their parking lot faster.

“I got three calls today,” LeTourneau told the Free Press Friday morning. Then, on Monday afternoon, LeTourneau said he got several more dealer calls. One dealer was looking for seven pickups he ordered, wanting to know when they might arrive.

On Tuesday, dealer Tom Kelley said LeTourneau found four GMC Sierra pickups the dealership had ordered. They had gotten lost in the system. They were quickly rerouted to his store and arrived there late Wednesday, Kelley said.

LeTourneau said he gets calls from dealers “constantly.”

“‘Rich, can get us more trucks man?’” LeTourneau said with a laugh, acknowledging he doesn’t have the power to procure trucks or take orders. “Some are already built and within our lot, or on the repair lot or at the (shipping) lot. Some end up in Flint. So I ping trucks every day for dealers.”

By ping, LeTourneau said he plugs the vehicle identification number into the computer and GM’s OnStar finds the vehicle location. He can give the dealer an idea of when it will arrive.

“We’ve had trucks in Ohio that were supposed to be in Indiana,” LeTourneau said. “It’s just logistics. Or, they’re in our lots waiting on minor repairs before they can ship.”

LeTourneau’s ability to track down the vehicle’s location is a big help to dealers.

“Someone’s doing something about it,” Kelley said. “At least we have peace of mind and we can tell the customer we’ve got someone at the plant who is babysitting your vehicle.”

Since the plant has restarted production, LeTourneau said the calls from dealers have increased. Dealers struggled to restock pickup inventory after the UAW’s strike last fall dinged production. Then, the virus shut down the plants.

“I probably get four to five more calls a week than I used to get,” LeTourneau said.

If it sounds unusual for a shop chairman to be hands-on with product shipment, well, it is uncommon.

“I’ve never heard anyone else experiencing a shop chairman doing it, but he’s hands-on and he wants to make sure the product he represents gets there so that people are buying his brand,” said Shirey, who’s been in the car dealership business for 18 years. “He’s very passionate about the brand.”

UAW spokesman Brian Rothenberg said he was not familiar with the practice of local union officers being asked to track product, but it did not surprise him. Most local union leaders have worked at the plants for decades and are fluent in all aspects of the operations, he said.

A call to the union leadership at Ford’s Dearborn Truck Plant, where the F-150 is made, to ask if they help dealers track orders, was not returned.

LeTourneau started with GM in 1981 in the now-shuttered Janesville Assembly Plant in Wisconsin.

He moved to Fort Wayne in 1987. Soon his loquacious personality won him a job as a union committeeman. Tom Kelley’s dad was a Chevy dealer at the time and Tom was a Buick-GMC and Cadillac dealer. The plant manager bought a car from his dealership and invited the two men to the plant’s open house.

“Richie was in the union, so he was there. And Richie is not bashful,” Kelley said. “I was 33 at the time and Richie was in his late 20’s and so we went out for a couple beers and we became friends.”

Shirey met LeTourneau two years ago at a fundraising event. Now they talk at least twice a week.

In 1997, LeTourneau was elected shop chairman. He has served in that capacity ever since. He credits his longevity on the job as the reason why many dealers view him as their go-to-guy.

“I’ve been around longer than anybody,” LeTourneau said. “So the dealerships know me from east coast to west coast.”

The U.S. top selling full-size pickup is the Ford F-150. But the Silverado has edged out the Ram in the battle for second place this year. Sales of the profitable pickups are critical to GM’s bottom line.

GM’s dealers across the country have continued to sell the vehicles despite stay-home orders in many states during the coronavirus pandemic.

“They kept their service lanes open and helped us earn 40 percent of the retail market for full-size pickups in recent months,” said GM spokesman Jim Cain. “Our assembly plants in Fort Wayne, Flint Assembly and Wentzville are back working three production shits so we can meet strong customer and dealer demand for Chevy and GMC pickup trucks.”

GM builds its mid-sized Chevrolet Colorado and GMC Canyon pickups, plus its full-size vans, at Wentzville in Missouri.

Despite going back to three shifts, LeTourneau said Fort Wayne won’t be back to making its usual 1,290 new pickups a day until the end of the week or early next week. On one shift, the plant was making just 200 vehicles a day, he said.

“We’ll get them done as fast as we can,” LeTourneau said.

On Monday the second shift of workers returned to the job at 2:30 p.m. for the first time in several weeks. They were in safety protocol orientation for the first part of their shift.

“They do the groups in waves, so we won’t have a full assembly line until they’re all done with the orientation,” LeTourneau said. “They won’t start building any trucks until 5:30.”

The third shift started around 10:30 P.M. and the indefatigable LeTourneau said he would be there when that shift walked through the door.

“It’s been a long day already,” LeTourneau said. “But we’ve been gettin’ through it.”