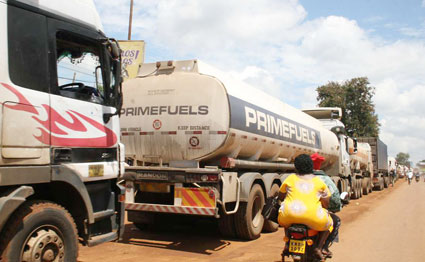 By XINHUA
More by this Author

Uganda on Thursday said it is devising measures to control entry of cross-border cargo truck drivers as the surge in the number of confirmed Covid-19 cases in the country is attributed to them.

Jeje Odongo, minister of internal affairs told reporters here that while the country is sacrificing to keep the spread of Covid-19 minimal, the efforts are being undermined by imported cases.

Odongo said that on Tuesday this week the country had 56 cases but the number jumped to 61 on Wednesday on account of five cross-border truck drivers, four from Kenya and the other from Tanzania. The minister said the national task force is studying possible remedial actions.

One of the measures is relay driving, whereby a driver from a neighbouring country hands over the vehicle to a Ugandan driver at the border crossing after the vehicle has been sanitized.

The other measure that is being discussed, according to the minister, is deploying rapid test kits at the border so that the results are obtained before the driver proceeds within the journey.

Odongo however noted that this may be prohibitive since each test costs $65 and there are three people in the truck. An average of 1,000 trucks cross into the country daily.

The other possible measure is to have the drivers park in designated areas to limit their interaction with the public.

Uganda allowed the continued operation of cross-border cargo trucks, trains and air cargo despite closing all its border entry points. The move according to government is aimed at not stalling the running of the economy.