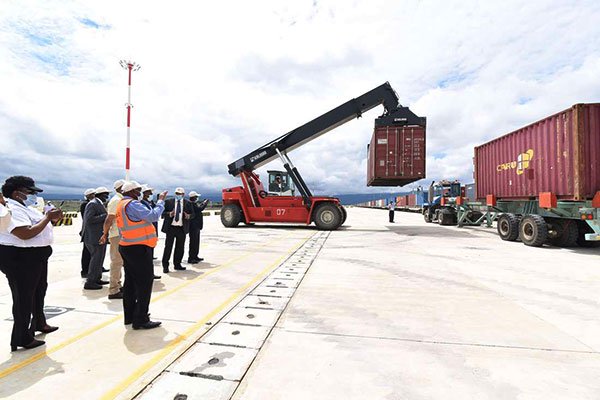 Uganda has refused to budge on its opposition to mandatory use of the Naivasha Inland Container Depot as directed by Transport Cabinet Secretary James Macharia.

This is even as Covid-19 infections among truck drivers soar.

Last week, Kenya announced Naivasha dry port as the transshipment centre for all transit cargo. This was one of the measures it said would help contain spread of the virus.

Covid-19 testing numbers for Mombasa obtained by Saturday Nation show that over 200 truck drivers are among the 653 positive cases recorded by the county, a 30 per cent share, showing how fragile the situation is for the transport and logistics sector.

Since May 30, more than 60 drivers have tested positive for the coronavirus in Mombasa, as the government plans to start targeted mass testing for an estimated 2,500 drivers.

On Thursday, Uganda, which is the Mombasa port’s biggest customer, said Kenya should suspend compulsory evacuation of cargo direct from Mombasa to the Naivasha Inland Container Depot (ICD) since the facility is not ready for use and has no basic amenities to facilitate trade.

Uganda’s Minister for Works and Transport Gen Edward Katumba asked Mr Macharia to rescind his decision and address issues raised by transporters before implementing the directive.

“I would like to reaffirm the Uganda government’s commitment to use the Naivasha ICD in the spirit of regional integration. On the other hand, I would like also to reaffirm that the findings of the technical team in their visit to the ICD need to be addressed to improve the facility to make it more attractive to shippers,” said Mr Katumba.

He said the use of the Naivasha ICD should remain optional but the government of Uganda will continue to encourage the business community in the country to use the SGR because of its benefits. On Tuesday, Mr Macharia toured the Naivasha ICD facility, where he reiterated that the goods destined for Uganda and other hinterland countries will be picked from the depot as they seek to limit the number of drivers accessing the Mombasa port, now a Covid-19 hotspot.

“The Naivasha ICD is ready and is so important for the country and the region especially at this time when we are dealing with the Covid-19 pandemic. The transport corridors have been the main transmission zones for Covid-19. The ICD will reduce the risk on the road by about 600km,” Mr Macharia said.

Kenya Transporters Association (KTA) has also opposed the move, arguing that there was no consultation before the decision was made.

“We have reached out to transporters in Uganda who are main Northern Corridor users and in solidarity we shall announce date to suspend our services until the Kenyan government reconsiders its decision,” said KTA executive director Denis Ombok.

Some Ugandan traders have also joined their government in opposing the move. Mukwano Group, one of the biggest manufacturers, on Thursday wrote to Kenya Ports Authority acting managing director Rashid Salim protesting over the move, arguing that “it still has contractual carriage obligations between itself, shippers and shipping line”.

“We have learnt that you intend to rail all containers to Uganda through the Naivasha ICD. Mombasa is our point of discharge and on carriage is the consignee risk and account. I wonder how you can unilaterally rail our containers to Naivasha without our consent,” Mukwano managing director Alykhan Karmali protested in the letter.

KPA’s data shows Uganda’s transit traffic between January and April dipped for the first time since the 2007 post-election violence.

During the period, Uganda recorded a 1.9 per cent drop.

“The Covid-19 and other underlying challenges, which included clearing of transit cargo by Uganda Revenue Authority (URA) and instituted changes (in Uganda customs systems – ASYCUDA), which affected the fluidity of gating out cargo,” the Mombasa Port and Northern Corridor Community Charter analysis report released late in May said.

Tanzania, which is still having simmering trade issues with Kenya, was the most improved user of the Mombasa port.

Dar recorded a 41 per cent rise in the transit traffic to Mombasa port, with 111,000 tonnes handled in the four months to April, from 79,000 in a similar period last year.