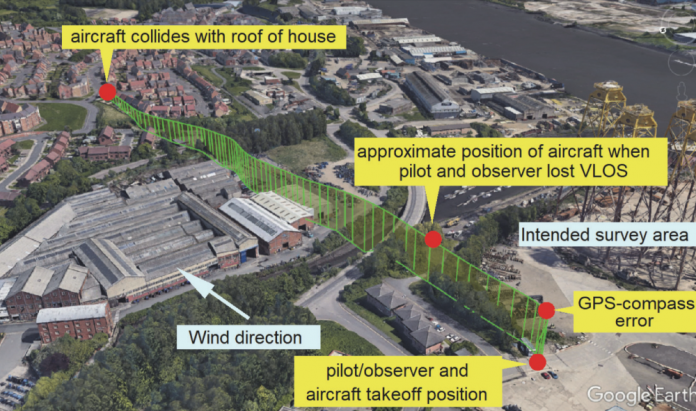 A report by the UK’s Air Accident Board has investigated the December 2019 crash of a DJI Matrice M600 Pro into a residential neighborhood. The report makes some recommendations to help avoid a future mishap like this one, which investigators say had the potential to cause serious injury to a person on the ground.

The report outlines the basic facts of the incident. A DJI Matrice M600 Pro was about to start a construction site survey. The drone was in an automated flight mode, with specific way points programmed for the job. Takeoff was normal. But at about 65 feet above ground level things turned sour. A GPS-compass error suddenly caused the aircraft to return to ATTI mode, which requires manual flight. The pilot and observer began frantically trying to initiate Return To Home, but the drone was drifting away with the wind. Soon it was out of sight and heading toward residential homes.

The aircraft was hidden behind a line of trees and beyond the visual line-of-sight of the pilot or observer. And because they couldn’t see their aircraft, they didn’t want to try to take over manual control. As they continued trying to initiate RTH, the aircraft moved on a path toward a home. This image is from the Air Accident Board report:

If you’ve ever had a flyaway, you’ll know that the pilot and observer must have been absolutely sickened by what was taking place. An expensive drone, drifting away, and not following the RTH command. What’s even worse is that it was moving into a residential area. The intended survey area, seen mid-right in the above image, was not populated. And as you can see, the error began early in the mission.

And then the drone just kept going and going. Although it was maintaining its altitude based on barometric pressure, the land below it was rising. And so it was just a matter of time before the Matrice would hit something.

Here’s how the report described the incident:

The takeoff was normal but, as the aircraft approached 100 ft amsl (a height of about65 ft agl), the pilot noticed that a gps-compass error was displayed on the controller.The aircraft stopped climbing and proceeded to fly in an east-north-easterly directionat a ground speed of about 13 kt, whilst maintaining an altitude of about 100 ft amsl (Figure 1). The pilot and observer reported that they were initially taken by surprise. The pilot then selected the return-to-home (RTH)4 function on the controller several times, but the aircraft did not respond. Within about ten seconds, the pilot and observer lost visualline of sight (VLOS) with the aircraft when it travelled beyond a line of trees located at the boundary of the construction site. No manual flight control inputs were made using the controller.

And then what happened?

According to the report, this:

The aircraft proceeded to fly overhead a large industrial area before approaching a housing estate located 300 m from where it had taken off. The aircraft had continued to maintain its altitude; however, its relative height above the ground reduced as it approached the housing estate due to the rising terrain. The recorded logs from the aircraft showed that, at 1521:07 hrs, the aircraft collided with the roof of a house before falling into the rear garden of the property (Figures 2 and 3). There were no persons in the garden at the time. The aircraft’s propellers, arms, landing gear, gimbal, and camera lens were damaged. The flight time from when the GPS-compass error had occurred and the aircraft colliding with the house was 75 seconds. The controller had remained in radio contact throughout the flight.

It’s worth noting the final sentences from both those preceding paragraphs: “No manual flight control inputs were made using the controller” and “The controller had remained in radio contact throughout the flight.” These will come back later.

But there are a couple of other things worth noting here. The first is that the Air Accident Review Board considered that the weight of the M600 Pro was heavy enough to have caused serious injury or even death had it fallen on a person on the ground. Here’s how the report reached that conclusion:

The AAIB is not aware of any research relating to the potential for injury from a falling UAS. However, in the 1990’s, a dropped object prevention scheme (DROPS)7 was introduced as part of a safety initiative by the UK Oil and Gas industry. The program has since expanded to include about 200 organizations, with the development of a DROPS analysis calculator8. This provides an indication as to the possible outcome9 of a blunt object in free fall striking a person wearing personal protective equipment (i.e., hard hat, eye protection).

Analysis using the DROPS calculator indicated that a blunt object with a mass of more than 2 kg (the mass of the accident aircraft was 12.8 kg) falling from a height of 6 m (~20 ft) agl (the approximate height that the aircraft fell from the roof of the house) could result in a fatal injury to someone wearing a hard hat.

Here’s what the Matrice looked like after falling into the person’s back yard:

The report notes that the M600 Pro logs were uploaded to the manufacturer for analysis. The report states “the reversion to ATTI mode had been caused due to a mismatch between the aircraft’s GPS derived heading and its magnetic compass heading data. This was attributed by the manufacturer to have been caused by signal interference that had affected the magnetic compass. The error had continued throughout the flight. The manufacturer advised that if the error had subsequently cleared, the automated flight modes would have been re-established.”

That raises the question: What caused the EMF? Was it proximity to other homes with their own Wi-Fi networks and other gadgets? Or was it possibly from a GPS jammer? These devices are legal to sell (and illegal to use) in the UK. Often they are used by commercial truck drivers who wish to disable GPS tracking on their vehicle. Could one have been operating in the area?

That’s tough to say. But when the drone operators realized their machine had crashed, they sent up a second drone to look for it. And that drone was quickly messed up by interference. (They were able to get this one back on the ground).

Well, the first one is that electro-magnetic interference can really ruin a drone pilot’s day. Many professionals use EMF detectors to scan an area prior to a flight. Given that they’re relatively inexpensive devices vs. the cost of a drone, it’s probably worth considering this.

But the report also suggests that the pilot perhaps should have attempted to take over and fly the drone manually. It doesn’t address the complications of doing this when the drone is Beyond Visual Line of Sight, but presumably the pilot could have simply gained altitude until it was back within sight, and then brought it home manually.

Here’s what the report recommended in its two-paragraph conclusion:

The pilot was required to take manual control of the aircraft following the loss of its automated flight modes due to signal interference. However, no manual control inputs were made, and the aircraft subsequently drifted with the wind until it collided with a house roof and fell to the ground. No persons were injured.

Operators holding a PfCO issued by the CAA (Civil Aviation Authority) are not currently required to practise routinely for emergencies or demonstrate the ability to fly their aircraft in a degraded flight mode. These skills are perishable, but as this accident shows, they may be needed at any time; it is important that they are maintained to prevent a risk of injury to people or damage to property.

As a result of this incident, the pilot refreshed their skills flying manually. As per the report: “The operator’s pilots have undergone refresher training on responding to emergency situations and operating their multi-rotor UASs in the ATTI flight mode.”

The lesson of the day? Keep your manual chops up, know the emergency procedures for your particular type of drone – and be prepared if RTH fails. Also, consider picking up an EMF detector. You have nothing to lose.

42-year-old firefighter is one of the state’s youngest victims of COVID-19...