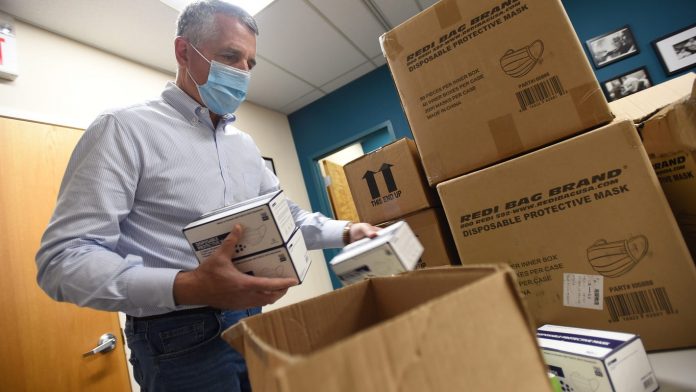 Tom Toronto, President of Bergen County’s United Way, sorts through PPE and sanitizer in Paramus to distribute to group homes on Monday, May 4, 2020.

Assisted living facilities in New Jersey — home to thousands ofresidents with disabilities — are receiving protective gear thanks to the efforts of one man.

Tom Toronto, president of Bergen County’s United Way jumped into action right after he read a story that thousands of people with disabilities were not included in the state’s emergency COVID-19 planning and had no personal protective equipment.

“It was a surprise that everyone was in such deep need,” he said.

In March, Arc of New Jersey, along with other companies that run group homes and apartments for individuals with developmental disabilities said they were left out of the loop when it came to supplies of personal protective gear (PPE) as institutions shuttered in the face of the novel coronavirus.

Those who lobbied to be included in the distribution, including Arc of Bergen and Passaic County’s CEO Kathy Walsh, said they were “ignored.”

Toronto read their story published on NorthJersey.com and The Record and Daily Record, and was moved to act.

“We placed our first order in the beginning of April after the article appeared,” Toronto said. “That ignited us. The vulnerability of people who live in group homes and supervised apartments hit home,” he said. Bergen County’s United Way ordered 112,000 masks, 500,000 pairs of gloves, 4,800 bottles of hand sanitizer, and 3,000 N95 masks. The N95s are the “last piece to come in this week.”

The group spent about $122,000 on the personal protective equipment and notified the state’s three trade associations: Arc of New Jersey, Alliance for the Betterment of Citizens with Disabilities and New Jersey Association of Community Providers that the gear could be picked up at his Paramus office.

Story continues below the gallery.

They’ve distributed truckloads over the last few weeks with more to come, including the N95 masks that are expected to arrive this week.

“We are going to selectively distribute those to group homes where there has been a diagnosis of a resident who has COVID-19,” Toronto said. “We are going to pinpoint those more because they are difficult to get and expensive.”

United Way paid just under $4 per mask. Toronto said years of building affordable housing has given him roots in the community and he’s been making sure to include independently run assisted living homes and apartments among his deliveries of PPE. His goal is to get to everyone.

“We are looking for vulnerable group homes and agencies. If we have missed any, we want to make up for that,” he said.

Eden Autism Services, Abilities of Northwest Jersey, Brain Injury Alliance, Children’s Center of Monmouth County, Easterseals, Spectrum for Living, Matheny School and Hospital are companies across the state that have either received a box of supplies from Toronto or sent a truck to his office.

“We picked up the PPE for all of the ARCs of New Jersey and then sent them out to all of the chapters,” said Walsh. “The donation from the United Way was wonderful, especially given the cost of the PPE. I saw a number of emails going out saying thank you to him.”

Toronto said he received “a very nice letter of thanks from the Arc of Cumberland County yesterday.” The fact that group homes across the entire state are in dire need and have been in dire need of PPE was a revelation. From one end of the state to the other, the need is consistent and deep.”

Mother: Single mom continues to care for son with disabilities as she turns 100

And this brings up an important point, Toronto said. These supplies are disposable. All told, he’s collected over 600,000 PPE.

“How long will that last? I don’t know. What do we do next? This is going to be going on for a very long time and masks are going to be a requirement for going anywhere. Will there be a channel of distribution to the group homes through the state Department of Developmental Disability or are they going to have to rely upon only private sources?”

Anyone still in need can email Toronto directly at ttoronto@bergenunitedway.org.

Gene Myers is a local reporter for NorthJersey.com. For unlimited access to the most important news from your local community, please subscribe or activate your digital account today.

Child on bicycle struck, killed by pickup truck in Scio

5 Steps to Field Dressing a Deer