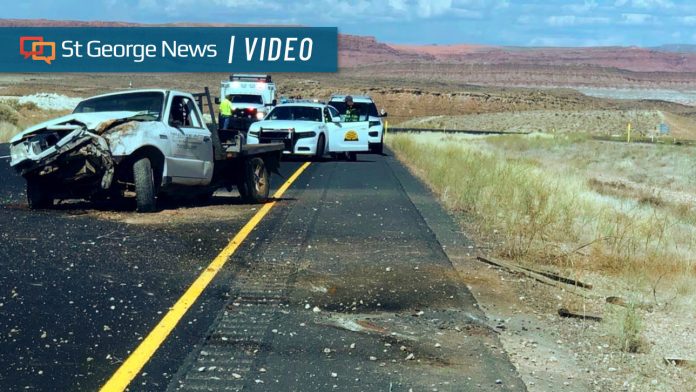 ST. GEORGE — A warrant that was recently unsealed revealed that the fatal crash on state Route 7 in July is being investigated as a possible negligent homicide case, and one issue in question involves the airbags that failed to deploy during the rollover.

According to the affidavit filed by the Utah Department of Public Safety, investigators obtained a search warrant for the Ford pickup truck involved in a crash that took place on Southern Parkway July 16 and killed 20-year-old Jayden JohnIvan Snyder, of Mona.

At the time of the crash, troopers determined that the driver was heading east toward mile marker 4 when the right rear tire of the vehicle separated, which is when the driver lost control of the truck and it slid sideways into the center median, striking a drainage culvert.

When the Ford struck the culvert, Snyder was ejected out of the driver’s side window and landed in the dirt shoulder of the westbound lanes. He was transported to the hospital in critical condition and was pronounced dead the following afternoon

The affadavit states that through the course of the accident reconstruction by the Major Crash Investigation Team, it was determined that the damage to the vehicle supports the position that as the pickup struck the concrete culvert, “the airbags should have deployed, however, they did not.”

“There is indication of safety issues with the Ford that resulted in the crash and subsequent death of the driver,” the investigator noted in the affidavit.

Following the crash, the pickup was being stored at a towing yard in Hurricane and was inaccessible to the accident reconstruction team, so a warrant was granted that provided the investigation team with access to the pickup to further the investigation.

Troopers were able to take physical measurements and photos of the truck’s exterior utilizing the agency’s 3-D laser scanner and photogrammetry, an application that processes photos of an accident scene to build 3-D models of the area to extract key measurements. Investigators also needed access to obtain safety inspection information on the brakes, tires, suspension, lighting, switches, steering and other related equipment.

The affidavit also states the incident is being investigated as a possible negligent homicide case that is ongoing, and no further details have been released at this time.

Cody Blowers was raised in South San Francisco, California. A 2013 graduate of Colorado Technical University, Cody earned her bachelor’s degree in criminal justice with a minor in paralegal studies. Through the course of her academic studies she discovered that writing is her true passion, and she is committed to providing credible, integrated news coverage. Cody joined St. George News in 2015, and when she’s not busy chasing the news, she can generally be found chasing her young granddaughter, Kali.