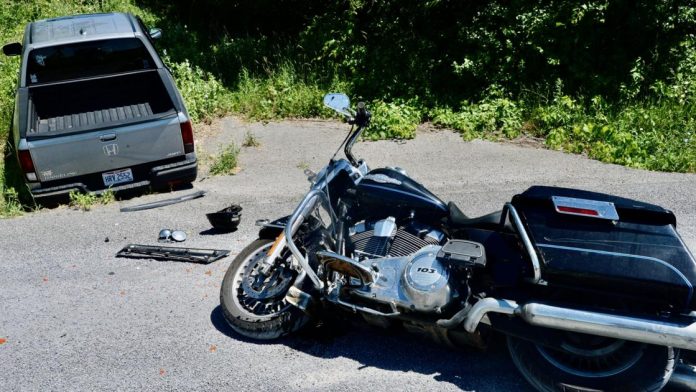 STAFFORD — An Allegany County man was killed when his motorcycle collided with a pickup truck Friday morning on Bethany Center Rd.

The accident occurred about 11:06 a.m. between Batavia-Bethany Townline Road and Ellicott Street Road. The driver of the motorcycle, Donald M. Bernard lost consciousness at the time of the crash and was later pronounced dead at the scene by the coroner after minutes of CPR.

According to Genesee County Sheriffs’ Chief Deputy Brian Frieday, Bernard’s motorcycle was northbound on Bethany Center Road. The pickup was southbound before attempting to turn left into a driveway in order to turn around.

The pickup crossed in front of the oncoming motorcycle in the process. Bernard attempted to brake when he saw the pickup, but wound up colliding with the truck on the passenger side.

Bernard was driving a 2012 Harley Davidson motorcycle, while the driver of the truck, Joseph C. Johnson, 62, of Warren, Ohio, was operating a 2019 Honda pickup truck and escaped injury. Johnson was in the area due to business, as he was part of a crew doing line work in the area of Bethany Center Road.

A couple of factors which Frieday said may have played into the crash was the fact that the road had recently been lined with gravel and oiled for maintenance, along with the fact that the truck had attempted to make the turnaround in a precarious location, at the base of a small hill where it would be difficult for oncoming traffic to see.

An investigation by the Genesee County Sheriff’s Office is continuing. The Town of Batavia Fire and Mercy EMS assisted at the scene.