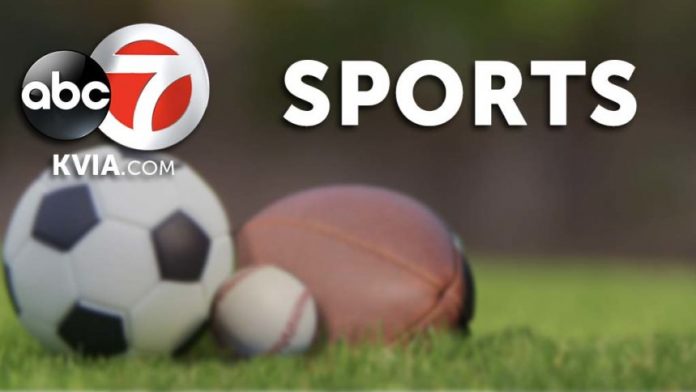 Jason Day asks to be tested

UNDATED (AP) — Jason Day has asked to be tested for COVID-19 just before the third round of the Travelers Championship in Connecticut. Officials have decided to have him play as a single Saturday as a precautionary measure.

Two more players withdrew Friday because of the coronavirus, Denny McCarthy for a positive test, and Bud Cauley, who tested negative but decided to pull out after playing alongside McCarthy on Thursday.

In all there have been seven COVID-19-related withdrawals from the tournament.

In other developments related to the COVID-19 pandemic:

— Cleveland Indians president Chris Antonetti said a “couple” of staff members have chosen not to take part in the resumption of training camp due to COVID-19 concerns. Speaking on a Zoom call Friday, Antonetti did not identify the staffers who have opted out or specify their roles in the organization. He added that he’s unaware of any players declining to participate because of health reasons. Antonetti said the club has spoken to “every high-risk individual” about the risks of returning. The Indians are scheduled to reopen camp on July 1 in Cleveland.

— Morehouse College has canceled its football and cross-country seasons because of the coronavirus pandemic. President David A. Thomas said scholarships would be honored. The Historically Black College in Atlanta competes at the NCAA Division II in the Southern Intercollegiate Athletic Conference. In a statement on the school’s website, Thomas wrote about the difficulty in safely travelling and hosting games and events while maintaining social distancing.

— French soccer club Paris Saint-Germain says three players from its women’s teams have tested positive for the coronavirus. PSG said in a statement Saturday that one player from the main women’s team and two players from the under-19 side returned positive results. The women’s senior team is set to resume training on Monday. Earlier this week, PSG said three players from the men’s side and one member of staff were infected by the virus during the lockdown when they were not in contact with each other. PSG said they are no longer contagious and can train as normal.

LONG POND, Pa. (AP) — NASCAR is set for a tripleheader of racing at Pocono Raceway from three national series on Sunday.

The Cup Series race scheduled for Saturday is still on with a green flag start time of 3:54 p.m. Eastern.

Sunday’s Cup race comes with a twist. The field will be set by inverting the lead-lap finishers from race No. 1.

UNDATED (AP) — Presumptive top selection Alexis Lafreniere will have to wait a little bit longer to find out his NHL destination. Chaos reigned at the NHL draft lottery, with the No. 1 pick still up for grabs in a second lottery drawing.

The eight teams that lose in the qualifying round of the playoffs have an equal chance of drafting first. The Kings got the second pick, the Senators the third thanks to 2018 trade with San Jose and the league-worst Red Wings dropped to fourth. Ottawa has the third and fifth picks and is the first team since 2000 with two selections in the top five.

As part of the NHL’s 24-team playoff format if it resumes, 16 teams will play each other in best-of-five series to move on — and the losers of those matchups now have a major consolation prize looming: equal 12.5% odds of landing Lafreniere.

Hamilton, a six-time world champion and the only Black driver in F1, was shocked by Ecclestone’s claim during an interview with broadcaster CNN on Friday that “in lots of cases, Black people are more racist” than white people.

On Instagram, Hamilton called the comments “sad and disappointing” and said they “show us how far we as a society need to go before real equality can happen.”

Ecclestone made his assertion when he was asked his opinion on Hamilton setting up a commission to increase diversity in motorsport.

The 28-year-old player was detained this week at the airport in Key West, Florida, by a Monroe County sheriff deputy. The Miami Herald reported he was found sleeping behind a Federal Express building at the airport and refused to move.

Jail records show Toles appeared to be homeless when arrested Monday on the misdemeanor charge. His bond was set at $500 but he remained jailed and is scheduled for arraignment Thursday.

Toles rose from the low minors to the majors in just months and became a postseason star for the Dodgers in 2016. He was the starting left fielder in the second half of 2016 and early in 2017. In May of that year, he tore a knee ligament and spent most of 2018 at Triple-A Oklahoma City.

The team said Toles never reported to spring training camp in 2019 because of a personal matter. He did not play that year.

Covid-19 pandemic shines a light on a new kind of class...