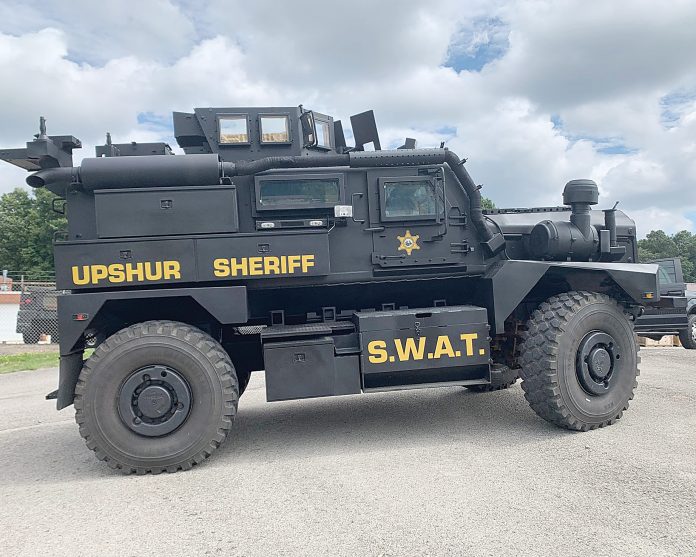 BUCKHANNON — The Upshur County Sheriff’s Department has a new vehicle in its fleet — a Mine-Resistant Ambush Protected light tactical vehicle — received from the federal government.

Sheriff David Coffman said the sheriff’s department learned of the opportunity and decided to apply as it was looking to replace it’s 41-year-old SWAT vehicle.

“I received an email from the federal government advising me that they had these surplus military vehicles they were offering to law enforcement agencies across the country,” he said.

“I didn’t really think much of it or have much hope,” Coffman said. “I had been thinking at the time how we were going to replace our current SWAT vehicle — a 1979 model that was on its last legs.”

Chief Deputy Mike Kelley heads up the Upshur County Sheriff’s Department SWAT team and Coffman had him follow up.

“About six months went by and then we received an email saying our request had been approved and this vehicle was available to the Upshur County Sheriff’s Department,” he said. “We went to South Carolina and got it and brought it back to Buckhannon.”

After acquiring the MRAP this summer, sheriff’s department painted over the Army brown with black paint and the lettering and decals were donated.

Coffman said the sheriff’s department will be stocking the MRAP and the SWAT team will begin training with their new vehicle.

The now-retired 1979 truck will be sold by the county at a later date.

The new unit will haul eight people plus gear should an emergency require the SWAT team to be activated.

“We do not use SWAT very often,” Coffman said. “There have been two or three times since I have been sheriff where the SWAT team was called out for different situations. This is just a resource that is there. It will be available for years.”

The sheriff said he wanted the public to know that no tax dollars paid for sheriff’s department to acquire the MRAP.

“Some people may not understand why a sheriff’s department like us need such a unit,” he said. “The world is changing and we hope we never have to use it, but it’s a resource that is available to us immediately if we need it.”

Just like now, Coffman said the SWAT team and the new MRAP will be available to assist other agencies.

The Defense Logistics Agency Law Enforcement Support Office transfers excess Department of Defense property to federal, state and local law enforcement agencies within the United States and its territories, according to its website.

The Moundsville Police Department also received an MRAP this year.

Indian Auto Manufacturers That Shine With a Global Footprint

City and state leaders across US declaring states of emergency