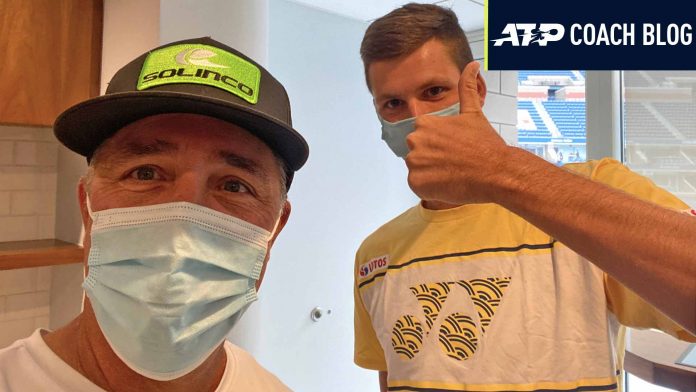 I hope everyone enjoyed the first day of the US Open!

My name is Craig Boynton and I coach Hubert Hurkacz from Poland. I thought it would be nice to share our experiences so far in the bubble during the first two tournaments since the ATP Tour was suspended in March.

The first question you might have is what is it like to stay in the bubble? Interestingly enough, Hubi stayed in a hotel room in Florida during the pandemic for four straight months to train with me. The same exact hotel room! If he was able to do that, this is a walk in the park for him.

Hubi’s attitude about staying positive during this stretch and looking at things in the right light is really not an issue. He’s good with that. I never need to have that conversation with him because he’s so professional.

John Millman: Life Inside The US Open Bubble

When we got to New York, it was so terrific to see the guys again. We’ve missed the different faces and getting to practise and compete against different types of players. It was like we were kids in a candy store. Everyone was eager to train and everyone was excited to play. It just felt normal again.

In a funny way, it got to be like Groundhog Day. I started to have no clue what day it was! The USTA set up buses to go back and forth from the USTA Billie Jean King National Tennis Center to the hotel on Long Island. You hop on a bus, you go to the courts and you go back to the hotel. Day after day it’s the same thing. I just knew what time Hubi was hitting and whom he was training with.

Of course we can’t leave the bubble, so there’s no sense in bringing nice clothes to go out! Usually during the US Open everyone loves spending time in Manhattan, but that’s okay. It is what it is. I told Hubi yesterday before he played his match that the bubble has actually been fun. Hopefully we’ll never have to deal with this again, but we’re trying to make the best of it and I think we’ll look back at this and cherish the bubble time because it’s been so different.

One thing that’s been a little strange is that there are no fans, so you can walk the grounds. There is virtually nobody around. It’s empty compared to what it would be like with the full complement of fans. We’ve been here for a couple weeks and we’ve been able to get used to that. But it’s still weird when you look around by the big scoreboard outside Arthur Ashe Stadium and there’s nobody around. Usually you have to fight to get through the huge crowds to get back to the locker room. It’s always shoulder to shoulder. Not this year.

Photo Credit: Jennifer Pottheiser
Something that is pretty cool is that since Hubi is fortunate enough to be seeded in the US Open, he was allocated one of the luxury suites inside Arthur Ashe Stadium as his own private locker room. Not bad! What they’re trying to do is spread players out and make sure they’re socially distant.

There’s nobody here, so you can basically eat anywhere on the grounds. They’ve done a really good job with scanners where you scan the barcode, the menu comes up and they know exactly where you’re ordering from so they deliver it right to you.

The biggest difference for us coaches is that we are not allowed in the locker room. But since Hubi has the suite, it’s perfect. It’s especially nice to have that private space to hang out before a match, have our pre-game talk and relax. We have two TVs, put two matches on and just waited in the suite until it was time to play. Yesterday we had Jordan Thompson’s match on because Hubi followed him and then I was watching Alejandro Davidovich Fokina and Dennis Novak, because I knew the winner would play Hubi if he advanced.

The way you organise practice is different, too. You call the line and they actually have people in Orlando book it and there are a couple guys here to help if needed. They have a designated spot on site right near Court 6 where you go to pick up the balls.

Yesterday we did the warm-up before the warm-up at the outdoor gym area they set up. We did our normal pre-match hit and then went back to the suite. Right before the match, we propped open the suite door and Hubi went out in the corridor and jumped rope and did some sprints in the tunnel of Arthur Ashe Stadium just to get loose and get moving. Players definitely can’t do that under normal circumstances!

When it was time for Hubi’s match, I actually didn’t know where he was supposed to go. Normally they’d just call him from the locker room and we would go from there. It was an interesting five minutes because I knew the match before him had finished but nobody was calling for him, so we just eventually worked our way down to the courts and they were waiting for him there. 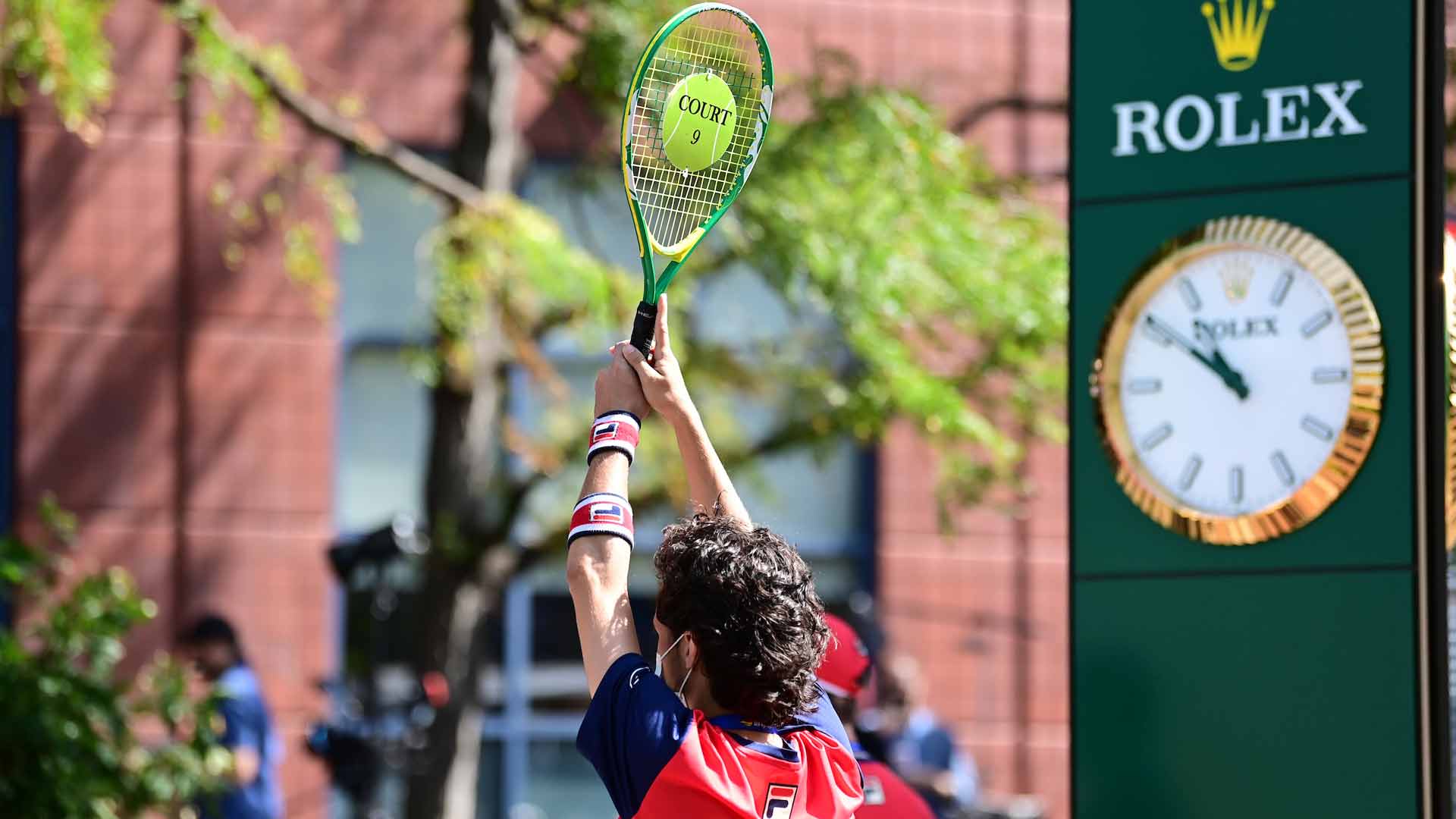 A ballperson waits to escort players to their match court during last week’s Western & Southern Open. Photo Credit: Ben Solomon
Hubi played on Court 6, which is right next to the stadium. When we got down there, the court runner was holding a racquet with the court number to show us he was the escort. Court 6 was literally 30 feet behind him, so that was pretty funny.

Hubi played a German named Peter Gojowczyk. At the very beginning it was almost very sterile, very quiet. A lot of the more popular players like Diego Schwartzman from Argentina, who was on the next court, always have a really raucous crowd where players can use energy from the crowd to get them over the line. That’s not there anymore, so I think some players are realising how important the fans are not just to tennis, but their individual success. You can hear conversations on the court, you can hear a lot of things you never usually would.

But what’s important is to recognise that this is what the reality is. To speak in any other terms is a waste of energy. We know what the situation is. We have a plan. Hubi plays prepared, he knows what to do in situations, he knows what he can do better and when. That’s really all that matters: his ability to self correct, his ability to adjust.

Gojo hits the ball really flat. He’s very aggressive and a lot of points were on Gojo’s racquet. If you play passively, you’re going to find yourself on your heels a lot with him. Hubi did a really nice job of managing the match, being able to absorb the pressure and pace. In the games Hubi broke, Hubi played well. It was nice to get out of there in straight sets, no doubt. 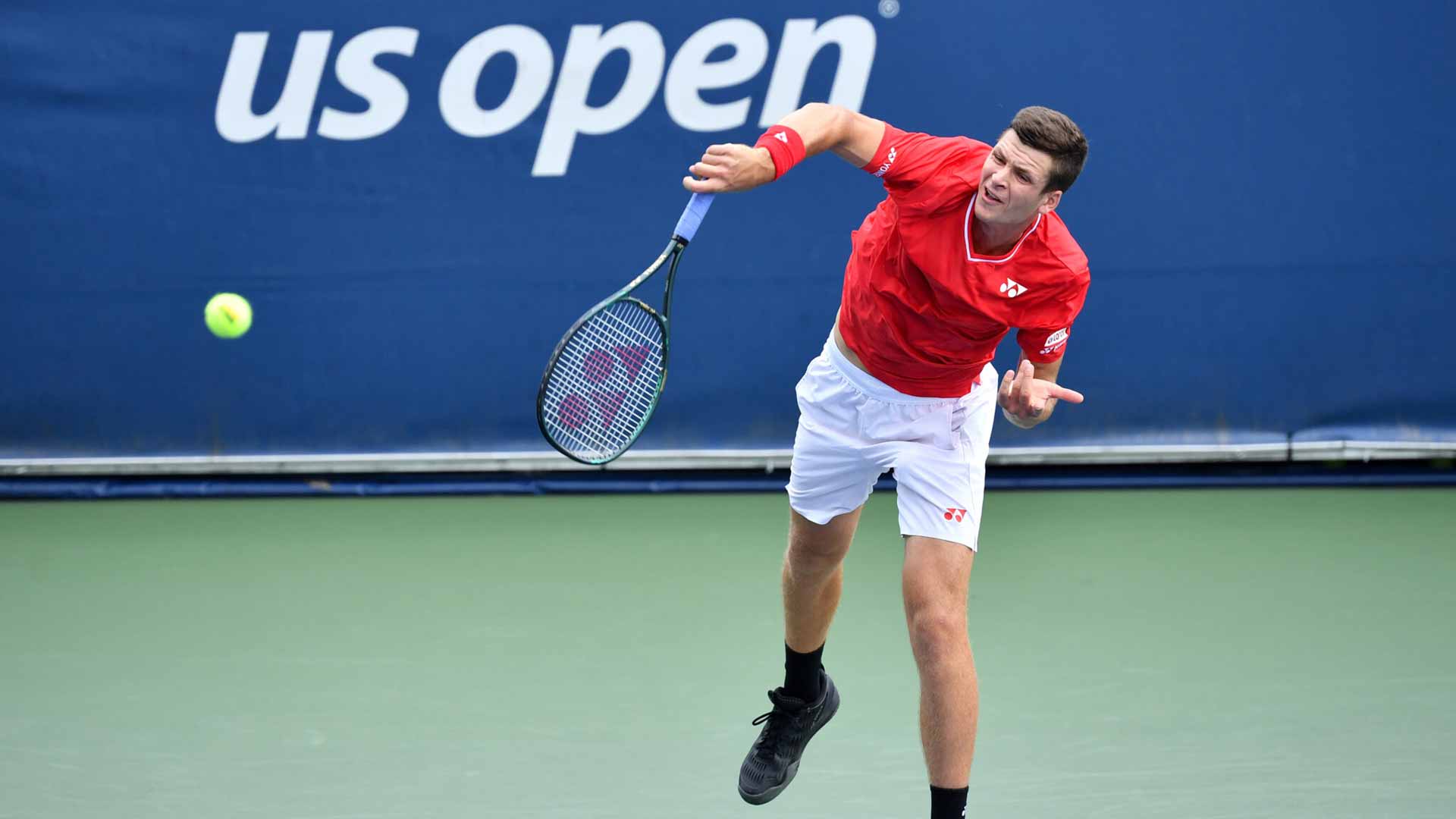 Hubert Hurkacz” />
Photo Credit: Peter Staples/USTA
There’s not much special once we head back to the hotel because we can’t go anywhere, but the organisers have done a great job trying their best to make things interesting for us. Every night there’s a food truck that comes out and gives complimentary food. They’ve also got a game room set up with ping pong, pop-a-shot basketball, pinball and more.

They have trivia every other night. They’ve got a big screen in a courtyard area where you can watch the NBA. They had a movie night. They’re doing a lot of good things and trying to keep it as fresh as possible. You have to be safe and distant, but you also have to live life. It can be really boring like Groundhog Day if you have nothing to do at the hotel.

They’ve certainly done a bang-up job. When I look back at this I’ll have fond memories of the bubble. I hope everyone reading this has enjoyed the tennis, too. Wish Hubi luck!