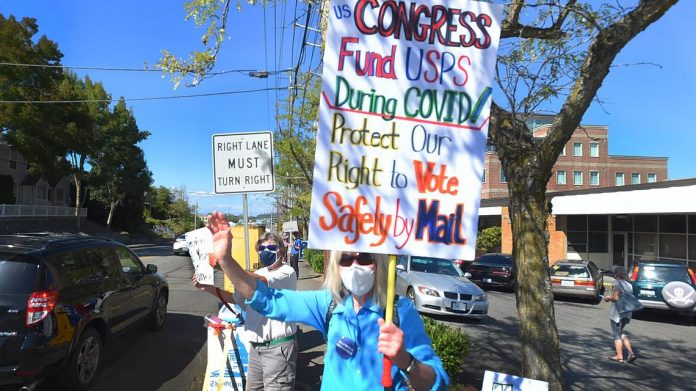 A federal judge has ordered the U.S. Postal Service to detail the number of mail-sorting machines and blue collection boxes that it slated for removal and provide other information about its recent changes to delivery in the run-up to a presidential election that will depend heavily on voting by mail.

The lawsuit alleges that recent changes and reductions by the Postal Service — which have come while President Donald Trump routinely disparaged vote by mail — would delay the delivery of ballots and disenfranchise voters. Oregon and Colorado, two other states that along with Washington vote by mail, are part of the lawsuit.

Bastian’s order requires the Trump administration to provide specifics in 10 days about the extent of its changes critics say could hurt mail balloting as Americans cast votes during a global pandemic.

That information sought by the states includes the number of blue collection boxes and mail-sorting or processing machines that were slated for removal in recent months, and whether they will be reinstalled before the Nov. 3 election.

Among other things, the states want to know whether the U.S. Postal Service (USPS) will postmark election mail as First Class to ensure delivery by election deadlines. And they’re seeking information on key USPS policy changes, such as new overtime rules, potentially limiting post office hours and restrictions on late delivery trips by postal trucks, which could delay mail.

“I think everybody in this country is relying on the Postal Service to do their job,” Bastian said in a court hearing held remotely Thursday afternoon.

“So I hope at some point we will be hearing from the Postal Service not a bunch of procedural arguments or jurisdictional arguments, but some assurance to the American public that the Postal Service is up to the challenge of delivering ballots to the voters and back to the states so they can be appropriately counted,” he added.

With the Nov. 3 elections just 10 weeks away, Bastian suggested the next hearing come in mid-September, saying “time is of the essence in this case.”

At the same time Ferguson announced his lawsuit last week, U.S. Postmaster General Louis DeJoy — who is being sued along with Trump and the U.S. Postal Service — released a statement saying he would suspend some of the changes.

But in recent weeks, the Postal Service has refused to give details about its changes to Washington. Those changes included disabling mail-processing machines, trying to halt outbound mail distribution in three of Washington’s five facilities — and restrictions on overtime for mail carriers.

The changes have come as Trump has repeatedly denounced mail-voting and sought to cast doubt on the coming election’s results as he lags in the polls.

Speaking before a U.S. Senate Committee last week, DeJoy told lawmakers that his agency was “fully capable and committed to delivering the nation’s election mail securely and on time.”

But the postmaster general also said he didn’t have plans to bring back some agency cuts enacted since in June — including a policy that restricts late delivery trips made by letter carriers.

Requiring delivery trucks go out on schedule, rather than waiting in some cases could result in ballots being left behind for another day, state Assistant Attorney General Kristin Beneski said during the hearing.

Beneski cited a news report from earlier this week that empty postal truck drivers in Tennessee were apparently being forced to drive without any mail to their scheduled destination in Illinois.

The lack of public information about policies — as well as the status of mail-handling equipment that had been slated for removal in Washington — also raised questions about if or how the new changes differed from facility to facility and region to region.

“That would mean postal employees around the country are just as confused as the rest of us,” she said, about how to handle election mail.

During the hearing, an attorney for the Trump administration said DeJoy had already answered such questions in his recent appearances before Congress, and that additional information might come out in future appearances.

U.S. Department of Justice attorney Joseph Borson argued, among other things, that the court didn’t have jurisdiction over the types of allegations made by the states.

Borson argued it would be too difficult to provide the Postal Service’s policies and details on changes, saying, “the mechanical exercise of gathering all of these and processing them … would be burdensome.”

Self-Care in the Time of a Pandemic: One Editor’s Story, Part...