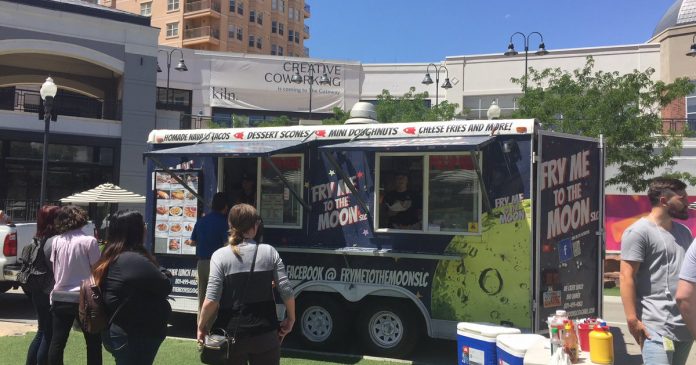 These days William Starks, owner of Fry Me to the Moon, can usually be found talking on his cellphone, driving to the suburbs to find new customers or searching for a parking spot.

His gourmet fried food trucks continue to give a free mini donut to customers — as they did before the pandemic. But over the past six months, the mobile food business has changed.

“You have to be proactive,” said Starks, who started Moonstruck, a new catering business that offers family meals to go.

That kept his three trucks afloat until The Food Truck League launched “takeout nights” in suburban communities along the Wasatch Front. These community events are held on weeknights from Bountiful to Spanish Fork and allow families to still enjoy the food truck experience while maintaining social distance requirements.

Starks said catering will be the backup plan for winter when mobile dining typically slows down in Utah.

When large events were canceled this year and Utahns started working from home to prevent the spread of COVID-19, owners of mobile food businesses started focusing on one thing: surviving 2020.

“It’s been brutal,” said Taylor Harris, general manager of the League, a collective with more than 300 members. Just as the outside temperatures were starting to rise — usually the busiest season for trucks — sales dropped 90%.

Those numbers have gone up in recent months, as health regulations have relaxed. Yet they’re still half of what they were last year, said Harris, and aren’t good enough to make a complete recovery in 2020.

But food trucks have learned to pivot. These smaller events in the suburbs are the new reality and have replaced the large festivals, football games and busy lunches at downtown office buildings that were once the mainstay for food trucks.

Harris pointed to research that showed trucks are some of the safest dining establishments. They have few employees handling food, their system only allows customers to pick up food from a window and they are usually outdoors, where customers can keep an appropriate distance.

“Utah has one of the best food truck scenes in the country,” said Harris. “I’m hoping we can keep our diverse food culture thriving after COVID. We are working to survive for next year.”

For Bruges, a truck that sells Belgian waffles and fries, these smaller events have kept the business afloat.

When the virus hit, private events were canceled or reduced. A 200-person wedding turned into a 50-person party and office lunches disappeared.

“That was a big scare, as it was still winter, and there were no evening roundups going on,” said Hade Bosteels, co-owner of Bruges.

Unusual parking lots have been saviors. A tire store has allowed them to park in their lot, bringing in potential customers. A homeowners association also has invited them to sell at their condominium complex.

A new online ordering system also made it possible to keep residents who wanted to reduce the amount of time they spent outside with others as much as possible.

Bruges also has been able to survive because the owners haven’t paid themselves a salary since February and have removed some menu items to cut costs.

“We are all living off our savings,” Bosteels said, “and luckily I was able to find a job that gives me some income.”

For El Nene Sammy, a truck that makes tacos with an “Argentine twist,” survival during the quarantine meant abandoning his usual spot in downtown Salt Lake City, which was nearly empty as employees stayed home to work.

Sales went down around 40% compared to last summer, said Hector López, who found that the best spots were in the suburbs: Layton, Morgan and Ogden.

Devoted fans — accumulated since its launch three years ago — also have helped. One customer allowed the truck to park at his office building in Mountain Green, López said.

“People kept coming and calling to see what they could do to help us stay open,” he said.