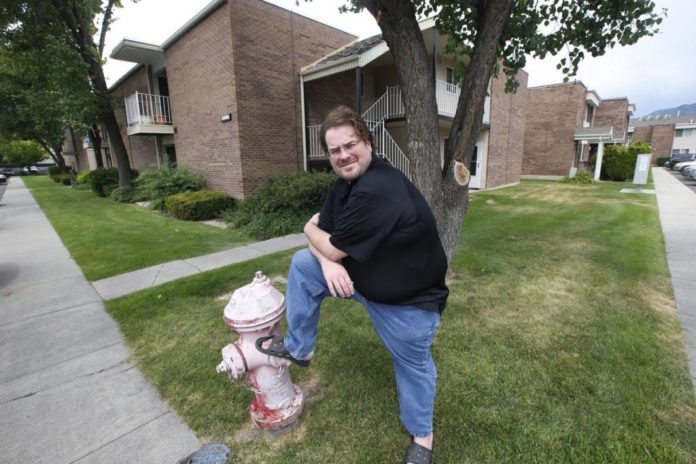 Christian Haskins, 37, is shown at his home Thursday, July 23, 2020, in Millcreek, Utah. Federal unemployment aid that has helped avert financial ruin for millions of Americans is expiring in Utah and elsewhere on Saturday, July 25, 2020, leaving many residents unsure of how they’ll pay their bills as the number of new COVID-19 cases continue to rise. He was laid off from his job as a labor coordinator for live events in July. Without the $600-a-week federal enhancement to his unemployment, he’ll be barely scraping by and he’s scared of what could happen if he has a costly emergency. (AP Photo/Rick Bowmer)

SALT LAKE CITY (AP) — Federal unemployment aid that has helped avert financial ruin for millions of Americans is expiring in Utah and elsewhere on Saturday, leaving many residents unsure of how they’ll pay their bills as the number of new confirmed COVID-19 cases continue to rise.

Since early in the pandemic, the federal government has added $600 to the weekly unemployment checks that states send, but with the program set to end many are left wondering how they’ll make ends meet.

New unemployment claims in Utah have dropped overall as the state economy reopens, but they’re still significantly higher than a year earlier. Some jobs haven’t come back. Tens of thousands live-events workers remain in a stomach-churning limbo, having little idea when it might be safe to hold the gatherings their jobs are built around.

Christian Haskins of Salt Lake City had been thinking about replacing his 20-year-old truck, but now he’s just hoping it doesn’t break down since he couldn’t afford repairs. At 37, he’s considering moving back in with his parents to save money.

He works in the live-events industry as a labor coordinator, and was laid off earlier this month after another federal-aid program for small businesses ran out for his employer. Depending on state unemployment alone is a drastic income drop from the middle-class career he’d built for himself, and with concerts and shows still shuttered indefinitely he doesn’t know when he might be able to return to his job.

“It’s barely surviving. It’s just having enough to pay for the mortgage, food, health insurance,” he said. “If I get into a car accident or my condo bathtub springs a leak, some sort of accident happens … it’s a ton of money out of pocket.”

Audio engineer Steve Waldram took a drastic pay cut to become a delivery driver to make ends meet after he was laid off. He just bought a house a year ago, and is hoping he’ll be able to keep it.

“I worked so hard for the last 12 years to get here, and now it’s ripped out from underneath me,” he said.

Sophia Eppolito is a corps member for the Associated Press/Report for America Statehouse News Initiative. Report for America is a nonprofit national service program that places journalists in local newsrooms to report on undercovered issues.

Council votes 4-2 to put Spears on Utility Board