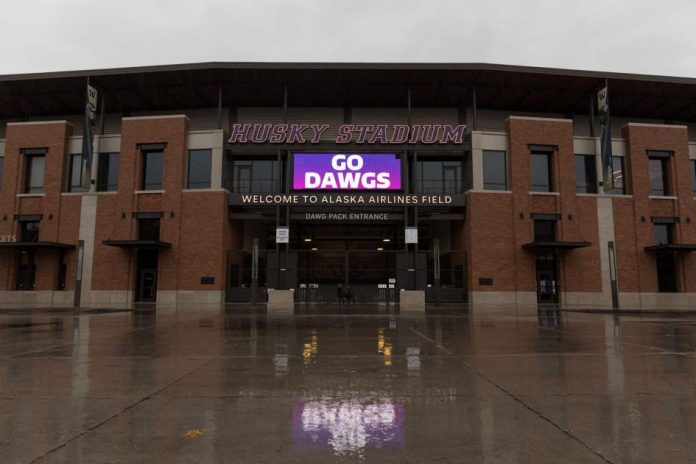 A Washington football recruit is among a group of six high schoolers accused of sexual assault in 2018, according to the Seattle Times.

The players, five of whom went to Eastside Catholic High School in Sammamish, reportedly were drinking with the alleged victim in a pickup truck when four of them sexually assaulted her. The two others were in the cabin of the truck and witnessed the event. Further interviews with students revealed that the event had been filmed on Snapchat and sent to several people.

Following an investigation led by the Clyde Hill Police Department, the King County Prosecutor’s office declined to press criminal charges due to insufficient evidence to support a case.

The four players in the truck bed acknowledged having sex with the victim but claimed it was consensual. The two in the cabin did not participate in the sexual encounter.

The police investigation seized several phones, but could not recover the video. According to King County Prosecuting Attorney Dan Satterberg, the combination of the players claiming consent and the lack of video evidence wasn’t enough to provide a “lack of consent” by the victim.

At least one of the players, who identified himself as one of the two in the truck cabin, has lost his scholarship. Four-star cornerback Ayden Hector confirmed in a statement on Twitter that he had been revoked by Stanford University and that he was a witness. Hector, who also had a UW offer, had his scholarship pulled after Stanford filed a records request after being tipped off by an anonymous source in February.

As of April 18, the UW had not requested any records. In a statement to the Seattle Times, assistant athletic director Jay Hilbrands said the university is restricted by state laws that limit the inquiries the school can make about a student applicant’s past with the criminal justice system. He also added “Federal law protects records related to students once admitted to the University.”

The victim hasn’t spoken to the media at this time but in a statement given March 10, she said she is still traumatised by the events that transpired that night.

Following that night, I was partially hospitalized for a period of months and diagnosed with Post Traumatic Stress Disorder,” she said. “I have been bullied in person and online, and I dropped out of my high school and now take classes at another school.”

Earlier this week, KING-TV released a two-part series about the case and the decision not to prosecute.