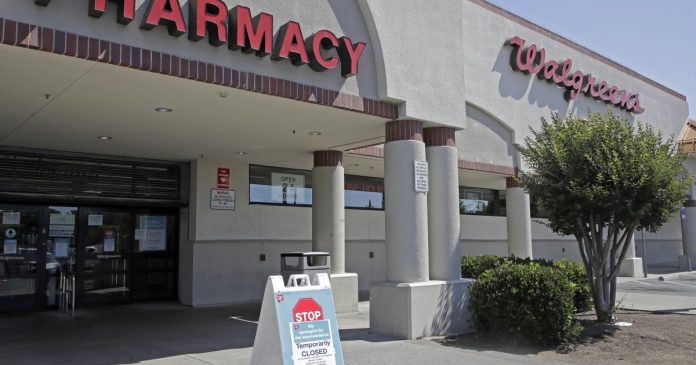 Vallejo police revealed Wednesday that an officer-involved shooting a day earlier had resulted in the death of a 22-year-old Latino man, a suspected robber who had a hammer in his waistband amid a chaotic night of looting.

The man, identified as Sean Monterrosa, was killed outside a Walgreens store by a Vallejo officer, whom police chief Shawny Williams declined to name, describing only as a veteran of the force.

The shooting death could further inflame tensions in Vallejo, a city of 121,000 in the north bay region of the San Francisco Bay where there has been both peaceful protests and clashes with authorities.

In a Wednesday press conference, Williams said police were first called to the Walgreens at about 10:17 on Monday night, but received a second call about possible looting of the pharmacy around 12:15 on Tuesday morning.

A responding cruiser arrived minutes later to see about a dozen suspected looters in the parking lot, loading into a silver pickup truck and a black sedan. Williams said that as the vehicles fled the lot, the black sedan hit appeared to ram the cruiser, deploying its airbag and injuring the officer.

A second responding unit that Williams described as unmarked but with two uniformed officers, also responded to the scene and noticed a “male dressed in black” running toward the black sedan.

Williams said officers observed the man, Monterrosa, kneel down and raise his hands to his chest level “revealing what appeared to be the butt of a handgun.”

Later investigation revealed it was a 15-inch hammer tucked into the pocket of his sweatshirt, said Williams.

Williams said one officer in the unmarked vehicle “perceived a threat” and fired five shots through the windshield, striking Monterossa once.

Monterossa was transported to a hospital, where he later died, said Williams. Williams said that some elite officers are trained to shoot through windshields and that it is allowed in department policy.

Civil rights attorney John Burris, who has been retained by the family, said he disputed that Monterossa posed a threat.

“It’s a pretty outrageous shooting,” said Burris Wednesday. “The officer’s life was not in danger.”

Burris said that he believes Monterossa was in the process of surrender, and that “there was a reckless disregard for this kid’s life because there was tension in the air.”

“It appears that Shawn Monterossa had essentially surrendered,” said Burris. “He went down voluntarily to his knees and was in the process of putting his hands up when the officer saw what he said appeared to be a gun and shot him. The officer was not out of the car, Shawn was not chasing him, not threatening him.”

“Looting is not a justification for the use of deadly force,” he added. “It’s just property.”

Burris said that Monterossa was a resident of San Francisco and the middle child of two immigrants, one from Puerto Rico and one from Guatemala. Monterossa was studying to be a cement mason and a carpenter and had previous run-ins with the law. Burris said Monterossa had never been convicted of a crime.

Burris has sued Vallejo and other cities several times over police shootings.

The department is also coming under scrutiny for its timing of the announcement of the fatal shooting — more than 24 hours after it happened.

The Vallejo police had previously announced Tuesday there had been an officer-involved shooting, but did not disclose that the shooting victim had died and the Solano County DA’s office had announced previously it was investigating the shooting.

Williams said that the department did not purposefully delay news of the officer-involved fatality because of violent protests in the city, but he acknowledged that Monday had been a “horrific night” for the department and an “orchestrated, organized assault on our city.”

Tuesday, the National Guard was deployed in Vallejo.

Assemblymember Tim Grayson (D-Concord), was one of those raising questions about the delay in information.

“I was shaken to learn that Sean Monterrosa, the man who was shot by officers, died. Regardless of circumstances, it is absolutely unacceptable that the public was forced to wait for over 24 hours to learn of the conditions of those involved in the shooting.”

The shooting death county further inflame tensions in Vallejo, a city of 121,000 in the north bay region of the San Francisco Bay.

Williams said that the officer involved had 18 years of experience. Asked several times at a news conference if the officer had used excessive force, Williams declined to answer, saying the district attorney “will make the ultimate finding if the force was legal.”

That was not good enough for Grayson.

“I believe an independent investigation into the officer-involved shooting that occurred Tuesday must be conducted by the California Attorney General’s office or a federal agency,” the assemblyman said. “The family of Sean Monterrosa and our community in Vallejo deserve to have clear information about the events that occurred and the response from the Vallejo Police Department.”