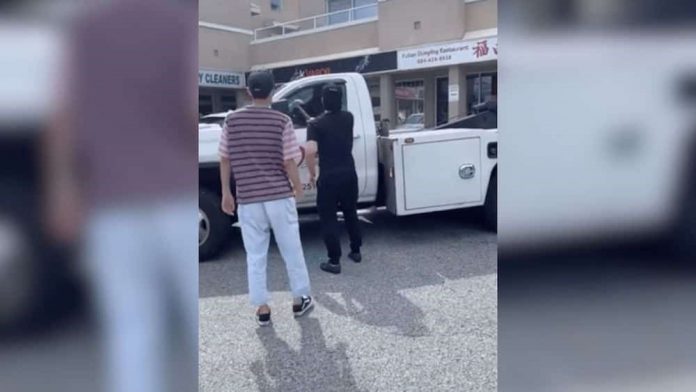 The man smashed the tow truck driver’s window with a hammer and yelled at him and tells him to, “come here.”

The owner of a Vancouver bubble tea shop has issued a statement regarding a violent incident that involved one of its store managers and a tow truck driver.

On July 13, Vancouver Police responded to a report of a man who smashed the window of a Drake Towing vehicle. Cst. Tania Visintin tells Vancouver Is Awesome in an email that police responded to the call just after 11 a.m. in a parking lot at 3490 Kingsway Avenue.

“The suspect was having his car towed from the parking lot when he approached the tow truck and smashed the driver’s side window with a hammer,” writes Visintin.

Once police arrived, the suspect was arrested and taken to jail. No one was injured.

In an email to V.I.A. on July 17, the owners of Jenjudan Kingsway write that one of their store managers engaged, “in behaviour that was unacceptable in an incident regarding a tow truck driver.”

The owners add that the initial dispute led to a series of “alarming events” that started with the towing of a vehicle off of the establishment’s property.

“We want the community to know that Jenjudan does not condone any behaviour of this kind, ever, and that we are deeply surprised and disappointed to see this happen,” writes Jenjudan. “We also want to extend our thoughts and sincere apologies to the tow truck driver in this situation and want to express our sincere apology.”

Although the incident took place off of company property, the owners say that they have suspended the store manager and advised him to seek professional help. They are also conducting a review of their company training program to ensure that incidents like this do not occur in the future.

A video of the incident has also been shared on Reddit. In it, a man argues with the driver of a Drake Towing vehicle who appears to be towing his car.

Your Daily Recap of Our Top Stories