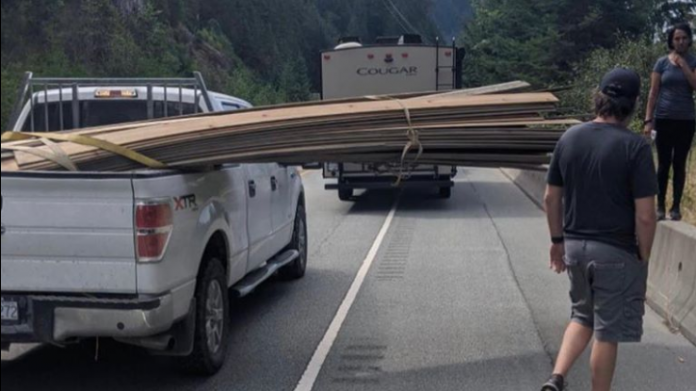 SQUAMISH (NEWS 1130) – A Vancouver cyclist is recovering from several broken bones and other injuries after he was hit by a truck carrying an overhanging load of wooden planks on the Sea to Sky.

Amateur athlete and running blogger Todd Nickel was riding from the downtown Vancouver area on Monday morning, making it as far as Furry Creek before he was hit from behind.

Images of the vehicle show the planks hanging about two metres outside of the pickup truck’s box and into the shoulder and bike lane. It’s unclear if the wood was loaded into the truck like that or if the planks had shifted.

Nickel says he was taken to Lions Gate Hospital in North Vancouver where he was assessed for a broken clavicle, scapula, and eight broken ribs. He says he also has a punctured lung.

“This hit me from behind going 80 km/h,” he writes in a tweet featuring an image of the pickup with the overhanging load.

“Lots of busted stuff but it could have been a lot worse. Happy to be alive and mad as hell,” Nickel writes on Facebook.

Went chasing my first century today but it went a bit, ahem, sideways..Lots of busted stuff but it could have been a…

The Squamish RCMP has released few details about the crash, only saying on social media on Monday that a cyclist was hit on the Sea to Sky around 11:54 a.m. Monday.

NEWS 1130 has reached out to Mounties for more information.

The global market for Tires is forecast to reach 2. 7...

Man jailed after ‘deceased person’ run over in Newton County