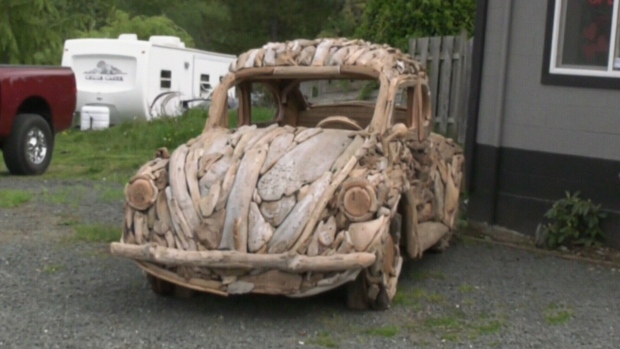 QUADRA ISLAND, B.C. —
A Vancouver Island artist who’s gained a popular following through his work creating driftwood sculptures has just completed another one that’s sure to be a crowd-pleaser.

Alex Witcombe of Drifted Creations spent the past year working on a full-sized replica of a Volkswagen Beetle.

“This is definitely the most complicated,” Witcombe says. “I needed to make a sub-structure that will stand up to moving around and will actually hold all the driftwood.”

It was also complicated because the doors of the vehicle open so people can interact with the sculpture.

“Just don’t wrench on the steering wheel too hard, it doesn’t turn,” he says. “Don’t do the gear shift, you break it you buy it.”

The idea for the project originated because Witcombe needed a replacement truck and trailer for his business. He struck a deal with Black Creek Motors where the Beetle is now on display.

Measurements for the replica came from a Beetle owned by Lisa Sorensen of Quadra Island, which is where Witcombe constructed the project. Sorensen calls her vehicle “Wanda.”

“He did a great job, it’s pretty close,” Sorensen says. “It feels just like sitting in Wanda, other than it’s wood, not metal.”

When the driftwood Beetle was transported off of Quadra Island on the back of a flat-deck truck owned by Mark Richmond of Road Kill Recovery, the truck was immediately surrounded by people trying to get a photo of the bug.

“The flock as soon as I pulled up was amazing,” Richmond says. “It’s an amazing piece right from all the driftwood that he used, right to the used plywood interior.”

As fun as the project is, there is also a serious side to it, Witcombe named the Beetle “Edward” after his father who died recently after being in hospital for six weeks and then two weeks in palliative care.

His father died before the project was completed but Witcombe would make frequent trips down to Victoria to see him and share progress updates.

“I always said to him dad, when I’m rich and famous, I’m going to buy you a VW Beetle. So I think he really appreciated seeing the updates,” Witcombe says.

Witcombe also created a special licence plate out of driftwood for his father with the identification of AEW 001 for Albert Edward Witcombe, number one.