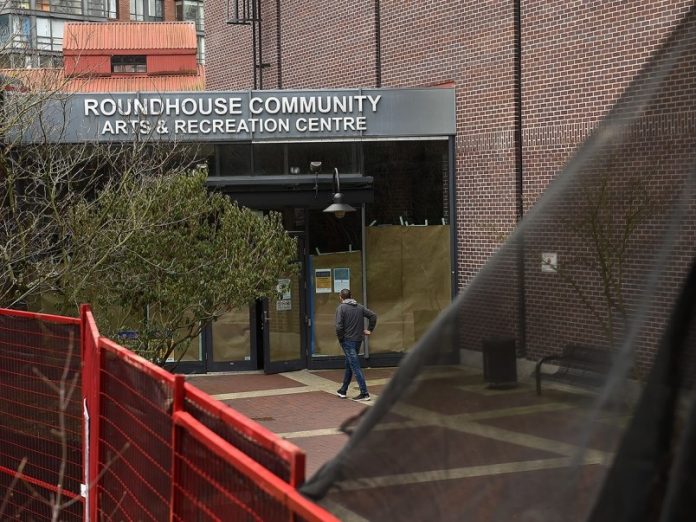 Mayor Kennedy Stewart suggested Wednesday that more of the city’s closed community centres could be used to temporarily house homeless people during the pandemic.

Coal Harbour and Roundhouse community centres opened in late March to people living in shelters and on the street to help them isolate and prevent the transmission of the coronavirus.

“We already have two community centres open, we could open more,” said the mayor at a news conference, when asked for details about his meeting earlier in the week with Shane Simpson.

Simpson is the provincial minister appointed by Premier John Horgan to lead a cross-ministry team to improve conditions in the Downtown Eastside, where homelessness is widespread and physical distancing orders are either being ignored, or impossible to follow.

“We have community centres on offer, if that’s something that the province thinks that they need more of,” said Stewart, noting he expected Simpson to roll out details on the B.C. government’s plan before the end of the week.

Glacier Media requested an interview with Simpson Monday but was told he was not available. Instead, his staff provided an emailed statement in which the minister commented on the challenge of providing better living conditions for people at high risk of contracting the virus.

“That is why as part of our COVID-19 response plan we struck a vulnerable populations working group to identify, assess and address the immediate challenges faced by vulnerable people,” said Simpson, noting the group includes representatives from various ministries, Crown agencies, health authorities and First Nations.

For weeks, the mayor has told reporters that health officials informed him there were no outbreaks or clusters of people who contracted the virus in the Downtown Eastside.

The company is located a half-block west of the Oppenheimer Park homeless encampment, which has grown in recent weeks, despite efforts by the PHS Community Services Society and outreach workers to find housing for people.

“We know that campers trust PHS and are reaching out to staff for assistance,” Simpson said.

“However, it’s clear that given the recent influx of people at the park, there is a need for additional support.”

B.C. Housing is also in negotiations with “a number of additional hotels” and expects more contracts to be finalized within the next two weeks.

Meanwhile, temporary winter shelters that normally close at the end of March have remained open, providing 258 spaces for homeless people.

When Coal Harbour and Roundhouse opened to the homeless, the mayor’s office received emails of complaint and support for the move to transform the centres.

As of Wednesday, 50 people were staying at Coal Harbour and 60 at Roundhouse. Coal Harbour has the capacity to expand to 64 beds and Roundhouse to 79.

The centres were closed in mid-March to adhere to physical distancing measures. So were libraries, pools, ice rinks and other city facilities.

Const. Tania Visintin, a Vancouver police media relations officer, said police responded to Roundhouse regarding a suicidal male and to Coal Harbour for an assault and a report of a missing person.

“I will mention there were no witnesses or suspects, but rather the victim woke up with a scratch to their face,” she said in an email.

“Police continue to investigate. The other incident was a missing person who was found.”

The mounting pressure on politicians to find more housing for homeless people escalated over the weekend at a school located a few blocks from Oppenheimer Park.

Police responded to Strathcona elementary, where a group of housing advocates and homeless people broke into the building and began what they dubbed the “Kennedy Stewart Squat.”

The takeover of the school was to demonstrate the need for safe and secure housing, particularly during the pandemic, according to a news release from Our Homes Can’t Wait.

Police dressed in riot gear arrested 14 people, with some taken from the school’s roof with the assistance of a Vancouver Fire and Rescue Services’ ladder truck.

So far, no charges have been laid.

Truck driver accused of trying to dump poo outside the premier’s...