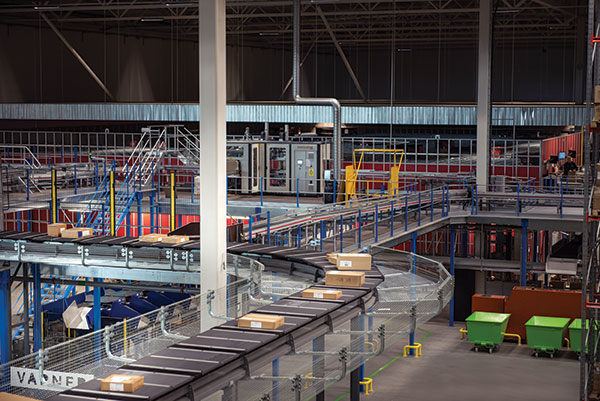 From the start of the project, we declared that we wanted to build the best warehouse in the world.” So says Anders Eriksson, the supply chain director for Varner AS, one of Scandinavia’s largest retailers. Eriksson oversaw the design and implementation of a new 500,000-square-foot, omni-channel distribution center in Vänersborg, Sweden. “Of course, it’s impossible to know or measure if it is the best warehouse in the world,” he adds, “but it was important for us to challenge ourselves and our partner.”

Did they succeed? As Eriksson notes, it’s tough to say. But the final design, developed in conjunction with a system integrator (Swisslog), is one of the most highly automated and flexible retail distribution centers we have come across.

The facility can handle the store replenishment needs of 10 unique retail chains, each with its own go-to-market strategy, along with a fast-growing e-commerce business. The materials handling systems address robotic palletizing and depalletizing, automated pallet storage, automated case storage, automated garment-on-hanger (GOH) storage and robotic goods-to-person piece picking. What’s more, it was designed not only with growth in mind, but also to be ergonomic and sustainable.

The solution features a representation of most of the tools from the materials handling tool box, including:

Eriksson’s take on the facility: “We have a state-of-the-art facility and a supply chain organization that is well equipped, highly competent and prepared for the future.”

In 1962, Frank Varner, a budding Norwegian retailer, opened his first store on Thorvald Meyersgate in Grünerløkka, Oslo. Named for the founder, the Frank Varner store became a huge success. Three years later, Varner opened another store in Oslo and one in nearby Trondheim. In 1967, Varner coined the name Dressmann in connection with another new store opening in Oslo. In the ensuing years, Dressmann stores opened at a record pace across Norway.

Today, Varner is a family-owned, value-driven fashion retailer and one of the largest fashion retailers in Scandinavia, with an estimated $1.2 billion U.S. in revenue in 2018. The company describes itself as “a progressive workplace… [that thrives] on innovative business development with the customer in constant focus” and adds that through its innovative omni-channel retailing strategy, its goal “is to become the leading data and tech-driven fashion company in Scandinavia.”

With nearly 11,000 employees and 1,400 stores across seven countries, Varner has 10 retail chains operating under their own unique brands, including Cubus, Dressmann, Dressmann XL, Bik Bok, Carlings, Volt, Urban, WOW, Levi’s Store, Nike Store and Days Like This. While the majority of the stores are located in Norway, Sweden and Finland, Varner also operates stores in Iceland, Denmark, Austria and Germany. All of the stores and e-commerce customers are supplied from the central logistics center in Vänersborg.

Planning for the new facility began in 2013. Prior to that, each of the retail chains operated their own distribution networks independent of each another. These operated from 10 different manual warehouses in Northern Europe, all operated by 3PLs. While the supply chain had evolved over the years, it had become too complex and inefficient to address Varner’s changing needs. What’s more, Varner did not have the level of control it wanted over its supply chain.

“Fashion retailing is a highly competitive business, so you have to constantly cut costs and improve your quality and control in the supply chain,” Eriksson notes. The idea, then, for the new facility was to bring all of Varner’s distribution, including e-commerce order fulfillment, under one centrally located roof that would enable efficient last-mile delivery and cut lead times for smaller and more frequent store deliveries, resulting in less back stock in the stores.

“When we decided to centralize all of our products into one warehouse, the main driver was to become more efficient and minimize our store stock,” Eriksson says. All of those factors pointed toward automation, as did the tight labor market in Norway and Sweden.

In addition to design questions, the retailer needed a central location to serve all of its growing markets. “We did a center of gravity analysis, and it became clear that the warehouse should be located somewhere in the western part of Sweden, near the harbor of Gothenburg, but still close to Norway, where the company is headquartered,” says Eriksson. In Vänersborg, the company not only found the proximity to the port and its markets, but also a lot of suitable land was available for the warehouse and an additional lot for future expansion if needed.

Varner worked with its systems engineer partner for nearly two years to conduct a conceptual study, design the solution and select the partner for the project. Swisslog, which conducted the original study and design process on a consulting basis before winning the contract, notes that it devoted some 8,000 hours developing three different concepts before it was selected as the implementation partner. The build and implementation phase got underway in the middle of 2014 and was completed mid-2016. The robotic goods-to-person picking area is currently under expansion, growing from 60,000 bins to 115,000 bins to meet the growing e-commerce channel as well as more strategic store replenishment.

“Part of our company culture is to be very involved with our partners during the development phase, and the warehouse project was no exception,” says Eriksson. “We participated actively and learned a lot about warehouse automation. We felt comfortable that we had chosen a great solution.” He adds that during the course of the project, Varner made considerable changes to the way it replenishes its stores, and that the solution proved flexible enough to adapt to the changes along with the company’s growth.

The primary picking engine for e-commerce and store replenishment orders is a goods-to-person robotic solution like this one.
The facility also features a garment-on-hanger area (not shown).

The new distribution center has been described as a “complete solution that handles today’s demands for omni-channel” and “supply chain operations on the customer’s terms, whether they buy in the store or online.”

It balances the need for speed and accuracy; handling goods at the pallet, carton, each and hanger levels; and to minimize labor given the low employment rates and relatively high wages in Norway and Sweden. Receiving, palletizing and depalletizing, storage, picking and packing, and labeling have been automated to the extent possible. For that reason, the facility is able to operate with 80 to 100 employees—a relatively low number given the size of the facility and the number of cartons handled per hour.

There are five areas of automation:

The cross-belt sorter is essentially the traffic director for the facility, making sure cartons get to the right area in the facility based on where they’re most needed, from crossdocking inbound merchandise to an outbound truck to replenishing the robotic goods-to-person picking area.

The mini-load, which is automatically replenished by the pallet warehouse, is the main engine for carton flow—it brings cartons out of storage on an as-needed basis and sends them to the area where there is demand. That could be a full carton that goes to shipping or a carton that will be decanted into a tote to replenish the robotic goods-to-person picking area.

The robotic goods-to-person picking area creates single and multi-line orders for e-commerce fulfillment as well as mixed SKU cases for store replenishment. Once a shipping carton or e-commerce package is complete, the items are sorted by the cross-belt or a bag sorter to the right area.

And, the garment-in-hanger area combines automated storage with conventional picking in a three-level pick module for items that aren’t handled in cartons or totes.

The additional data, as well as the quality of the data, collected by the automated system has been a bonus benefit. “We improved the quality of our logistics data and we have a better understanding of the importance of data quality” as a result, Eriksson notes.

While Varner employees are responsible for the warehouse operations, the retailer has outsourced maintenance of the automation and the warehouse management and control systems to Swisslog. “We are still in charge of the logistics center, but seven technicians from Swisslog work full-time in maintenance and their IT specialists support the warehouse management system,” Eriksson explains. Swisslog is also responsible for training associates when needed. The reason is that “we don’t gain any economies of scale doing service and maintenance with our own staff, so it was an easy decision to outsource those functions,” he says.

The facility has been running for four years, with a major expansion of the goods-to-person picking area underway. Whether it’s the best retail DC in the world may be difficult to answer, but for one of Northern Europe’s leading retailers, it is “a world-class facility that we use as a precision tool for inventory management to deliver the correct items to our stores, when they need them,” Eriksson says. “And, we have the warehouse capacity we need for the foreseeable future. We no longer talk about the limitations of our supply chain, just about how well everything runs.”

Frostproof triple homicide arrests: ‘This is evil in the flesh’ –...

Your ultimate guide to 100+ Charlotte ice cream shops, by neighborhood