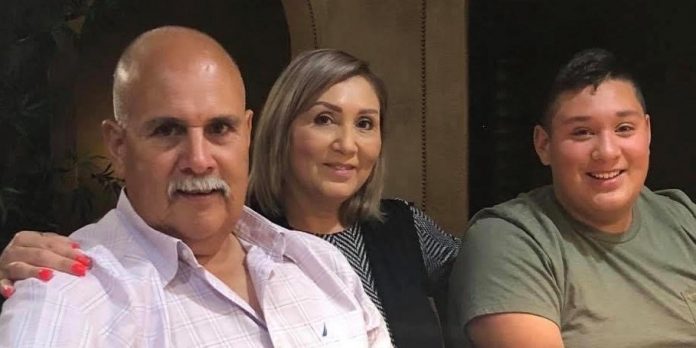 Armando (from left), Lorena, and Armando Veliz Jr. of Calexico celebrate Armando’s 52nd birthday in this 2018 photo. On Aug. 25, Armando, 54, and his son, who was 16, who fixtures in the local car club community died in a vehicle fire. | COURTESY PHOTO

Yet the pair was also known for their impact on the lives of others.

“’Mando’ (Sr.) was a kind, loving person and got attached to a lot of people. He would walk up to anybody and you would think they had been friends for years. And to me that was a gift from God,” said Mando’s sister, Rebecca Veliz.

“Everything about (Armando Jr., or ‘Mandito’) was special,” said Tony Veliz, Mandito’s uncle and Mando’s brother. Tony said Mandito was born a “preemie” — the “miracle boy,” the family would call him — “making it through was just a miracle.”

The Veliz family and just about everyone who knew Armando and his son are still in shock over their deaths Aug. 25, when the father and son died together in a tragic accident, the details of which are still too difficult for the family to talk about.

Family and friends describe them as being inseparable, very much alike and with similar interests. They loved working on vehicles, trucks, cars, and off-road RZRs. They could fix just about anything.

“I wish it was just a dream,” said Tony, who got the call around 2 a.m. Aug. 26 from another family member about Mando and Mandito’s passing. “I knew it was nothing good. It’s unbelievable, can’t make any sense of it. The way I see it is that the good Lord has a good path for them. Heaven has two more angels. Sometimes we don’t understand why, but there is a reason and purpose for everything that happens.”

“It has been hard because their sister just passed away in November,” said Mando’s niece, Analisa Veliz.

“He was the best man in the world and worked hard to give us what we needed. He had two jobs and had extra jobs,” wife, Lorena, said. “He would also do everything for others. He would say, ‘Mija I will be right back.’ … He was marvelous. He adored my children and my grandchildren from my previous marriage.”

“I could count on him (Mando) to guide me. I will miss the fun trips we used to have and the great laughs and great times,” said stepson Ricardo, who helped his mother get through an interview with the Calexico Chronicle.

“Mando was adventurous and very helpful,” Ricardo said. “If something came up, he was always willing to join or be part of whatever situation it was, a trip, an event, always excited to be part of it. They (both Mando and Mandito) were spontaneous. They were team players.”

“My son was the same as my husband, loving and caring,” shared Lorena. “He loved his brothers and sisters. He would make jokes and liked to help people. If something didn’t work, he would go help, just like his dad. His dad showed him everything. They were inseparable and sometimes I felt that he felt his dad depended a lot on him, especially when it came to the RZR, he would Google everything.”

Lorena said that if someone from the car club couldn’t fix something, Mandito would say, bring them over to the house, we will fix it. “They (Mando and Mandito) had a big heart,” she said.

Lorena said she is appreciative of the community, friends, and family for its support. The family is doing OK, day by day, she said. She added Mando’s daughter, Natalie, is working on funeral details to be announced.

Mandito: One of a Kind

“Armandito was a stand-up kid. His dream was to race in the desert someday. They (Mandito and his dad) loved what they did. They died doing what they loved,” said Ilza Veliz, Mando’s sister-in-law.

“Mandito was a very loving and caring young man,” his Aunt Rebecca said. “I used to take care of him. He was very kind, and he was dear to me.”

“Mandito loved to handle a lot of stuff, fix things that no one could fix. He was not on (the) computer to play games but to see if there was something to be fixed,” his Uncle Tony said.

John Schaefer, a longtime family friend and member of Del Valle Car Club, said Mandito would go to car clubs with his father since he was 4 years old.

“He would go with us to shows, and help his dad clean his truck. My boys, now 15 and 17, were really good friends (with Mandito). It was like a big family. He was always setting it up, and he was the one who went for the trophies for his dad,” Schaefer said.

When Mandito was born, Analisa recalls, he was a preemie, very active and liked to get into everything, very curious and adventurous. His brothers and sisters were older, in their mid-20s, so he had all the attention.

“Mandito was into electronics, games, phone as a teen. He was loving and very respectful,” Analisa said.  “He was a good, good kid and got along with everybody. He played football and my uncle (Mando) was his coach. He was also into racing and they (Mando and Mandito) were always together.”

“He (Mandito) loved being together with (his father) because they had a lot of things in common. He would go polish vehicles, etc., and go to car shows. When (my) brother got the RZR, they would ride out to the desert. They just clicked and were very close — a relationship/bond with his son that was very unique,” Rebecca said.

“He (Mando) was my bro, my best friend, my best man at my wedding; basically, my ‘go-to’ guy,” Tony Veliz said. “Yeah, we always had differences but (were) always together.

“Mando was a good mechanic, very detailed. It had to be done the right way or don’t do it at all. He built his lowrider,” Tony noted. “I’ll be honest with you, he would not eat just to put money into his truck. When in Salinas, he was very heavy into the lowrider scene and forever.”

“He (Mando) was such a good person. He would always look up to us since we were the oldest,” said Ilza, who is married to Tony. Tony is 69 years old. “He was kind-hearted and helped anybody. He knew how to talk to people and was an encourager to many people.”

Brother Ramon recalls when Mando was a teen, he had a bike and had his radio on it. He was real creative and liked to fix it up.

“Back in the ’80s, his first ’76 Chevy pickup (square cab with short bed), he put air shocks on the bed, had a compressor, made hinges, hit a switch, and the compressor would lift up the bed. Guys would come from all over to see the ‘Transformer,’” Ramon said.

From there, Ramon said, he had people lined to work on their mini-trucks to add lift beds.

Mando’s “Troca Loca” truck was very well known in the Valley and throughout the lowrider community.  The truck was featured in Lowrider magazine twice — once as a centerfold.

Mando attended Calexico high school and played football. His work experience was mainly in the agricultural business and as truck driver with Veliz Trucking, where he served various companies (Fresh Western, Havens & Sons Trucking, and other companies in the Valley, family said).

“I was very proud of the accomplishments he (Mando) had throughout his life,” Rebecca said. “It wasn’t easy, sometimes he would struggle, but he never gave up on anything and I loved that of him.”

“He (Mando) was very bright, very articulate about the things that he did. Such a can-do attitude and again gone too soon. It comforts me to know that they both died together and doing what they really liked, that was their passion. They used to call Mandito his shadow,” Rebecca added.

“When your car is displayed at car shows, (there is) such a moment of pride because so much blood, sweat and tears go into the vehicle. Mando put a lot of work into his ‘Troca Loca’ truck,” Schaefer said.

Schaefer described Troca Loca as a 1996 full-size Chevy truck bed, with a “candy red and pink paint job with anything you can imagine: pin stripes, designs, graphics, murals (airbrushed drawing) and so much modifications — tilt front-end, walk-through cab from back of cab, shaved door handles, and the front end has a hydraulic end that tilts forward,” he said.

Schaefer said that Mando’s wife, Lorena, told him that the truck was not going to be sold and she wants it to stay in the car club.

“It is in my garage next to my other car, Chuko 59, one of the first (El) Caminos made — and Mando loved it. It’s funny when I open the garage, they are both together. It brings back a lot of memories,” Schaefer said.

Schaefer invited car clubs throughout the Valley to attend a meeting to coordinate a united fundraiser for the Veliz family. Over 10 clubs came together. Donations received will be used for fundraising, services, or other family needs.

“We have nothing but love and respect for them (the Veliz family). Since day one they have always been our family, and Mando and Esteban always will be in our hearts. They will be missed,” Schaefer said.

The family also has a GoFundMe site for the father and son at: https://www.gofundme.com/f/passing-of-son-and-father

Department of Health: Plans not finalized for COVID-19 test site |...

11-year-old boy, caretaker, killed after being struck by pickup driver in...

NASCAR is a rare sport that has found success navigating an...