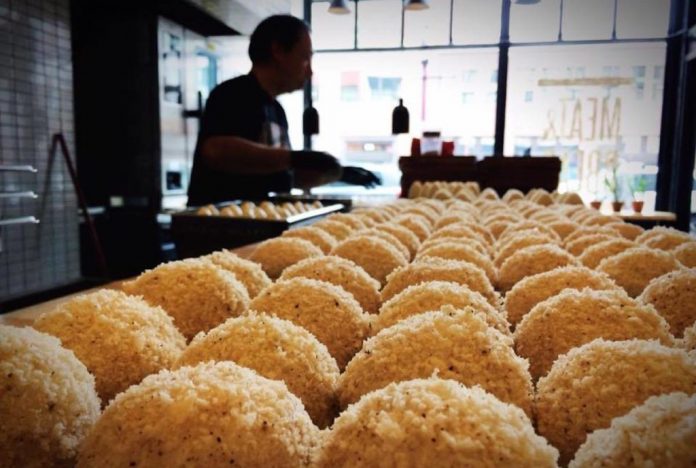 Andrew Paumier is struggling to keep his food truck profitable in the middle of a pandemic.

Normally, he and his wife would be serving their deep-fried risotto balls to a lineup of customers down a busy street corner or preparing their stock for an upcoming festival. Instead, they’re strictly limited to take-out or delivery apps.

So far, he’s lost 90 per cent of sales compared to last year.

“In the first two days of the provincial lockdown we lost $4,000 dollars in event bookings,” said Paumier, the co-owner of Indecent Risotto. “If we come out at the end of the year with 10 per cent in sales compared to last year, I’d be really happy.”

Though he longs for the days before COVID-19, he said the business is waiting for the green light from the provincial government – and in the meantime, he’s helping lead a forum about it.

The BC Restaurant and Foods Association hosted Indecent Risotto and nearly 25 Greater Victoria food businesses in a Zoom meeting on Monday to discuss their ideas on how to re-open safely when time allows.

“The big piece is customer confidence,” Paumier said. “It will be our biggest stumbling block if we don’t get it right and show the public that our operations will be safe going forward.”

When the couple’s food truck was hit by the COVID-19 regulations in March, Paumier and his wife immediately stopped their daily operations and self-isolated for two weeks to ensure they didn’t catch the virus.

Recently, Paumier sent a letter on behalf of Indecent Risotto to most CRD municipalities, asking to lighten their bylaws in order to allow their food truck to operate in public areas, specifically ones with high visibility areas “such as the Juan de Fuca Rec Centre parking lot.”

Even though the whole success of food trucks rely on the abundance of crowds, proper social distancing measures can be taken, said Paumier.

The forum provided an opportunity for smaller businesses to voice their concerns, which can significantly differ from large restaurant corporations, Paumier noted. Most small businesses run on a small profit margin, sometimes between three to five per cent. When they don’t have enough of a buffer, small mom-n’-pop shops begin falling through the cracks.

As far as it goes for the food truck, Paumier said he’s glad he won’t have to deal with fixed overhead during the pandemic – but that can’t be said for most brick and mortar shops.

For more news from the Island and beyond delivered directly to your email inbox, click here.