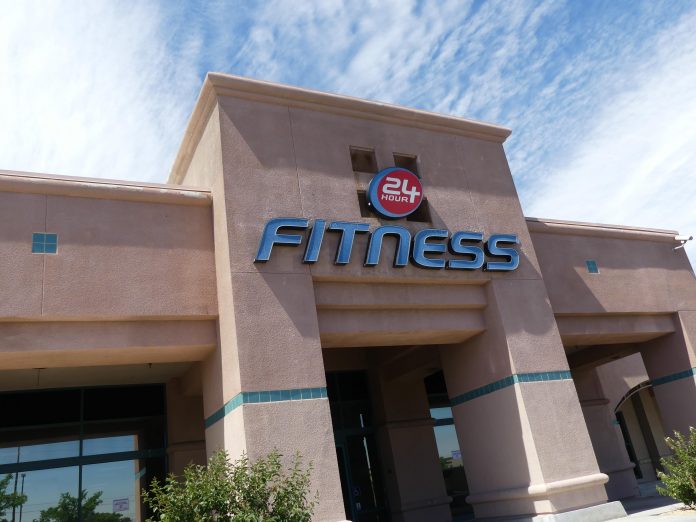 VICTORVILLE — After the California Department of Public Health approved the reopening of gyms, two popular fitness centers in the Victor Valley have announced they will shutter their doors for good.

Company officials announced last week that the 24 Hour Fitness on Bear Valley Road in Victorville would not reopen. Likewise, the Fitness 19 location on Main Street in Hesperia will also remain shuttered.

On Friday, a Daily Press reporter found locked doors at both gyms. At 24 Hour Fitness, employees were seen removing containers of powdered protein, energy drinks and other supplements from the fitness center and placing them into a U-Haul truck.

Several signs that read “This Club is Closing” were posted on the doors and windows of the 24 Hour Fitness, a security guard told the Daily Press on Saturday.

The signs also invited 24 Hour Fitness members to workout at nearby company-owned locations. June 22 is the reopening day of the 24 Hour Fitness located at 18825 Bear Valley Road in Apple Valley, the company website said.

On June 11, 24 Hour Fitness CEO Tony Ueber told club members via email that he was excited to announce plans to reopen many locations after the company closed its clubs in March in response to the COVID-19 pandemic.

In the letter, Ueber said some of the fitness clubs would remain permanently closed. The 24 Hour Fitness website revealed that 100 locations would be shuttered, including 33 fitness centers in California.

The gym closures came after the Wall Street Journal reported last week that the company had laid off a number of employees across the country as it struggles with the negative financial impact from gym closures amid stay-at-home orders.

On Monday, Ueber announced a financial restructuring for the company through a voluntary Chapter 11 filing that is expected to financially strengthen the company.

“As part of this, we have received commitments for $250 million in financing that will allow us to continue our club reopening process without interruption,” Ueber said. “This restructuring will enable us to eliminate debt and close selected clubs that were either out-of-date or in close proximity to other 24 Hour Fitness clubs.”

“We will have the financial flexibility to upgrade our equipment and expand and improve our fitness offerings to best serve our members and continue our transformational journey,” Ueber said.

Before the closures, the company had more than 400 gyms in 14 states, with nearly 22,000 employees, the Wall Street Journal reported.

“Reducing the number of clubs in our network will allow us to meet the needs of the majority of our members and allow added flexibility to re-invest in the clubs we are reopening,” Ueber said. “As a reminder, you can enjoy access to any of these locations as they reopen.

The 24 Hour Fitness website includes new protocols to help guard against the coronavirus, including limiting the amount of members into the club at one time. Those wishing to workout must now reserve a workout through the company’s app.

The website said 24 Hour Fitness centers will open from 5 a.m. to 9 p.m. daily to allow for overnight cleaning. Also, some equipment may be powered off or moved to provide ample space for members to workout safely. Courts will be repurposed as extra workout space, and no ball sports will be allowed. All Kids’ clubs, wet areas and drinking fountains will remain closed for the time being.

“They upset a lot of customers by charging dues a month after they shut down,” Centola said. “I don’t think there’s many people that are going to stay when they are offering one-third of their amenities, and from all we have heard, we’ll still be expecting their already high monthly dues.”

Soon after the clubs closed in March, many 24 Hour Fitness members were charged one last time before the company froze membership dues in April.

Bodybuilder Johnny Espinosa said he spent the best days of his career at 24 Hour Fitness in Victorville.

“I spent thousands of hours with friends making each other better, and I went from an amateur bodybuilder to a world class pro, all while helping and coaching others there to do the same,” said Espinosa, who lives in Victorville. “Dreams really came true there.”

On Friday, rows of treadmills stood at attention just inside the closed Fitness 19 near the Cardenas supermarket in Hesperia as signs posted outside explained how the COVID-19 pandemic had forced the gym’s closure after seven years in operation.

The Fitness 19 letter said all memberships from the Hesperia location would be transferred to the Fitness 19 at 13605 Bear Valley Road in Victorville, which opened on June 12.

The Fitness 19 website includes a list of access changes for its members, including contactless entry at the front of each gym, the temporary closure of the Kids Club and a limited number of members allowed in the gym.

For more information, or to see the complete list of safety and health protocols for Fitness 19, visit www.Fitness19.com or email 280hesperiaca@fitness19.com.

Rene Ray De La Cruz may be reached at 760-951-6227, or by email at RDeLaCruz@VVDailyPress.com. Follow him on Twitter @DP_ReneDeLaCruz.

Electric Trucks Could Prove Pivotal In EV Survival Through Downturn