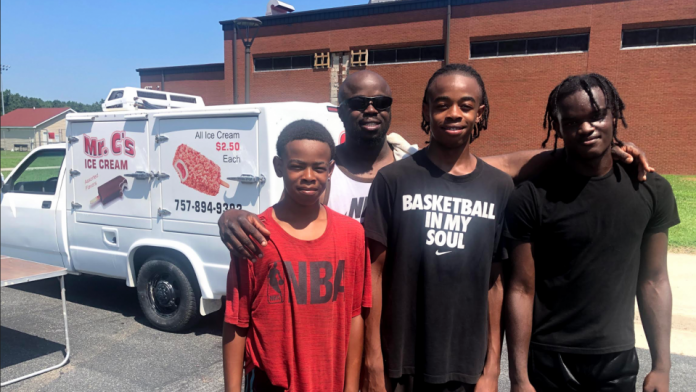 An Accomack County man had a unique solution when his sons said they were bored this summer.

Kevin Cropper Sr. of Withams bought for his sons an ice cream truck he found online to fix the problem.

His younger son, Jordan Cropper, who is just 12 years old, also is working with his brother in their new ice cream truck business.

Their first cousin, R.J. Tull, will be helping while also working another job at the Oak Hall Food Lion store.

When Kevin Cropper Sr. brought the truck home, his wife LaTanya was skeptical, but she began to like the idea after a while.

Cropper bought the truck from Hopewell, near Richmond, and once he got it home, he had lettering and graphics put on the truck.

He posted the idea of putting his sons in business on Facebook, where it garnered a lot of supportive response — including some from Washington D.C., Dover and Wilmington, Delaware, and from the Hampton Roads area.

Cropper said he was taught the value of hard work at a young age from his grandfather, Albert Cropper, and later his father-in-law, Daniel Douglas.

Kevin Cropper Sr. continues to instill those same values in his own children today.

He even put business records for the truck, called “Mr. C’s Ice Cream,” on the computer accounting software Quickbooks and showed his sons how to enter the transactions themselves.

The truck will be in Onancock on Monday, July 27 beginning at 3 p.m. and will stop by a few towns on its way north on Route 316. Future schedules are to be determined.

The younger son, Jordan, said while he does look forward to serving ice cream to people for the remainder of the summer, he also looks forward to the easy access of the treat.

“I just like that I can get ice cream anytime I want,” he said.