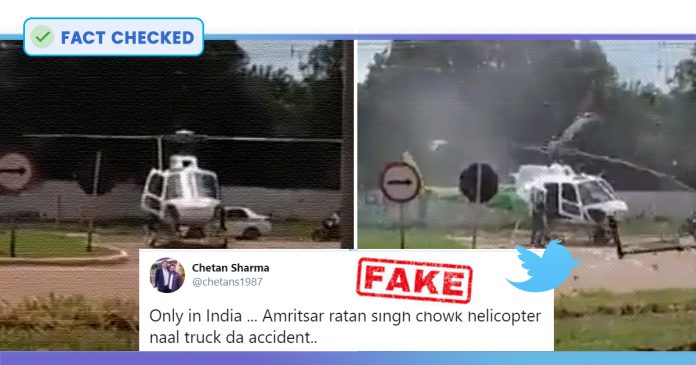 A video showing a truck crashing into a parked helicopter is being circulated with the claim that the accident happened in Punjab, India.

“Only in India…Helicopter and truck meet with an accident at Ratan Chowk, Amritsar (Translated to English),” reads the caption of the post.

A truck can be seen colliding into the whirling blades of a helicopter, in the viral video. The crash is followed by the truck’s cargo toppling over.

The Logical Indian received a request to verify the claim made about the video.

A truck collided into a Helicopter in Punjab.

The claim is false. The video is from Brazil and was taken in January 2020.

A Google Reverse Image search was done by breaking the video into individual frames using InVid.

This led to a Youtube video dated January 2020, titled ‘Truck collides with propellers of a helicopter’.

The video had the text ‘diariodominicao.com’ written on it. A keyword search led to a Daily Mail report dated January 18, 2020, which carried the viral video.

According to the report, a police helicopter which was ‘preparing to take off from a road in a Brazilian city was seriously damaged, and two of its occupants were injured, when a passing lorry came too close and collided with its blades’.

The footage of the incident shows the chopper on the ground with its blades whirring in the Second District of Rio Branco, in the northwestern state of Acre, when a white truck turns a corner and tries to go past the aircraft.

The blades of the helicopter crashed against the side of the lorry, ripping off its roof and leaving the rotor wings bent out of shape.

The helicopter belonged to the Integrated Centre of Aerial Operations (CIOPAER) of the Military Police.

According to Colonel Oliveira, from the Acre Military Police, there were five people in the helicopter at the time – two commanders and three members of the crew.

“Two crew members had light injuries and were taken for treatment’ and are now ‘well’,” he added.

The lorry was being used by the Secretary of State for Health’s office to transport hospital waste.

Charles Matos, a manager for the company which the lorry belongs to, confirmed that no one in the vehicle was injured.

Another report on the incident can be accessed here.

The governor’s note on the incident can be read here.

Therefore, the incident occurred in Brazil and not in Punjab.

If you have any news that you believe needs to be fact-checked, please email us at factcheck@thelogicalindian.com or WhatsApp at 6364000343

Also Read: Fact Check: ‘Drone Boy’ Prathap Made Fools Out Of Media, Misappropriated Other’s Works As His Own

NEWSPORT DAILY-Police appeal for witnesses and dashcam footage in series of...