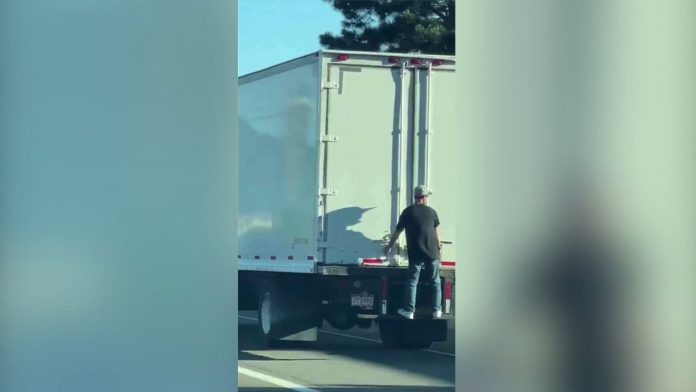 AURORA, Colo. (KDVR) — A video showing a man hanging off the back of a truck moving at high speeds on Interstate 25 in Colorado has gone viral.

David Meyer, of Aurora, Colorado, says he has witnessed a lot of strange things on his daily commute along I-25.

“There is always crazy stuff that I, for whatever reason, just happened to see,” he said.

But on Friday morning, he was in disbelief.

“[It] is the craziest, there is no doubt about it,” he said laughing.

A little before 8 a.m., Meyer shot a video from his car of a man hanging on to the back of a large truck while going about 70 mph.

Meyer says he wasn’t sure what he was shooting at first.

“I thought someone had stuffed a pair of pants and a shirt, and put it on there.  As I got closer, I realized it was a real guy,” said Meyer.

But the reason he was back there was still unclear to Meyer.

“I thought, ‘Is this just a kid doing a stunt? You see all this stuff on the news about people blocking traffic, blocking the highway, jumping on different trucks and vehicles.  I had no idea what was going on,” said Meyer.

Meyer tried to create distance between the truck and other drivers, while another person tried to get the attention of the person driving the truck.

“I noticed there was another vehicle talking to a truck driver, getting him to slow down, so I kind of pulled back.  I was zoomed in pretty far.  I was back several hundred feet from him, just in case anything were to happen,” Meyer recalled.

That’s exactly what Colorado State Patrol trooper Josh Lewis says made the incident so dangerous, though.

“Not only is the person hanging on the back in an unsafe position, but anybody around them is now unsafe.  Certainly, if that person falls off, they want to do what’s right and avoid them.  But now they’ve put themselves in danger,” said Lewis, adding that he had never seen anything like this happen in Colorado.

He cautions drivers in similar situations to call 911 rather than try to get involved.

“Certainly 911 operators — they’re trained to ask questions, get the information.  So listen to what they have to say, answer their questions,” he said. “That’s how they can get an emergency response as quickly as possible.”

Re-examining Issues of PPE and the Hierarchy of Controls — Occupational...