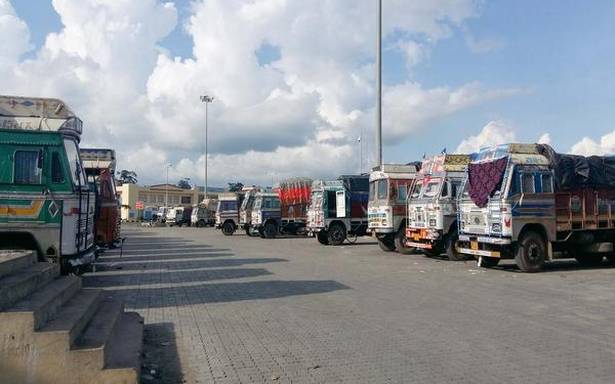 More than 2,300 trucks of Indian origin are stuck or stranded along the India-Bangladesh border in the Petrapole-Benapole region, nearly 100 km from Kolkata, as vehicular movement between the countries has taken a massive hit because of local resistance and fears of a Covid outbreak.

Customs officials and other sources say that while 2,103 trucks — mostly loaded — have piled up on the Indian side awaiting clearance to unload stocks, 228 trucks are stranded at Benapole, on the Bangladeshi side.

Petrapole, located in the North 24 Parganas district of West Bengal, is the largest land Customs port on the Indian side and accounts for a majority of India-Bangladesh trade.

India’s exports to Bangladesh stood at $9.21 billion in FY19, while imports from that county stood at $1.22 billion, with approximately 500 trucks moving on a daily basis either way. Trade also happens through trains.

Train movement is still on, maintained Chaitali Chakraborty, District Magistrate of North 24 Parganas. “Trade is happening and train movement is on along the Petrapole-Benapole route,” she told BusinessLine.

Stranded at the border

Sources said that on the Indian side, 231 trucks are stranded at the border (on the way to the integrated checkpost, or at the checkpost, at Petrapole); another 572 are parked at a facility managed by the local municipal body; and around 1,300 have registered for loading-unloading operations but are now parked at different non-registered/private parking lots nearby.

Truck movement through Petropole first came to a halt on March 23, after West Bengal imposed a lockdown. Subsequently, the Centre announced a lockdown that began on March 25.

Vehicular movement resumed between April 30 and May 4, when it was decided that trucks would move until the ‘zero point’, where loading-unloading operations take place. However, truck movement was subsequently stopped following local political trouble.

On April 30, two vehicles carrying maize seeds and jute were allowed till zero point. The next day, May 1, was a holiday. On May 2, some 13 vehicles moved to Benapole. A day later, a Trinamool Congress-backed trade union, which controls a majority of the labourers and clearing agents, raised objections to the cross-border trade citing its members’ health concerns. Subsequently, this led to the suspension of truck movement.

“Issues like social distancing norms or availability of PPEs (private protective gear) cropped up as work began towards April-end. Moreover, most labourers and clearing agents do not get insurance coverage, either from the Centre or the State government. With health and safety concerns rising, truck movements were hit,” said Karthik Chakraborty, Secretary, Petrapole Clearing Agents’ Staff Welfare Association.

Reminding West Bengal of its April 24 order to allow cross-land border transportation of essential goods to and from Nepal, Bhutan and Bangladesh, the Union Ministry of Home Affairs (MHA) said the State is yet to file a compliance report.

The MHA wrote: “The unilateral action…to stop the cross land border movement of essential goods would have larger implications for the Indian government with regard to its legally binding international commitments…”

West Bengal on its part has already proposed that a train route through the district of Nadia (Gede-Darshana route) be used as an alternative to transport essentials to and from Bangladesh.

Other available train routes to Bangladesh via West Bengal are Radhikapur-Birol and Singhabad-Rohanpur. For trade with Nepal and Bhutan, the trade points (through Bengal) include Panitanki and Jaigaon.

Truck Racks Market Is Expected To Record Severe Upsurge By 2025...

Pictures show truck in sea in Margate near harbour arm