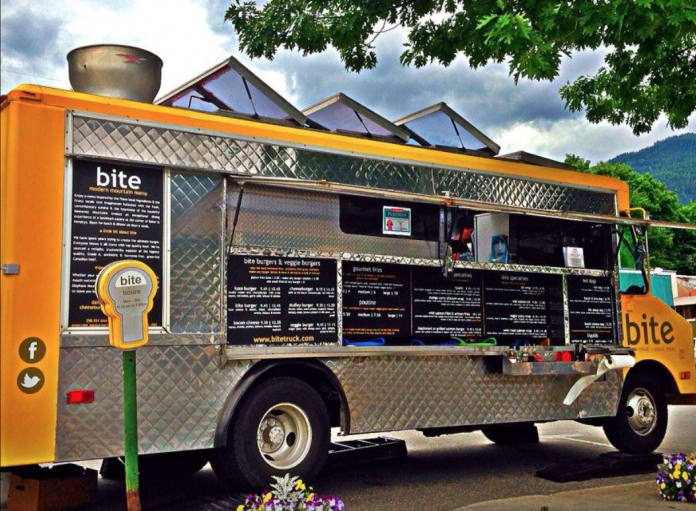 The city has put the brakes on a new policy that would give the green light on an increase of food trucks in the downtown.

In light of the COVID-19 pandemic, the city has instituted a one-year moratorium on new food trucks that require street parking stalls, and will continue to conduct a review of the policy (prior to summer 2021).

The pandemic has brought to the forefront the need to support brick-and-mortar businesses at this time, preventing a more permissive policy on food trucks, noted a city staff report to city council on the matter.

“Although I do think that food trucks add an element of interest during tourist season, at this particular time, with brick-and-mortar (establishments) under so much stress, that this would add to that stress,” said Coun. Jesse Woodward on allowing food trucks into the downtown.

“We are going to come back to this and we will see how we can incorporate food trucks into Nelson. At this point it would really seem unfair.”

Requests have been made for food truck operators seeking permission to set up at metered parking stalls in the city’s downtown. But with the authority to grant such licences falling to city staff, the volume of requests necessitate a consultation with downtown businesses and a policy update, said city planner Alex Thumm.

“In the past year staff have denied applications for new food trucks on the basis that the current policy is in need of an update, in consultation with the business community, to reflect the balance needed between a healthy brick-and-mortar business environment, encouraging diverse food options, and on-street parking supply,” he said in his report to council during their regular business meeting.

One of the options to exempt non-metered and non-residential parking spaces from the moratorium — which could allow for an application to be considered in Railtown or another non-metered spot — intrigued Coun. Keith Page and he proposed a friendly amendment to the moratorium motion.

“As much as we are closing a door for the moment on some of the people, we are also closing the door on some of our other existing restaurants to look at opportunities to experiment and entrepreneur outside of their normal box,” he explained.

“But we have someone knocking at the door asking to try and conduct some business, so I think we should be far more permissive in creating that kind of complex, diverse community happening downtown where there is just more options.

“I’m very hesitant to say we keep shutting this down.”

Coun. Cal Renwick did not want to go down that road.

“I have a problem with the amount these (food trucks) are paying in comparison to our brick-and-mortar people. They could roll in here for $300 to $400 dollars per month, for the best months of the year, and then take off,” he pointed out.

The owner-operated enterprises generally have no staff either, he added. “I think we need to look at this further,” he cautioned.

“We need to ensure that our brick-and-mortar businesses have a capacity to thrive and that they don’t face further hardship,” she said.

How many existing restaurants have inquired about setting up a food truck, asked Coun. Rik Logtenberg.

Thumm said last month one owner of an existing restaurant inquired about setting up a truck in front of their own business.

Mayor John Dooley asked if the province had regulated food trucks since the outbreak of the virus.

Food trucks are regulated like restaurants to do take out only, replied Thumm.

“And, as such, food trucks are take out only,” no matter what, he said.

The amendment to the resolution failed, but the motion to institute a moratorium passed.

“This resolution works for us at this point in time, I don’t see any need right now to confuse it,” said Woodward.

City staff will draft an amended mobile vending policy at a later date post-COVID-19, once the local economy has stabilized.

The current Street, Mobile Vending and Sales Policy allows food trucks in the downtown area “at the discretion of the city manager or corporate officer,” with the possibility of appealing staff’s decision to council.

However, a 45-metre rule effectively excludes food trucks from most of the downtown core (one block is approximately 100 metres).

In summer 2019, about 50 downtown parking spaces were used full-time by businesses:

“Dialogue with the business community will be important in determining an appropriate balance between publicly accessible parking supply and private uses of parking spaces that nonetheless afford their own benefits to downtown vitality,” he said.

Everything in its place

Thumm felt there was likely a place for food trucks in the downtown, but there were numerous considerations that the policy should address, such as:

The moratorium does not mean the end of food trucks. In fact, food trucks are permitted on most commercially-zoned private property and is not dependent on city approval, which would only be for the use of a parking stall.

The Zoning Bylaw classifies them under the “Mobile Food Vendor” land use, which is permitted in the C1 Downtown Commercial zone as well as: C2 (Service Commercial), C4 (Railtown), MU1 (Waterfront Tourist), MU3 (Railtown), MU6 (706 Herridge Lane), I1 (Institutional), and P1 (Parks).

“This means that a food truck may set up on private property without city land use approval, subject to a business licence, a fire safety permit, Interior Health permits and other permits as necessary,” said Thumm.

Nelson Fire & Rescue Services requires that food trucks be at least three metres from any building.

Driver of pickup truck fatally shot while traveling on Loop 1604,...

Search on for truck who plowed through protesters, hit woman