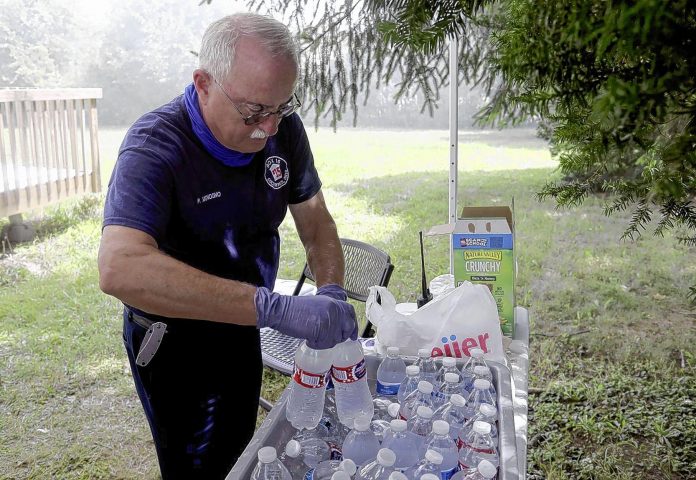 A July 4 fire at Crystal Lake Apartments in Hilliard was the largest blaze that Norwich Township Fire Department firefighters Kyle Campbell and Tobias Cook had seen.

But as the young firefighters, members of their unit and first responders from other departments in central Ohio worked in the summer heat to battle the flames that destroyed an entire building in the apartment complex, they knew a handful of volunteers in what looked like a nondescript ambulance had their backs.

“It was great to have the water and snacks after coming out of the fire,” said Campbell, 24, who has been with the Norwich Township department for eight months.

“When you’re tired and sweaty and out of breath, and (you) look up and see Box 15, it’s a great sight,” said Cook, 26, who has been with Norwich Township for a year.

Box 15 is a central Ohio nonprofit 501(c)(3) organization that has been a supportive presence for firefighters since 1947, providing “firefighter rehabilitation” at active fire scenes.

Firefighter rehabilitation, a standard that the National Fire Protection Association introduced in 1986, entails providing working firefighters with replenishing water and nutrition, as well as ensuring they are not at risk of heat exhaustion, said Joe O’Brien, president of Box 15.

“It is maintaining the well-being of firefighters during the performance of fire suppression,” he said.

Volunteers also bring fans, water misters, benches and, if needed, a portable decontamination shower for firefighters and their gear to mitigate the potential exposure to such cancer-causing agents as asbestos in some fires, Mignogno said.

Presently, Box 15 has 21 active members. Six, including Mignogno and O’Brien, are retired firefighters.

Mignogno, 68, lives in Pataskala and worked 17 years, including the last two as fire chief, at the volunteer Goshen Fire Company in West Chester, Pennsylvania, near Philadelphia, before another job brought him to central Ohio last year.

O’Brien, 62, lives in Lewis Center and retired in 2003 from the Cary Fire Protection District in northern Illinois near Chicago. He joined Box 15 in 2010.

“It was my way to pay it forward,” O’Brien said. “When I was in Cary, there was a Salvation Army unit that came to our fire scenes.”

The volunteers keep a close eye on firefighters and their core temperatures.

“As a former firefighter, I know the toll of all the heat and smoke,” Mignogno said. “As a general rule, firefighters are kind of proud sometimes of what they do and for how long they can do it, but sometimes it can be too much.

“We want to be there to make sure (firefighters) are hydrated (and) that they take a little break before going back in.”

By 1974, Box 15 had acquired its first truck, and in the 1980s, the organization partnered with the Salvation Army to use one of its mobile kitchens at fire scenes to expand its reach, O’Brien said.

The volunteers, who are available 24 hours a day, seven days a week, are dispatched by the Northwest Regional Emergency Communications Center in Dublin, the Metropolitan Emergency Communications Consortium dispatch center in Mifflin Township and others to all active fires, but they also respond to any working scene if the heat index exceeds 90 degrees or if the temperature is below 10 degrees, O’Brien said.

The organization’s name dates back to June 1947, when a pharmacist named Max Haverman gathered 14 of his friends who all shared a desire to assist the Columbus Division of Fire.

Box 15 still relies on donations and grants provided by individuals, corporations and the agencies it assists, O’Brien said.

“We also sell T-shirts at our events, but those have been off this year because of (the) COVID-19 (coronavirus pandemic),” O’Brien said.