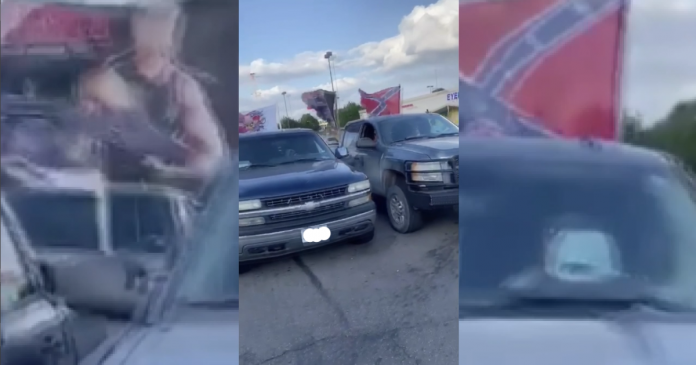 WACO, TX — A Waco woman says a case over the weekend in Waco shows some McLennan County teenagers have a lot to learn about common decency and racism.

Any other day, this might be a story about free speech.

But two McLennan County teenagers chose to exercise their free-speech rights in a public shopping center parking lot on Juneteenth, and they did it with what some consider hateful, racist symbols.

On Friday, Denise Anderson says a trip to a department store turned into assault, at the hands of Confederate flag-sporting teenagers in their pickup trucks.

“They called me the ‘N word’ on the way into the store. They blocked me off, shoved me in the shoulder and went back to their car to proceed to call me a half-breed,” said Anderson.

The alleged attack left her, shocked, violated and now… afraid.

“I worry about my safety and my sister’s safety. I don’t feel comfortable going out in public,” she explained.

Anderson did the only thing she knew she could do safely, she took out her phone and recorded them, hoping some kind of constructive lesson might come of the encounter with the boy’s parents.

A posting online got hundreds of comments.

“I would accept a sincere apology. I have not gotten one yet,” she said.

We couldn’t get one for her either.

One truck comes back registered to a Robinson couple who have two teenage boys.

The family claims their son was out of town Friday and have video to prove it.

Our multiple attempts to reach them in person and on the phone got us no response, and no video to back up their claim.

In a social media post, the mother said, “our family acknowledges that a ‘southern heritage’ flag is hurtful to some and was posted in poor taste on our son’s truck.” They still deny he drove the truck in Waco that day.

The other truck comes back registered to a Lorena family also with two teenage boys.

25 News found the truck parked next to the family’s home in Falls County.

One of the boys was home but in no mood to talk.

“Ah, we are not, we would not like to talk about that,” said the young man who answered the door.

Both families apparently sticking their heads in the proverbial sand which troubles Anderson.

She believes, in 2020, when people of all races and backgrounds join in protest over violence to minorities, her incident makes clear that some people still haven’t gotten the message.

“When we ignore incidents like this what are we saying? We’re saying that it’s ok, that it’s ok to be racist, it’s ok to do that in our community, and that it’s acceptable,” said Anderson.

People we talked to called the incident in the parking lot racist at worst, and insensitive at best.

They hope this sparks a conversation between all parents and their children about what’s appropriate, and the trouble a display like this can cause in terms of other people’s fear for their safety.